Can We Get Four Road Beers?: Hawks at Predators Preview, Pregame Thread, Jumanji

Have to say I don’t remember the Hawks ever playing a Sunday game in Nashville. In fact, I don’t remember them every playing an away, Sunday evening game anywhere other than Vancouver, but you all can correct me on that. Seems like Sunday nights are a home tradition, but such is the schedule concoction this year.

Over the next couple days, you’ll hear the traditional, roll-out-the-cliche drivel that the last game of a road trip and the first game home after a road trip are so hard on teams. We heard it so much last year the talk may have actually caused the Hawks to mail in a couple of these, not the other way around.

Whatever the case may be, the Hawks have already had a successful road trip at 3-0-2. Going without a regulation loss at all on this sojourn would be somewhere around delirium. Especially considering there’s seven straight at home after this (even though there are some spiky opponents on that stand), the Hawks could really set themselves up in February.

Of course, Nashville hasn’t exactly been a pleasant place for the Hawks. Last year was especially a horrific, where they got tonked once (starting the February Trail of Tears), lost a heart-breaker when Ray Emery couldn’t stop a clear point shot with two minutes left (the last of the Trail of Tears), and then a win where the Hawks blew a 4-0 lead that didn’t much feel like a win.

Lineup changes are that Corey Crawford will take back the cage, and Michal Rozsival is recovered from his leg thing and will replace Sheldon Brookbank (or as he’s probably going to be known soon, “The guy Hawks fans complain about because there’s no one else to complain about”).

The Predators remain what they’ve kind of always been the past five years or so. A statistical anomaly that defies talent level and numbers to still be good. They’re the Hawks’ closest pursuers at the moment in the Central (though that could change with Scum playing as the time of writing). After a pretty putrid start, winning one of their first six, the Preds ripped off four in a row (two wins over the Kings along with conquerings of St. Louis and San Jose) before losing in OT last night to Minnehaha.

But much even more so than last year, this team is borderline garbage at even-strength. To illustrate how much, they don’t have a single player outside of gargoyle Brian McGrattan who is on the positive side of the CORSI per 60 ledger. Not one. And this year unlike last year, their special teams are middling. In fact, the Preds are dead last in shots per game at 21.5, which is a full four shots behind the team in 29th.

Obviously, the big issue for the Preds this year, other than drying Shea Weber’s tears, was replacing Ryan Suter. Roman Josi has taken his place alongside Weber at even-strength and on the power play. The Preds use seven d-men regularly, with professional construction horse Hal Gill pretty much only featuring on the penalty kill. You’ll only really see Jonathan Blum on the power play.

But you can’t ignore the hole forever, especially when it means Scott Hannan is getting 20 minutes a night. Scott Hannan was finished like three years ago, and you have to make the Preds pay for desecrating the dead and trotting Hannan out there. Ellis and Josi are still developing and heavily shielded — though promising — and Kevin Klein is as serviceable and unspectacular as you’d expect someone named Kevin Klein to be.

Up front it’s the same cast of grunts and gnats and rashes you’ve come to know and loathe for a long time now. Colin Wilson is having a productive year as leading worker-bee, along with human flu-bug Martin Erat (he even looks like one). They skate hard, they don’t make mistakes, they capitalize on turnovers, blah blah blah.

You all could write the rest here, so familiar are you with the drill. The Hawks have to be clean out of their zone and can’t just try and shovel their way out along the boards. Chip ins and cross corner dump-ins are the order of the day, the better to win races against a now-slower Pred defense. Don’t give Weber too many chances to launch his Doomsday Gun on the power play. Do these things, and the Hawks vast superiority at 5-on-5 should shine through.

But we say that every time. 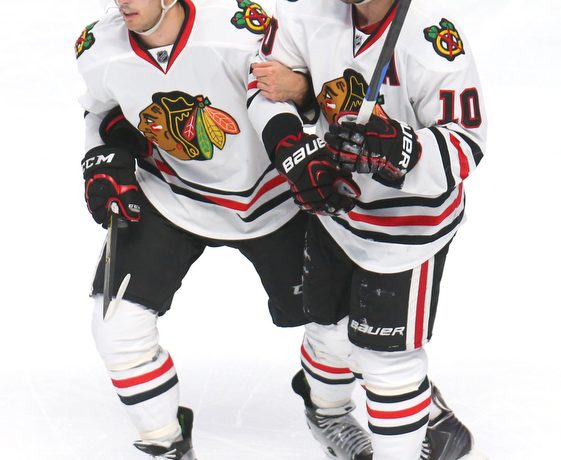