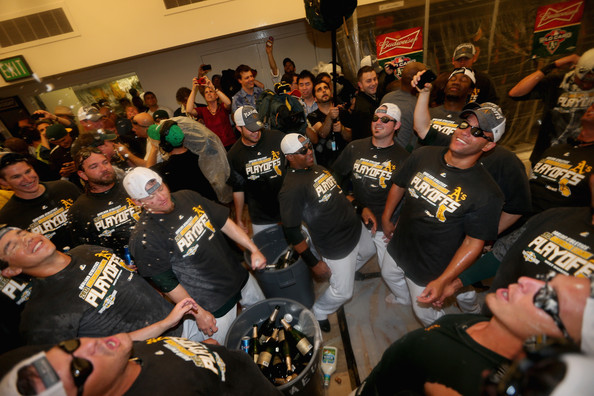 Even though it’s an abnormal October in that we should be getting ready for the start of the season in just over a week, it’s business as usual as October won’t see any playoff baseball in the 606. That’ll be the fourth straight year that has occurred, after seeing at least one team pop its head in for a look five out of seven seasons. For Chicago, that’s an avalanche of postseason play. But with no hockey, you’ve got to fill the time somehow.

Similarities to hockey – The only thing this month will match for your hockey instincts is the passion, and only just barely. And that certainly won’t be coming from Atlanta or New York, at least until the World Series because Yankee fans can’t be bothered until then. But everyone else should be pretty pleased with what they’re doing, especially in Oakland and Baltimore after miracle seasons.

Time consumed – Well, it’ll be every night but it will only be a month. With the lockout almost certainly going past Thanksgiving, this will the be the methodone for your heroin habit. Only temporary relief but you’ll feel great while it’s kicked in. The comedown is going to be rough though, because once the WS is over, all that’s left is AHL hockey and basketball. Yeah, not good.

Ability to imbibe during – It’s fucking baseball. The sport wouldn’t exist without beer.

Rooting interest – Boy is this one hard. Sox fans certainly won’t be putting on any Tigers gear, and any Cub fans who want to do so in appreciation should remember A) The Tigers were so mediocre they needed the Sox to have a team wide embolism to even get past them and B) Tigers fans only put on their Orange and Blue for three hours before going home and donning their Red Wings gear. Still, it’s pretty hilarious that Detroit outdrew the Sox by almost a million fans. The excuse of the economy or the perceived dangers of Bridgeport ring hollow when you hear that.

The Cardinals? See above.

Baltimore is a great story, though they greatly alarm stat-heads like myself because everything indicates they should have been under .500. And who doesn’t have a soft spot for anything good coming out of Baltimore if you’ve watched The Wire?

Washington? If they were still the Expos, this would be the obvious choice. But you can’t root for an organization that left Youppi behind and expects us to forget that because they let Teddy Roosevelt win a race.

The Reds? Eh. While we all would vote Brandon Phillips President Of The World for calling the Cardinals “a bunch of little bitches” (no truer statement has ever been uttered in the history of everything), they’re still managed by Johnny B. And while I don’t want to pile on a man who just had a mini-stroke, I’m still going to. It would be too hard to see him win somewhere else when he proved to be a paranoid dolt here.

Braves? They don’t care, why should we?

Giants? Not a bad choice. Definitely some edge here, recent pedigree, and the most aesthetic stadium in American sports, most likely. This year though, you’re probably only set up for heartbreak. Timmy Smoke isn’t Timmy Smoke this season, Buster Posey is the only one who can hit the ball to the warning track and will probably set a playoff record for intentional walks by Game 3. But Cain and Baumgarner can take them far enough, and it’s still Dusty in the other dugout.

Rangers? Any team that has to bend over that far backwards to let the Cardinals break their own record for worst team ever to win a World Series is not worthy of respect. And Ron Washington may be a bigger idiot than Baker. At least he’s more coked up.

Oakland? This is where I’ve landed as most of you know, but I’ve had an A’s fetish since high school. They’re always young and hairy and tattooed and there’s a punk rock sensibility from team and fanbase. So that appeals. But like the other Bay Area team, they’re going to struggle to hit anything outside of Cespedes, and they don’t have dominating pitching rather than just effective. But they do have a dominating pen, and just something about them that led them to have a ridiculous season. And doing the Bernie Lean is just stupid amounts of fun. Whatever, probably cannon fodder for the Yanks in the ALCS, which is something of a tradition for Oakland.

Lockout Distraction Effectiveness – 7. If you’re already a baseball fan you can lose yourself in this and kind of forget there’s no October hockey. But if you’re not then you probably won’t care at all.