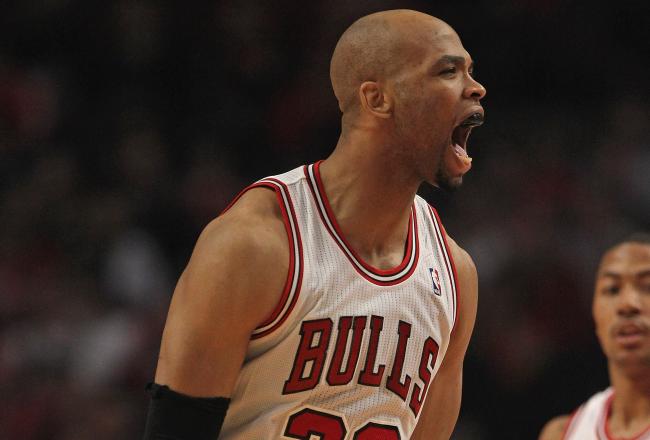 Yeah yeah, I know all about it. Basketball’s boring and played by a bunch of lazy gangstah-rap wannabes. I’ve heard it all before. Most of what I hear from hockey fans about basketball is crap, some of it is not. Whatever. We still have to fill in the time, unless you really want to start going to all those movies and plays with your significant other and I know you don’t. And none of the other options we’ve discussed here come in the four major sports — though the day is coming, and sooner than we think, when MLS is considered more of a major sport than the NHL. But the Fire bit the dust last night anyway so there’s another fucking gap we have to fill in.

So let’s just do this and be done with it.

Likability: For just this Bulls team, it should be pretty high. And for reasons that a lot of Hawks fans would actually agree with, though I don’t know how many that actually read this blog and have more than half of a brain. For all the complaints I hear about Patrick Kane or Marian Hossa being lazy and overpaid because they’re stars who make the game look easy, then here’s a basketball team full of grunts for you. Thanks to Derrick Rose’s knee turning to chewed up Doritos last spring in a game that was already won, the Bulls are without their one true star. So until he gets back in March or April or not at all, the Bulls are going to have to do it through defense and effort, two things that draw a lot of water in this town.

The problem is, it probably won’t be all that fun to watch. The Bulls are exciting when Rose is making everyone look stupid and driving to the hoop at will and coldly putting teams away by himself. Watching Joakim Noah dry hump three layup attempts to make one and then scream or Rip Hamilton run through 17 screens while trying to keep his hips from falling off would be the opposite side of the spectrum. But you’ll know you’re going to get a premium amount of effort. They’re well-coached, and Nate Robinson will be fun in the meantime until those with basketball IQ figure out he can’t defend dried vomit or can get selfish on offense. But that little guy can jump!

But I get it. It’s still basketball, and I think I’ve gotten to the  heart of why people don’t like it, or at least say tune in for the last two minutes. If we strip away all the veiled racist reasons, the thing about basketball is if you’re excitement was mapped out on a graph, you wouldn’t see any spikes. It’s not that these guys aren’t defy-explanation athletes, because they are. Do you realize LeBron is as big as Karl Malone? Imagine The Mailman trying to play LeBron’s game. It’d look like when your dad try to dance when you were a kid to convince you he was cool. Kevin Durant is 6-10 and plays a shooting guard’s game better than any shooting guard out there. It’s silly. If you can appreciate that, you’ll enjoy it more than you think.

But the problem is that when LeBron flies over three guys to finish, that’s only 1/45th of the points his team will score that night, or so. It’s not a definitive moment in what determines the game. Or it’s one of many, which of course makes it not definitive. The graph would slowly climb in the 3rd or 4th quarter, not spike like when a big goal or save is made. A bunch of stuff happens and then there’s a winner. The last two minutes aren’t all that defined from what came before it, or they sure as hell don’t look any different.

The Fans: Yeah, this is an issue. I can’t even lie about this one. I know some passionate, knowledgeable Bulls fans, even the ones outside my own family. The problem is they are just drowned by the Deerfield crowd who actually think Noah has a floor-game or that Deng can create his own shot (neither is true). In fact, I would wager that if you were to measure passion vs. knowledge of their sport, Bulls fans would finish last by some margin. But hey, boss’s tickets!

Tickets/Game Experience: The Bulls sell out every game but then I’ve never heard of anyone having trouble going when they want to. Secondary market and all that I guess. But an NBA experience is insufferable. You think Taint Nugget is bad? At least they don’t play DURING THE FUCKING GAME! A constant stream of noise and bullshit and crowd meters and you wonder if the actual game is even that important. The only way you can stand it is if you get really good seats so you can appreciate just how massive and quick these guys are, and how truly ugly the Luv-A-Bulls are.

Prospects For Glory: Almost none. Even if Rose was healthy, this team is perfectly set up to get clocked by Miami for the next five years. They only have one truly great player and he’s rehabbing at the moment. They will have to work so hard to score against teams interested in defending. They don’t have the bench they did last year. They’ll rely on out-working teams already hungover or looking forward to being hungover, and that’ll be good enough for them to scratch out a middle-seed. If Rose is healthy they can probably notch a series win, and then LeBron is going to put his balls on their collective head and that will be that. But they’ll try really hard, promise. In fact, their front office seems to realize this, and is in the middle of a multi-year pivot to give themselves the flexibility to get the second superstar they need to compete, either through draft, trade, or free agency. But you’ll have to wait.

Blog Strength: Blog-A-Bull at our old SB stomping ground is not bad at all. They’re probably not as tolerant of the shit we do here, but if you want to be informed then you will be. Past that, I can’t help you, and The Ombudsman’s basketball answer to The Indian for every home game, “The Electric Matador” is very far from reality.