Living in the Past: Oilers 6, Blackhawks 5 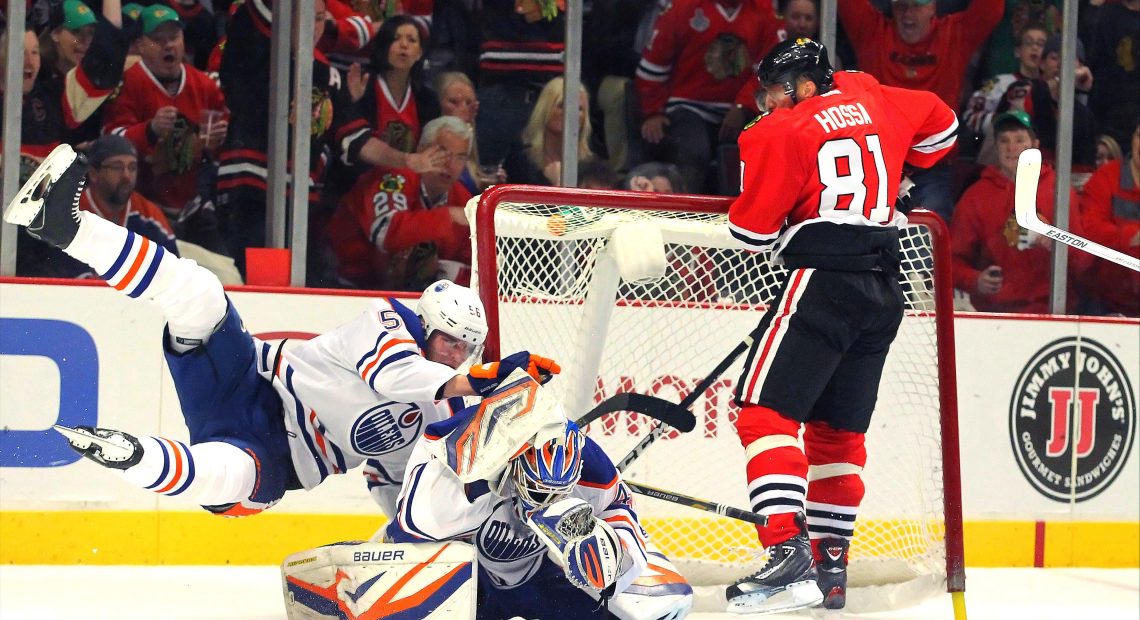 One of the pleasures of a 29 game point streak was the lack of hockey cliches used to describe the Hawks poor play.  Flat, lifeless, fatigued, blah, blah, blah.  Well no more.  After a Edmonton 4 goal first period, all the cliches are back in full force.  Luckily, you won’t find that here.  Rather, let’s break down the first 4 goals to help show why the Hawks were down four after 20 minutes.

Edmonton’s 5th and 6th goals were carbon copies on the power play with tip passes that when executed properly are impossible for any goalie to stop.  As for how the Hawks penalty killers could have defended against it, there’s a couple things that could’ve been done.

When the Oilers power play spreads out, the Hawks penalty killers open up seams through the middle of the ice.  With the Hawks playing a passive style, it gives the players on the wing plenty of time to find the guy in the slot.  Perhaps playing more aggressively would force the opposition into rushing decisions rather than giving them ample time.

Something that should be noted on the second goal was Brandon Saad’s lack of rotation.  As Edmonton swung the puck across the points, Saad backs off and skates into….oblivion? By just floating towards the other point, he essentially leaves Niklas Hjalmarsson left to cover three guys.  End result, Edmonton goal.

Another way to defend it would be the forwards taking away the angle of the pass instead of preventing a shot on goal.  With Edmonton setting up a guy in the slot and no one really screening the goalie, the Hawks would be better off giving the Oilers a clean shot on net from 40 feet away than giving them a slam dunk.

One thing is certain, though, that shouldn’t happen two times in a game.  The first time it happened, that’s just a nice set up by Edmonton.  The second time, though, it has to be anticipated.

While I’m sure there will be screaming to just clear out the crease to defend against it, any one who has watched Joel Quenneville coach over the past four and half years should know that’s not going to happen.

–How stupid was Jamal Mayers penalty? Answer: very stupid.  But hey, he swung the momentum.

–I doubt I’m the only one who feels this way, but I would much prefer the Hawks go with a ‘kid’ 4th line and mix and match that way, rather than continue to rotate a three-headed monster of Dan Carcillo, Jamal Mayers and Brandon Bollig.  While the Hawks can get away with playing Carcillo on skill lines 15% of the time, the other two guys can’t.

Jeremy Morin, Ben Smith, and Brandon Pirri are all playing some of the best hockey of their professional careers.  They’re all seasoned veteran AHL players.  Having them 6-10 minutes in the NHL is not going to stunt their growth at all.  And best of all, if you fall down a few goals early, they don’t automatically have to be buried at the back of the bench.

And hey, two of those three can win a face-off from what I understand.

–You didn’t really think Corey Crawford and Ray Emery were going to have a 95% save percentage all year did you? As if it would ever be that easy.

–The game was wildly entertaining and a lot of fun to watch.  At least for the last 40 minutes for Hawks fans.  The Hawks were victimized by a few mental mistakes and unlike we’ve become accustomed to, their goalies weren’t up to the task of bailing them out and/or the opposition didn’t miss on their opportunities.

This is what happens during a regular season.  After 29 games of getting a point, I feel like this point needs to be reinforced constantly as we close out the second half of the season.