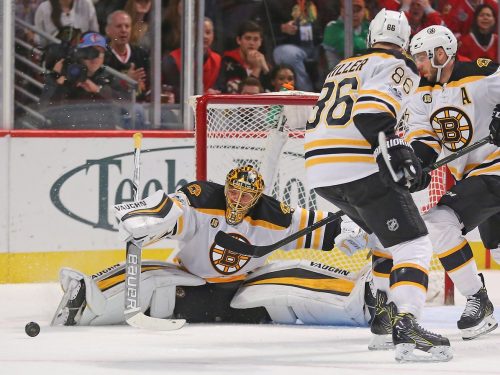 You know what would be nice? If one day the NHL had the tires and the stock to tell NBC that these 11:30 starts are a god-awful advertisement for the sport, and if either side is truly interested in growing the audience from more than just the die-hards and fans of each team they’ll find a way to get these moved to 2:30 or 3. Not that a different start time would have saved this one, as the Hawks have nothing to play for and spent most of the game looking exactly like that. But the combination, and that the Bs played yesterday, made for some real dross in the first 20-30 minutes.

At the end, the Bruins got two points they needed a hell of a lot more than the Hawks, and Panarin got closer to his bonuses. That’s one of the few things left for the Hawks to play for these last three games. No, I’m serious.

-Ok, I was wrong about John Hayden. I think everyone should always take players who spend all four years at college with a grain of salt, but this one looks to be a contributor. He’s not Jimmy Hayes, where he’s actually strong on the puck instead of just being unwieldy merely due to his size. He’s good in the corners, and at least hints at some offensive instincts. Hell, if your’e setting up TOOTBLAN so he can’t miss, there must be something about you. Him and Kero on a 4th line in the playoffs, with Jurco and Rasmussen flipping the other spot (no, no more TOOTBLAN) would be a fine way to be.

-You could tell how much the Hawks were interested in this one to start as Panarin and TVR both merely waved at only Brad Marchand to set up only Patrice Bergeron for the Bruins second goal. Ok, this is TVR’s way but you’d like to think when the games really count in 10 days Dimebag might try a little harder.

-Honestly, the only thing that’s going to derail the Hawks before June is if Duncan Keith simply falls apart. Getting walked by Dominic Moore didn’t inspire confidence, but again who knows how much any Hawk was really paying attention today. Still, with Oduya looking very much second-pairing at best, the Hawks are going to need more than Seabrook’s outlet passes to generate offense in the playoffs. If Keith isn’t getting the best of what he sees, no matter the competition, things could get sticky somewhere along the line. A 29% Corsi today is another that makes you pause.

It’s just going to take me a minute to figure out which team is actually going to make it sticky. Ew, that sounded gross.

-Even with only paying attention for maybe half the game, the Hawks still threw 43 shots at Khudobin, against what will probably be a playoff team in the East. Almost messed around and got a triple double.

-When you’re Brad Marchand and you have back to back 35+ goal seasons, do you really need the bullshit anymore? Because I don’t really think that bullshit adds to his goal-scoring at all and you’re always going to dominate possession when you’re out there with Bergeron.

-Not much else to learn from this one. In fact, you’re probably better off taking the week away and reconvening for the playoffs. These three games could be high comedy in their apathy.