High On The Hog: Impressive Debuts 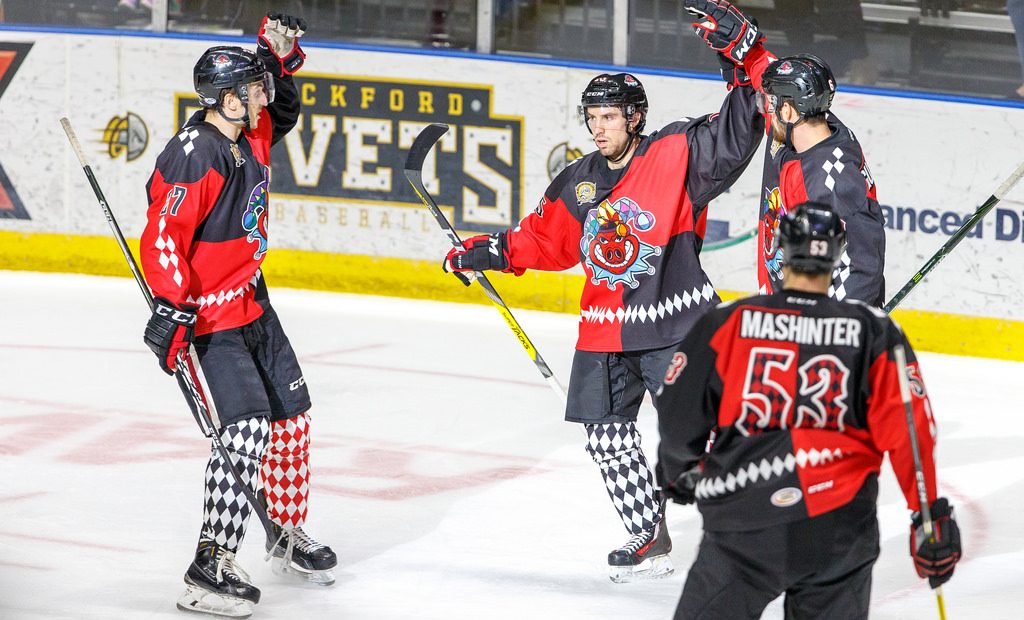 The Rockford IceHogs picked up a pair of wins this weekend thanks to the play of their two newest players. The Hogs signed a couple of skaters to ATOs this week; both had an impressive debut weekend.

The headline signing was that of the Blackhawks 2014 third-round selection Matheson Iacopelli, who signed his amateur tryout on the heels of his signing an entry-level contract with Chicago. The 6’2″ forward has big offensive upside and showed a bit of it in his first game with Rockford.

Iacopelli displayed a big shot several times over his first two games, most effectively on what was the game-winner over the Texas Stars Friday night. As advertised, Iacopelli showed a knack for getting into scoring areas.

Also as advertised, he showed that he still has refining to do on the defensive end. The Stars lone goal came in the second period Saturday when Iacopelli was a bit too casual covering the front of the net. This allowed Colin Campbell to squeeze by him for a tip-in.

Iacopelli, who leaves Western Michigan after two years, had 20 goals and 16 assists in 40 games with the Broncos this past season. He spent most of the weekend skating with Michael Latta and Evan Mosey.

Also signing an ATO with the IceHogs on Thursday was free-agent center William Pelletier, who was the First Star of Saturday’s 4-1 victory over the visiting Grand Rapids Griffins. In his second game with the team, Pelletier had a two-goal, four-point night.

Pelletier, 24, just finished his college career at Division III Norwich University by winning a national championship with the Cadets. In 83 collegiate games, Pelletier scored 126 points (53 G, 73 A). That includes a senior season of 18 goals and 28 helpers.

The 5’7″ speedster is looking to secure employment next season. Based on what I saw this weekend, the guy can play. Pelletier was noticeable on the ice in Friday’s win despite not breaking into the scoring column. He generated several chances for Brandon Mashinter and Luke Johnson against Texas before lighting it up with those same line mates against the Griffins.

One weekend does not a season make. Still, it was good to see some offensive capability on a team starving for it on a nightly basis. Many of these ATOs are going to form the nucleus of the 2017-18 IceHogs. As expected, it would appear that squad will be a younger group than the one that came before it.

Often, the BMO’s public address announcer will recognize returning players or point out a milestone to the fans. There was reason for such announcements during both home games this weekend. The execution just wasn’t on point.

Friday saw the return of Mark McNeill, who spent several seasons with Rockford and was traded just a few weeks ago, to his old stomping ground. This could hardly have escaped the team; McNeill started the game for Texas and took the opening faceoff.

One would expect that a recently traded player would get at least a cursory shoutout. Eventually, McNeill received a nice bit of acknowledgement from announcer Chris Toltzman. The timing could have been better; the announcement came late in the third period as McNeill was lining up for a crucial offensive-zone faceoff with his team down a goal. (If you speculated that there were Rockford fans who went online to pout about McNeill not backing out of the draw so he could wave to them, you would be absolutely correct.)

The IceHogs whiffed on another opportunity the following evening. P.C. Labrie had been named Rockford’s nominee for the league’s Man Of The Year Award, as I mentioned in an update to my post last week. Labrie was a scratch Friday but was in the lineup for Saturday’s game with Grand Rapids. Alas, Labrie was not recognized for his recent honor during any of the media stoppages throughout the contest.

Perhaps the team was waiting to make an announcement at a later game; surely he’ll be recognized at the Hogs final home game April 15 when a slew of other team award winners will be on display. It was a bit surprising that with ample opportunity to recognize a fan favorite, the IceHogs chose not to do so.

The Hogs losing streak reached four games as they were shutout for the second straight contest. Iowa got a hat trick from newly signed forward Luke Kunin to pick up the win.

Kunin’s first two goals came early in the opening period. Iowa took a 1-0 lead 3:o2 into the game when a stretch pass from Nick Seeler started a 2-on-1 that ended with Kunin gaining entrance to the Hogs back door via a pass and return with Sam Anas.

At 8:44, Kunin picked off a pass attempt by Ville Pokka and started into the Rockford zone with numbers. Maxime Fortunus got off a shot in the high slot area, which was redirected by the rookie past Hogs goalie Mac Carruth.

Rockford had six shots at the power play throughout the evening to get a puck past Iowa starter Alex Stalock. Each was unsuccessful. Stalock stopped a breakaway attempt by Jeremy Langlois late in the second period that might have gotten the Hogs back into the game.

Instead, Alex Tuch slammed the door on Rockford early in the final period, driving to the net and backhanding the puck into the upper corner of Carruth’s net. Kunin completed the hat trick with an empty netter with 1:16 remaining.

The IceHogs broke their losing streak, thanks in part to Matheson Iacopelli, who potted the game-winner in his first game in Rockford.

Texas scored first when Caleb Herbert converted on a penalty shot 8:17 into the first period. The IceHogs evened things up on the power play 35 seconds into the middle frame.

Brandon Mashinter took a big whack at the puck from the top of the right circle. The shot caught the top far side corner of the Stars net for the equalizer. Rockford dominated the action in the second period but was unable to get another puck past Texas goalie Justin Peters.

The key sequence in the contest occurred midway through the final period. Iacopelli’s first pro twine-tickler was set up in masterful fashion by Michael Latta. Latta received a pass from Evan Mosey, who had won a battle for the puck in the left corner of the Stars zone. Unable to get off a shot at the left post, Latta dropped a pass back to Iacopelli in the slot. The rookie knew just what to do with it, and Rockford led 2-1 at the 9:21 mark.

A delay of game penalty gave Texas a late power play and a chance to tie. The Stars called their timeout and pulled Peters for a two-man advantage. However, Jake Dowell got to a loose puck and converted on the empty-net opportunity to wrap up the contest with 22 seconds left.

Tyler Motte left the game early in the opening period after being hit with a puck. Bleeding profusely as he skated off, Motte did not return to action.

Iacopelli, Johansson, and Mashinter were voted the game’s three stars.

Saturday, two goals from William Pelletier helped propel the Hogs to a rare victory over the Central Division leaders. In fact, Pelletier figured in all four tallies as Rockford won its second in a row.

Midway through the first period, Brandon Mashinter traded passes with Pelletier coming into the Grand Rapids zone. Mashinter then found Kyle Baun in the high slot. Baun stuck the biscuit into the upper corner of the Griffins net at 8:31 for a 1-0 IceHogs lead.

Less than three minutes later, Pelletier found himself in front of the net on a Rockford power play. His redirect of Erik Gustafsson’s shot zipped past Griffins goalie Eddie Pasquale and settled into the net. 11:20 into the game, the Hogs held a 2-0 advantage.

The Griffins cut the lead to 2-1 midway through the second period on a Colin Campbell goal. However, Pelletier’s line got right back to work. Mashinter got hold of a loose puck in the Grand Rapids zone and found Pelletier alone in the slot. Taking plenty of time to line up his shot, Pelletier beat Pasquale and made it 3-1 IceHogs at the 14:03 mark.

At 16:23, Luke Johnson got in on the fun. Pelletier got control of the puck in the corner of his defensive zone and sent it behind the net to Luc Snuggerud. The rookie defenseman brought the puck up the right side and sent a long pass that Johnson hauled in before crossing the blue line and firing past Pasquale.

The third period got physical as the Griffins attempted to cut into the lead. Martin Lundberg was the recipient of a big hit by Dominik Shine. Jeremy Langlois took offense and engaged the Griffins forward. Lundberg skated to the dressing room and did not return.

A few minutes later, another altercation resulted in 10 minute misconduct penalties for Dylan McIlrath and Mitch Callahan of Grand Rapids, along with P.C. Labrie and Michael Latta of the Hogs. Despite being a bit short on the bench, Rockford closed out the Griffins.

For his four-point evening, Pelletier was named the game’s First Star. Mashinter, who had three helpers, was the Second Star. Jeff Glass stopped 36 of 37 Griffins shots to nab Third Star honors.

Rockford will be on the road this week, starting in Iowa Thursday night. The Hogs then visit Milwaukee on Saturday night before finishing their season series with the Chicago Wolves Sunday afternoon.

Occasionally I have a lucid thought concerning the IceHogs; follow me @JonFromi on twitter for your chance to view it when it pops up.