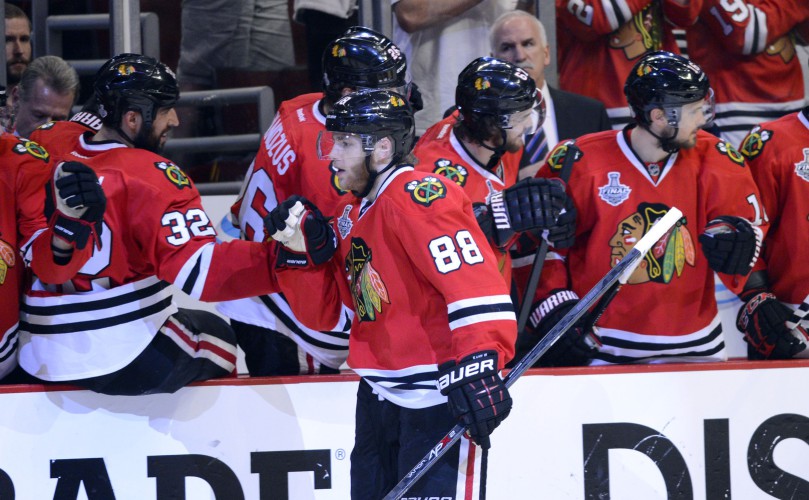 I remember this from three years ago.

I remember when they flash that “1” all around the U.C. I remember the chills you get when you see it. Because though we spend most of our days dreaming about the Hawks winning The Chalice, and though that thought infuriates our bosses or significant others or whoever else because you are pretty much useless in any other way when thinking about it, when you see that “1”, it becomes all too real. It’s right there. You feel like you can touch it. It’s not just theory any more. It’s like when you first step into that girl’s/guy’s apartment that you’ve been chasing for so long. It’s not just a dream or a wish. There’s so little to execute now to have what you dared not speak of before. IT COULD REALLY HAPPEN AND OH MY GOD JUST BREATHE AND ALL I HAVE TO DO IS NOT CRIMINALLY FUCK UP AND….

And yet…there’s still so far to go.

-There’s no point in going much farther without discussing the main storylines coming out of this one, and that’s the injuries to what may be the two best two-way players in the game. Patrice Bergeron didn’t make it out of the 2nd period, and Jonathan Toews wasn’t seen in the 3rd except on the bench as a decoy. Bergeron’s injury is the more nebulous, because he wasn’t hit or felled in any way and still ended up in the hospital. That’s kind of scary. It’s easy to identify Toews’s problem, a hit from Boychuk that in the regular season would likely draw a suspension. But if it does now I’d shit a chicken. Boychuk’s hands were high, it was from behind, it was to the head….seems all the parameters are there. But don’t sit on a hot stove waiting for punishment.

While you want to be tempted to say if neither make the bell on Monday it’s a push, the B’s still have Krejci, Peverley, Kelly, and Paille and Seguin can both play center. The Hawks don’t have that depth down the middle. But then again, if Toews can walk you feel like they’d have to chain him in the hotel to keep him from playing. No one knows.

-On to the fabulous defensive effort from the Hawks. Without their only plus-faceoff guy, they still won a majority of the draws. Protecting the slimmest of leads, the Bruins only had a few looks here and there and the Hawks mostly swallowed up what lanes were there. Sure, there were some scrambles that made the execs at Alka-Seltzer happy, but not consecutive glorious saves from Crow because he didn’t have to. Some of this was driven by Bergeron’s absence, as only Krejci’s line really sustained any pressure. But the Hawks locked it down, which they really haven’t been able to do all series. They kept Boston mainly to the outside and best of all they closed down the points furiously, which they did not do in Game 4.

-Chara was better tonight, but he still was on the ice for both Hawks goals that came with Rask in net. The Hawks finally got the kind of bounce the B’s did in Game 4 when Oduya’s shot shredded Seidendberg’s stick and then found its way to Kane, but that was hardly the first chance that line created. Chara couldn’t get to Bickell either for his first attempt or his ring around the net leading to Kane’s second. And now he doesn’t get the extra day of rest.

-Speaking of Chara, I think it’s utterly fucking hilarious that he gets knocked on his ass by Bickell and then Lucic feels the need to run to his aid. CHARA’S 8 FEET TALL!!!

-The B’s definitely backed off their 3rd forward in on the forecheck to keep the Hawks from hitting the neutral zone with such speed. However, when the Hawks had good puck support and had precision with their passes, they still hit the B’s blue line with speed and created problems. I’m not sure there’s anything the B’s can do about it.

-Is Brad Marchand playing in this series?

-The CORSI’s say Brandon Saad was a -1. And yet I still feel like he was absolutely everywhere tonight.

-DAT PATRICK KANE HE DON’T LIKE TO DO TO DA NET AND DATS WHY DEY SHOULD TRADE HIM FOR PICKS SO WE CAN RE-SIGN DAT BICKEL-MAN!!! Don’t look now, but Kaner is in the running for the Conn Smythe.

-Hey, Nick Leddy almost made it to seven minutes!

There’s only one natural one left…but I doubt the Hawks will make it easy.