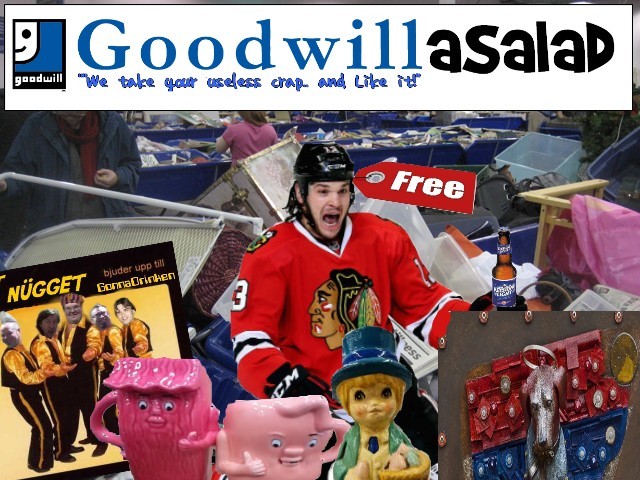 This one comes from hero of the people and at least our 15th favorite Irishman MightyMikeD.

In ways, I’m blessed. I came to Blackhawks fandom at exactly the same time as things started to get really good. Therefore, while I’m familiar with the failings of worthless ex-Hawks like Adrian Aucoin and James Wisniewski, I only know them as opponents and have never had to choke back tears of rage as they fumble around in an Indianhead sweater.

Likewise, I missed the “careers” of the bad players on a bad team, back in the bad old days. Choads like Adam Burish and Ben Eager helped the Hawks to a cup and then they were gone..

In “my” era, the likes of John Scott and Brandon Bollig have been the dregs of the team but, as Sam has pointed out, their failings have been covered many, many times over. Likewise, taking potshots at what’s left of Nikolai Khabibulin  seems uncalled for.

So I’m going to have to plump for Daniel “Gorilla Salad” Carcillo.

I know, I know “Too Obvious”.. however, the reason I have an especially bad taste in my mouth after Carcillo’s time in Chicago is slightly unusual: just for a moment, in the early part of the 2011-12 season, we got a look at the player that he could have been if he’d just cut out the stupid shit. And then it all went to hell.

We were already familiar with Gorilla Salad the Flyer and no-one outside of the meatball contingent greeted his signing with much enthusiasm. He was already suspended for the first two games of the season thanks to running his mouth at officials while still in Philly. Then Q threw him out against Winnipeg with Patrick Kane (as a center.. remember them days?) and Marian Hossa and.. wow. It clicked. Kane and Hossa each scored and Kane added two helpers as the hawks came back from 0-2 to win 4-2. Carcillo even skated away from a fight (I’ve forgotten which Jet it was.. too much booze)

That line was christened “KaHossBomb” or sometimes “KhaosBomb” and the trio made several other notable cameos in the first half of the year. Carcillo was still more than capable of accumulating PIMs, but he seemed to have curbed the worst of his instincts and even appeared to be genuinely relishing the chance to show that he has skill beyond his agitator/asshole reputation. He seemed to be flourishing now that he was partnered with excellent players.

We all know what happened next.

On the second day of 2012, during a 4-3 defeat to the Oilers, Carcillo lined up Edmonton Defenseman Tom Gilbert for a pointless, vicious, dangerous hit against the boards. The DoPS handed down a seven game suspension., but Carcillo had damaged his own ACL, ending his season there and then. He was given a contract extension, for reasons best left unexplored, but only played 23 more games for the Hawks before being shipped off to Los Angeles.

And that was what stung: we had seen Carcillo get a glimpse at redemption and yet he couldn’t resist diving back into the sewage. I remember (and I wasn’t alone in this) feeling more saddened than anything, at the time. He had a chance and he deliberately pissed it away. He’s since gone on to play his own style of garbage hockey in LA and New York. As of this writing he’s an unsigned UFA and his NHL career may be at an end.

And for that, more than all the other very valid reasons, he’s likely to remain the Blackhawk I recall with the very least affection.