WHERE YOU SHOULD WATCH: At The Piggery (Irving and Ashland) With Us

For the second time in a week, the Hawks will look to bounce back after an ugly loss, however bad you actually believe Tuesday’s loss to be. On Sunday, they returned from the skewering in Nashville to smother the Sharks. Needless to say, the Jets are not the Sharks. See what I did there?

Let’s get the Hawks news out of the way. First, Marian Hossa is going to play, though one can’t escape the feeling he’s being a bit rushed thanks to Bryan Bickell’s injury and the seeming refusal from Stan to call anybody up due to cap concerns. . Note: Didn’t realize Morin had been recalled yesterday, but I have no idea if he’ll play tonight ahead of Brookbank. Even though he clearly should, as his best game this year came in Winnipeg.  Hossa looked labored on Tuesday’s skate according to Lazerus, but better today. We’ll see. Once again, Sheldon Brookbank gets to thrash about at forward for six shifts.

Second, Corey Crawford looks to be starting, even though we all want to see Raanta give him a breather. Q probably thinks Crow needs a pick me up after getting yanked, and might consider his not even one period of work a rest in itself. Whatever, we all knew that Q would think these two points are vital after losing in Colorado, so no one’s surprised at this. It’s dumb, but it’s not surprising.

As for the Jets, after getting their asses rubbed in the moonshine here in Chicago a couple weeks back they ripped off four in a row, though three of those were in the dunk contest. But they’ve lost their last two, one of Minnesota and another in a game of HORSE to the Flames.

As Sean McIndoe said on Grantland today, the Jets are just kinda there. They win about as much as they lose. They score about as much as they get scored against. They’re not terrible but they’re not good, and essentially they make up the numbers in the division because they’re not going to the playoffs (at least likely aren’t) but they aren’t going to come anywhere near the #1 pick either.

The one fear tonight is that the Hawks have basically laced the Jets twice, and they won’t want that to become a trend. I’m not sure there’s much they can do about it but you know how these things go. Winnipeg does have some spice on its wings with Wheeler, Ladd, Frolik, Kane, Setoguchi and one or two others. But past Bryan Little there’s no center here to really get the puck around, and other than Enstrom and Bogosian there isn’t a blue-liner who is an expert at moving it either. They have one who might eat it, but not move it. It leads the Jets to looking like they’re just a disorganized mess as wingers shotgun up the ice while the defense struggles to get out of their zone and there are turnovers galore in the neutral zone.

A lot of the Jets play hinges on young’n Mark Scheifele, who can look like the high-end 1st round pick he was some nights and on others he looks like the bewildered rookie that he also is.When he has a strong game, the Jets look something like a team and are capable of destroying the Wings or eviscerating the Preds or beating the Sharks, three things they’ve done this month. But when he doesn’t they don’t have a lot of scoring and that defense creaks so easily and Pavelec just isn’t that good, which leads to losses to the Flames or getting walloped twice by the Hawks.

There’s no good reason the Hawks should struggle with this team, but they haven’t needed a good reason to lay an egg in Nashville or watch Brent Seabrook become an Ibsen play in Colorado. When the Hawks want to they can still turn up the volume and basically throttle anyone. But they’re not always going to want to. And they can always find a way to biff something they shouldn’t. Still, one should expect a response tonight.

Hope to see you out with us. 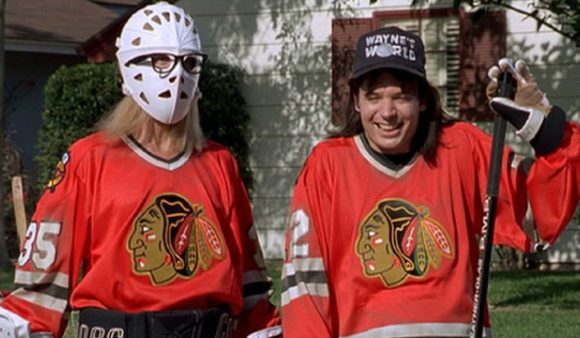