Island in the Sun: Kings 5, Blackhawks 2 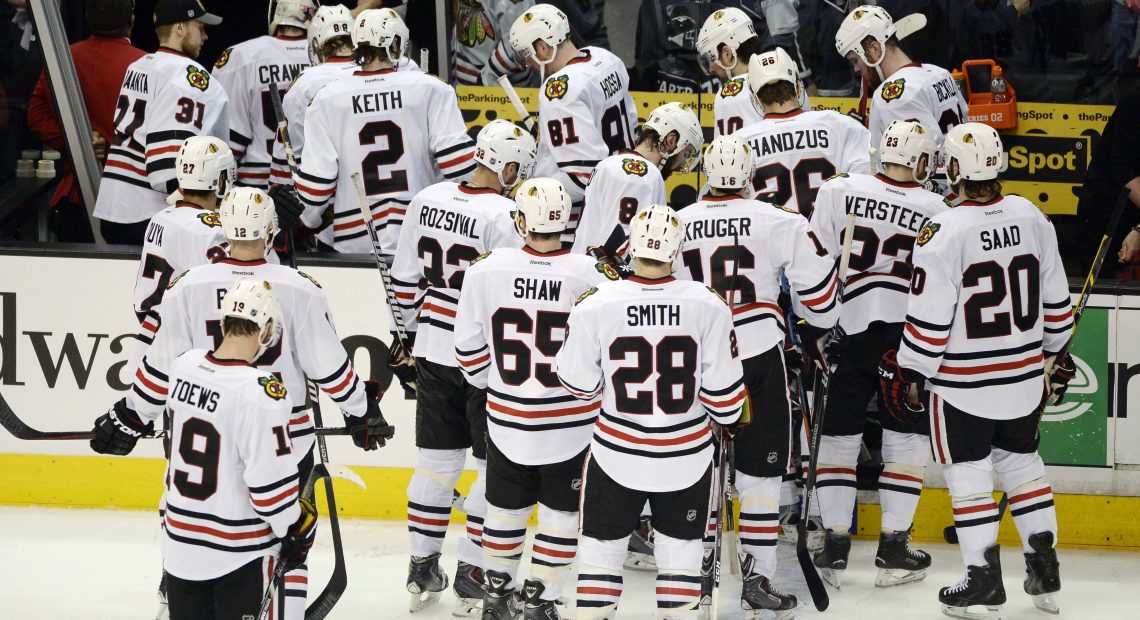 And so it’s come down to this. Not that we should have been blind-sided by any of this. Following the Game 2 aftermath, it was pretty evident to see that Los Angeles possessed a much more potent offense than their version from last year. It shouldn’t have taken a six goal output to discover that. Perhaps it did to the mouthbreathers that were openly cheering for the Kings to dispense of Anaheim in the previous round but certainly not to anyone who watched them play hockey for more than a few minutes.

Tonight was a bit of the same and it’s becoming pretty apparent that when the Kings are rolling, they are nearly unstoppable. Even though the Hawks came out with another strong start and had two power plays in the first seven minutes, they had nothing to show for it. Meanwhile, the Kings did not miss when the Hawks made the tiniest of mistakes.

During a 4-on-4, Patrick Sharp got stuck on the ice when the Kings penalty let out. This should not have been a dramatic mistake. After all, Sharp was one of the best Hawk penalty killers a couple years ago. But Sharp failed to rotate as Toews wiped out on his pursuit of the puck-carrier. This left Jake Muzzin with ample amounts of time and room to pick a corner on a screened Corey Crawford. Again, I would hardly qualify this as an egregious mistake on Sharp and/or Quenneville. It was very slight but it ended up costing the Hawks.

From there, things got ugly. Anze Kopitar took the puck right off Duncan Keith’s stick for the second goal. The Kings scored another power play goal off a pinball bounce that ended up right on Dustin Brown’s stick and even he couldn’t miss that open net. Then Drew Doughty surprisingly found a lane to get his point shot through as Kris Versteeg pontificated which clubs he could start guest DJ-ing next December.

All that said, the fancy stats and eye test will say that the Hawks are not that far off. They carried the play 5-on-5 for the majority of the game. Their lines (minus Handzus) seemed to generate a fair amount of quality scoring chances. And to Quenneville’s credit, he didn’t blow things out of the water (by his standards) as soon as the Hawks went down big.

The difference tonight was very simple – Jonathan Quick made key saves when he had to and the Kings power play right now is automatic.

–It’s been awhile since the Hawks have been outclassed in long stretches of a playoff series (Vancouver in ’11 was the last time) but the Kings are doing that to the Hawks. When the Kings are going good like they are right now, they’re the best team in the league. There’s really no debate about it. We can talk about the Hawks’ effort or how their game day roster isn’t truly maximized but it’s all noise if the Kings keep doing their thing.

But when they start to get wonky (i.e. power play isn’t clicking; not clogging enough shooting lanes, sitting back in a defensive shell, Quick isn’t Thor, etc) they look incredibly ordinary.

(I’M ALERTING YOU NOW. THE FOLLOWING PARAGRAPH IS ALL BASED ON A SILLY HUNCH AND REALLY ISN’T BACKED UP BY ANY RELEVANT DATA) All that being said, it feels like it’s been pretty “easy” for them to rack up three wins against the Hawks and despite how people feel right now, they’re not that much superior to the Hawks. In the Penguins/Rangers series, I had a similar feeling when the Penguins went up 3-1 on the Rangers. It just seemed like the team down in the series was too good to not have a serious response. Every bounce seemed to go Pittsburgh’s way and then all of a sudden, they didn’t.

Maybe I’ll still be waiting for a bounce to go the Hawks way as they’re shaking hands on Wednesday but I still think there’s a course correction coming. However brief it may be.

–So Michal Handzus only played 4:28 minutes tonight and didn’t skate a shift in the third. Why does it take facing elimination in a nearly must-win game for this to sink through? The Hawks aren’t winning face-offs and aren’t killing penalties. Amazing how his defensive zone value is of little use when this is happening. Truly groundbreaking.

It’s tiresome to keep talking about the same things over and over (Really, it is).

But when you see only one Kings line (Carter-Toffoli-Pearson) consistently torching the Hawks, they either need to find an answer to it or they need one of their two lines to start capitalizing on all their opportunities. It’s really that simple.

–If Kris Versteeg doesn’t break through the top 5 of contract buyouts on CapGeek in the coming weeks, then you have failed as Blackhawk fans.

–As for any other Game 5 adjustments, a stronger performance out of Corey Crawford would be welcome at any time. The Hawk lines seems to be rightly aligned for the remainder of this series, however long it may continue.

Sure, it would be nice to see another possession-driver like Jeremy Morin in the lineup but he’s not going to make an instant impact and he’s certainly not going to be trusted with more than 9 minutes of ice time at this juncture, combined with his lack of playing time.

The Hawks have to figure out how to close down LA’s shooting lanes on the power play because right now, it seems like every shot is getting through and the only way they’re not scoring is if they miss the net. Whether it means getting more aggressive on their point men or collapsing within the hashmarks, they have to try something different.

Cinch it up and hunker down.