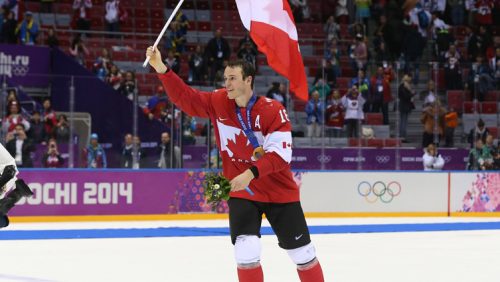 Of course, the forwards is where Canada separates itself, because Sweden probably has a better blue line. The lines they could conjure from this team are dizzying. Right now they have only the best player in the world playing between perhaps the two best possession forwards in Bergeron and Marchand flanking Crosby. Stamkos and Tavares aren’t even playing center, which means Ryan Getzlaf’s tendency to just float around the edges and pass actually will probably work just fine with those two snipers. Joe Thornton is going to be setting up one-timers for Claude Giroux. Oh, and Toews is centering for Seguin and Couture. So that’s 12 #1 centers on NHL teams just fucking around getting a triple-double there. And Seguin is basically only replacing Jamie Benn on Toews’s wing… boy that would have been nice to replicate in real, NHL life, huh? I kind of want to hear Toews’s inner monologue when he goes from Seguin and Couture to Panik and Schmaltz at training camp.

And in case something goes wrong, and I guess if you squint you could see where a really talented forward group could give this somewhat bass-ackwards (for Canada) blue line some issues (that forward group is most certainly not American), the best goalie in the world is backstopping it all. Assuming he’s healthy. And if he is, he’s rested. So that’s nice. And in case something goes wrong there, the reigning Vezina winner is behind him and behind that is a goalie with two rings and should have been a Vezina finalist last year (along with a Conn Smythe winner in 2013, but we’ve had that talk).

It should be nigh-on impossible to stop this team. It certainly isn’t going to come into the group, and the only question is whether they’re combined goal-difference after the three games will eclipse +15. If the US picked its most talented players, and didn’t have to sacrifice some of them to North America, they might have thrown a scare into them. But not now. It isn’t going to be the Czechs or Europe either.

Basically, the hope is that they win the group, and have to face North America in the semifinals in a game that assuredly would end 8-7. At the end of two periods. That’s clearly going to be the most entertaining game of the tournament.

Reasons For Not Optimism: Considering it’s fucking Canada, that blue line kind of underwhelms. Jake Muzzin? That’s what we’re doing here? With Jabe, Weber, Muzzin, OrangeJello, and even Vlasic a little it’s not actually all that mobile. On an international rink that might have been a bigger problem, though it wasn’t two years ago. Also the forwards will probably ensure they never have to defend anyway. Still, maybe North America or Sweden, given the speed they have, can make things interesting for a little while.

Or maybe when Quenneville kneecaps Tavares before a game so he can sneak Andrew Shaw out there in his gear in disguise.

Predicted Finish: They’re going to win it, and then Canadians will try and convince us they really cared the whole time and how we’re all so inferior, before we point out that their soccer team, in a sport the world actually does care about, couldn’t even make the Hexagonal again. But they tried so hard!