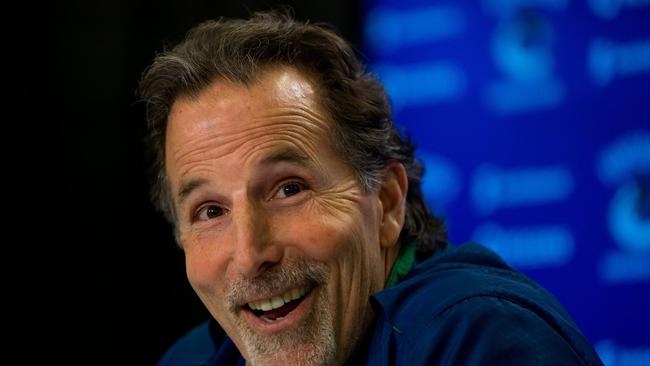 Secondly, I still find the Olympics a little silly. One, stopping the season for three weeks is simply not justifiable, especially when the tournament is in a far off place with weird start times (though if you use it to drink in Vegas with buddies of TheRoyalHalf, it’s not so bad). Secondly, the squads in those generally fly off to some far-flung location, get maybe one or two practices together before the games start. In the World Cup, these teams will be together for a couple weeks before the tournament starts, get some practice games in, and actually figure out what works for their team and what doesn’t. Whatever these teams are, they do get to figure out the best version of themselves on the World Cup timeline.

I’m a soccer fan, so obviously I love international competition. Every sport that can should have it. I even think there’s a way you could fit in a Baseball World Cup during a week long or 10-day All-Star break with a slightly shortened season if everyone really wanted to. The World Cup of Hockey had a chance. But the NHL biffed it, and the players are seeing right through it and thus pulling out after coming down with “FuckThisItis.” And soon I fear, so will the fans, who may have already.

The NHL filed this into “exhibition” category the minute they came up with this ridiculous Team North American and Team Europe. If we’re not having strict countries then we’re just having an All-Star tournament that might as well take place on some resort (and don’t give me “Toronto is lovely this time of year.”). It lost a shit-ton of credibility with that decision. Sure, having Slovakia or Denmark or Norway or whoever else get their brains beaten in three times isn’t too much better, but that’s how this works. And we’ve seen those teams jump and bite occasionally in the Olympics. If you’re having an international tournament, HAVE AN INTERNATIONAL TOURNAMENT. You’d think this would be easy to figure out, but this is the NHL after all

Secondly, killing a lot of the enthusiasm for a lot of us is the Team USA braintrust was fed nothing but paint chips and ethanol for a couple weeks before picking players and coach. This is a squad and coach the game left behind at least five years ago, and is almost certainly going to get totally embarrassed. Their only hope is one part Bishop/Schneider binge, except Torts probably won’t play either of them, and one part Kane/Pavelski scoring streak except they’re the only line any team is going to have to pay any attention to.

One problem for the Yanks is that there’s at least four forwards and two d-men who would certainly be on the roster if they didn’t have to play for North America, further cheapening this thing. Saad, Larkin, Gaudreau, and Eichel would be a fuck of a lot better than Abdelkader, Backes, Dubinsky, and Palmieri. Seth Jones and Jacob Trouba should have slotted ahead of both Johnsons and probably even Matt Niskanen. Throw those U-23 players in, and this would be a squad I’d be very excited to see. Instead we get one line that might be able to score, and three lines of misshapen toys and faulty demolition equipment.

Add to that a neanderthal coach in Tortorella, who seemingly has missed the memo on what it actually means to be American, and I think most of us can’t wait to see this thing crash and burn (CALLBACK!). There is no way the US is keeping up with Canada, Team Europe might even be a struggle, and whatever comes out of the other pool if they miracle their ass to the semis, by trying to block a lot of shots and be “heavy.” Backes, Kesler, Abdelkader, Erik and Jack Johnson, and probably even Ryan Suter are going to need oxygen tanks when this thing is over. Team USA wants to play a game that was decided long ago doesn’t get you anywhere, especially on this stage. Seriously, how many of these forwards should be replaced by Hillary Knight?

Reasons of Optimism: It’s a short tournament, and if Torts hasn’t completely lost his mind (he has) and plays either Bishop or Schneider, they’re both capable of getting scorching for five-six games. That’s about it.

Reasons for Not-Optimism (trying not to use “cynical” any more):The Yanks are short at least one puck-moving d-man behind Byfuglien and Carlson, and we know what the problems are with Buff anyway. They have maybe two lines here, and Brandon Dubinsky is probably going to be on one of them which is a problem. Their coach is an idiot. This team just isn’t all that fast. The middle of this squad is playing for another team. This almost certainly will get real ugly real fast, but maybe that’s how you get the changes you need made made.

Prediction: 2nd in their group, because Team Europe just isn’t as good as we all want it to be and has no goalie and the Czechs straight up suck. They then will get their doors blown off in the semis by Sweden or North America. I mean utterly destroyed. Like, there are going to be highlights of that game where the commentary gets replaced by Jim Ross. “STOP THE DAMN MATCH!”