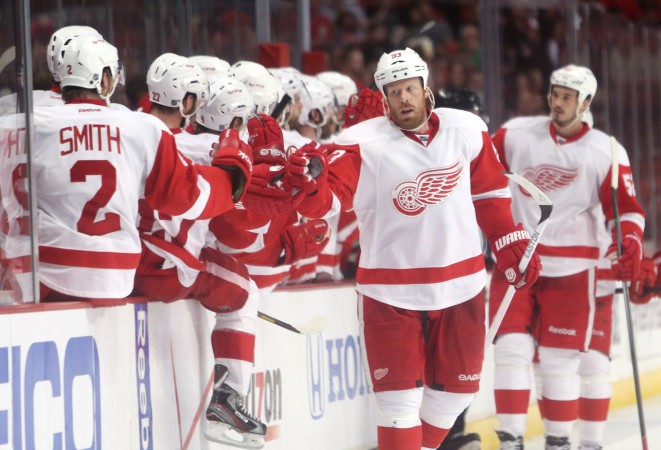 While it’s hardly cause for panic or tearing one’s hair out (if you’re unlike me and have any), Detroit was the far better team today. At times, it felt as if the Hawks felt as if it would be as easy as it was in Game 1 for the final 40 minutes. However, that completely discounts that they’re playing the DETROIT RED WINGS. While it’s something you can’t quantify, no matter the talent or speed deficit, the players on that team do come with a bathtub of pride and are not simply going to let anyone have their way.

Yeah, I know. That speaks to a “flatness.” But that’s a component today. The Hawks were just simply not working as hard as Detroit, who made it clear they knew they had to have this game (which they did). The Hawks didn’t match that. That’s not the whole reason they lost today, but it’s definitely part of it.

But there are certainly tangible and structural things we can point to. Detroit was much more focused on closing off the neutral zone than they were in Game 1. Not by getting more people on the blue line per se, but by being much more passionate in their backcheck. The Hawks couldn’t carry the puck through the land between the lines without someone right on their back eliminating decision time.

So they couldn’t carry the puck in as easily, but seemed reluctant to get the puck deep and get it back. They just didn’t get pressure on a Wings D that is always good for a few turnovers. And whatever battles they did engage in, they lost. Just have to be better there.

But there are some warts that the Hawks have gotten away with before that got at least a little exposed today.

-The first being that Brent Seabrook has been a turd all season. Sure, his indecision only cost them the 4th goal, and he led the team in hits if you’re into that. But quite simply, he can’t get there right now. Think the Wings and eventually the Kings or Sharks won’t key on that? You’re very wrong.

-Hjalmarsson had a howler. It might be his first one of the season. It happens.

-Once again, it gets exposed that Sharp, Kane, and Handzus can get so easily pinned in their own zone. And unless Sharp plays out of his skin, they don’t have much of a forecheck.

-On that end, even though he had the one goal Kane didn’t have a very good game. The past few games he just doesn’t seem to want to get engaged. Sharp has been taking on two defenders on the boards, and Kane routinely is standing outside of that waiting for Sharp to win that battle. At some point, it doesn’t matter what size you are. Get in there and come out with it.

-While we’re talking about this, Brandon Saad has struggled with the upped fastball in the playoffs. He certainly wouldn’t be the first rookie to do so. Remember, he’s had a full season, with half an AHL campaign under his belt. Maybe he’s hitting a wall? It really should only be one or two more games before a change should be considered. But what would be that change. You can’t move Bickell. Sharp and Saad swap?

-And on that line, once again we have a game where Jonathan Toews didn’t have an impact. The tweets and other coverage point to the physical nature of his handling by Henrik Zetterberg. But at some point, Toews is just going to have to break through. It’s seven games now. He’s been fine, maybe even good this playoff run. But don’t we count on a little more than that?

-In a game where the Hawks needed more straight-line play and forecheck, I think it’s delightful that one of their best forwards at executing same was eating popcorn in the pressbox to prove a point that’s already been proven so we could have a dumb penalty from Carcillo and nothing else.

-Wasn’t that one game respite from uncaring Dave Bolland nice on Wednesday? I wish it lasted longer than one game.

-I have to say, I criticize him more than anyone who doesn’t write for this blog, but I’ve been impressed by Quenneville’s tone for this whole spring. No blaming anyone else, no making excuses, just pointing the finger where it has to go. But soon, it’s his responsibility to make sure that finger can’t be pointed at all.

It’s just one. I expected this effort from the Wings at The Joe, a little surprised it came here. But I expect the Hawks to come out slobbering on Monday, and if they do the Wings still don’t have an answer. And the last time Scum beat the Hawks in 3 periods in Detroit was 2010. So that building will hold no fear for the Hawks.

It’s only one. Let’s all breathe.