I Was A Teenage Anarchist – Canucks vs Hawks Preview, Pregame Thread, Allocution

As the season and the homestand soldier on, tonight’s game will mark both the median point of 7 straight at home for the Hawks as well as an even third of the season as a whole. And tonight’s tilt against the Canucks features all of the usual build-up associated with games between these two teams, but with a little extra spice added in tonight for good measure.

The Canucks find themselves in a familiar place atop the mountain of dog vomit that is the Northwest Division, however their means of getting there haven’t been quite what they planned. While the lockout put the entire process on hold, GM Mike Gillis’ aim was to deal Roberto Luongo and his elephantine contract to anyone dumb enough to take it (read: Brian Burke/Dave Nonis, Dale Tallon) while renewing the far more affordable Corey Schneider, who was seemingly ready to take the reins of the starter’s position.

But even the best laid plans can go dick in the dirt, starting with Schneider’s 5-0 borking at the hands of the Ducks opening night. Since then, ol’ Borat has pretty much saved their ass, going 4-0-3 in seven starts with a 1.63 GAA and a .934 save percentage, with one of those victories being a shootout win over the Hawks earlier this month. But it will be the ginger who gets the go tonight, whose last appearance was against the Stars on Friday night wherein he backstopped the Canucks blowing a 3 goal lead to lose in regulation. Long-time observers will also take note that this will be Schneider’s first appearance on United Center ice since Michael Frolik deked Schneider’s crotch into exploding.

In front of all of that crease drama, the Canucks finally see themselves getting healthy at forward after staying afloat during the absences of Ryan Kesler, who returned on Friday, and P.E.T.A. activist David Booth, who returns tonight, likely on Kesler’s wing. However, Manny Malholtra is unavailable for the Canucks, and more than likely permanently with repercussions of his devastating eye injury still affecting his play. While at face value losing a fourth line center shouldn’t mean that much, it does to the Canucks, as Malholtra took the majority of defensive zone faceoffs, which allowed the twins to take an inordinate amount of offensive zone draws. That number will come back to earth over a large enough sample size, and something to watch for will be if doing so will affect their usual creepy ways and point per game pace.

The Canucks’ blue line also looks the same as it always has, even with the addition of Jason Garrison. Plenty of offensive talent, but with a tendency to be a clown car in their own end under sustained pressure. Kevin Bieksa will be yappy, Alex Edler will leave his feet with his elbows up to hit someone, and as always, Dan Hamhuis has got this.

As for our Men of Four Feathers, the injury bug has bitten once again, this time in the form of Brent Seabrook, whose bag apparently still needs some icing after absorbing a Mike Richards shot on Sunday. Michal Rozsival figures to jump in his place alongside Duncan Keith, which makes sense given Rozy’s right handed shot, and also to avoid having to disturb more than one pair. Although this is Quenneville after all, so don’t be surprised if the Keith-Leddy fever dream gets tossed out there at some point at even strength. It stands to reason that Hjalmarsson and Oduya would stay together given their level of play regardless, and also draw the assignment of the Twins. This will all take place in front of Ray Emery once again, with Corey Crawford skating but not quite ready. Stick in lanes and rebound clearances will be absolutely critical in keeping the Canucks from exploiting Razor’s lack of lateral mobility.

Though Q hasn’t gotten matchy-uppy yet this season with his forward lines, tonight might be an exception with his starting goalie and #2 defenseman out against a top opponent. Though Dave Bolland has drawn the Sedins in the past, doing so with his current linemates would be a waste of Kane and Sharp’s primary uses. And for a team that possesses the puck as well as the Canucks do, especially that line, Bolland’s inability to win a draw could end up being costly. Look for Toews to see a lot of the twins, and for Marcus Kruger and Michael Frolik, to get a lot of Kesler and Booth.

Smart zone entrances and exits are going to be crucial tonight. When the Hawks have the puck they need to keep it, because the longer they do the greater the chance of a mistake by a Vancouver defenseman becomes. This also means making Corey Schnieder play the puck outside of his net as much as possible, as he’s shown some difficulty with that in the past. And there’s bound to be one monumentally stupid penalty from the Canucks, so capitalizing on that, or any power play chance could be the difference in the game.

Regardless of any streak that might be on the line tonight, there’s a loud quacking sound that’s rapidly closing in on the Hawks from behind in the western conference standings, and they can ill-afford to give any ground. This will also be the Hawks’ first attempt at repaying a squad that’s already handed them a defeat, albeit shootout in nature. Here’s hoping they don’t lose sight of either of those two facts. Let’s go Hawks. 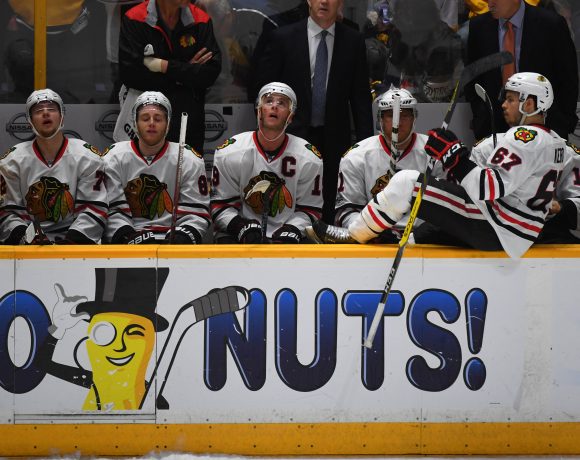