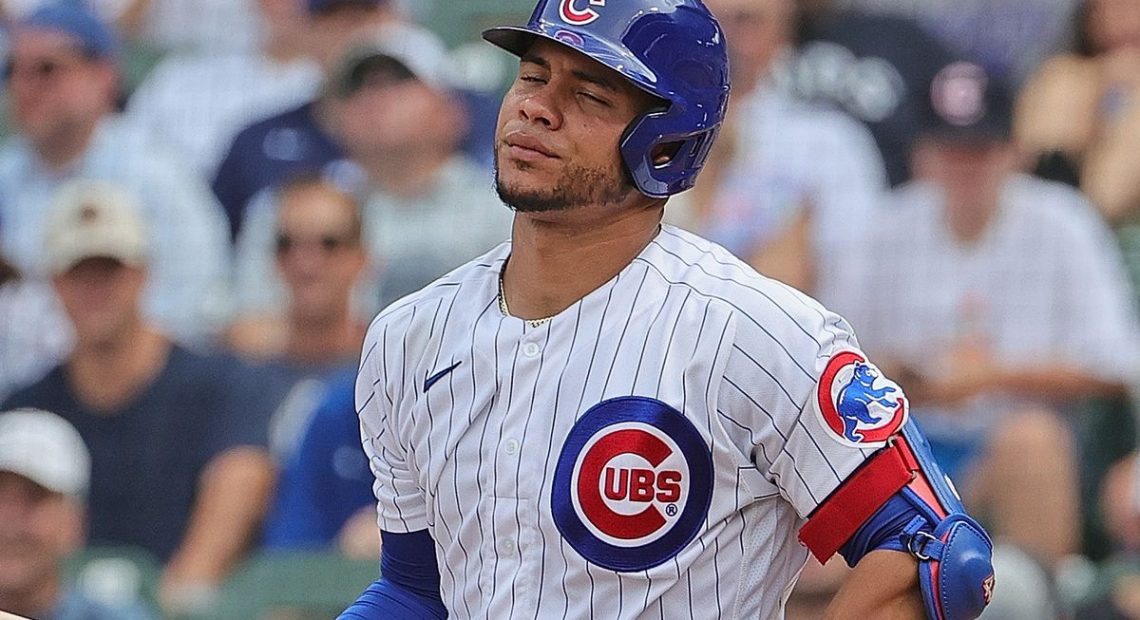 Well, that went just about as expected, with the newly-rebuilding Cubs being unable to get a win against the contending Sox. The first game was at least a close call, outside of dragging on far too long. The other two games, however, were pretty horrific to watch, as the Sox pretty much decided both games in the first couple of innings of each. The Cubs also gave up four homers that scored six runners in last night’s game, and two more solo homers in Saturday’s game. If anything, it shows that the Cubs have quite a long way to go to become the contending team they once were.

Kyle Hendricks started this game because any other Cubs pitcher would have made an absolute fool out of themselves (see below). With Hendricks, the Cubs at least stood a chance in the season opener.

Greg Deichmann made his major league debut with the club in right field, the first prospect the Cubs received for developed players this deadline to debut. I guess he was a home run guy in the minors; he replaces Jason Heyward in right field, who is now on the IL with an index finger issue. He had one hit in the 4th inning and that was about it, but we’ll see how he develops over the coming weeks.

It was a pitchers’ duel up until the 4th inning, where Hendricks gave up two hits with no outs, as Adam Engel stole third base. He ended up scoring and the Cubs soon put themselves in a bases-loaded situation as the Sox easily started finding holes in our defense to hit balls through.

Lance Lynn gave up a pair of walks in the 5th, getting frustrated on some admittedly sketchy ump calls. With Matt Duffy up to bat and two outs, he ended up striking out to keep the Cubs off the board.

Eloy Jiminez then led off the 6th with a double. Deichmann was able to catch a fly ball in right, but the sacrifice put Jiminez on third base. Despite giving up another walk after that, it was a pretty impressive tag out by Robinson Chirinos to keep the game 2-2. Cesar Hernandez was intentionally walked to keep the bases load, but Hendricks came in clutch when it mattered, getting a strikeout to end the inning.

Once Hendricks came out of the game, things once again started out shaky with Jake Jewell on the mound in the 7th, as a hard-hit ball to left field gave Engel a double. He made it out of the inning unscathed, however, with a groundout and a strikeout.

The Cubs then put two more runners on board in the 7th when Michael Kopech gave up a walk and a sac fly. David Bote sac flied again for Andrew Romine to make it 2-1 Sox. Trevor Megill in the 8th gave up a tough single that Frank Schwindel on first base couldn’t make the diving play on, and soon Cesar Hernandez hit a two-run homer, which seemingly all but closed out this game for the Sox.

Until Craig Kimbrel, of course. He wasn’t even the closer because the Sox have arguably the two best closers in the game, and we all know what his stuff looks like — maybe too much, to Kimbrel’s detriment, as Duffy and Schwindel got base hits off of him, and then Romine hit a two-run homer to tie it! Very unfortunate to see statistically the worst outing Kimbrel has had in like ten years, but hey, our allegiances are elsewhere now. To add more salt in the wound, Chirinos singled right after this to get him pulled after getting only two outs.

The thing about the Sox is that their replacement, Liam Hendriks, is the other best closer in the league, and got the third out quickly. So the Cubs retaliated with ex-Sox reliever Codi Heuer to pitch the 9th inning, and he had some pretty good stuff – the Cubs completed a double play to keep it tied at the bottom of the 9th thanks in part to Willson Contreras, who had an off-day today but eventually suited up as catcher near the end of the game.

Matt Duffy put the winning run on first, then second with a steal, in the 9th inning with two outs, in which Ian Happ promptly and predictably struck out as he is wont to do, forcing the Cubs into extra innings.

Manny Rodriguez allowed a two-run homer in the 10th for the Sox, and by that time it had all unraveled for the Cubs and the fun was over. One more runner scored to end Manny’s day. In his place came Michael Rucker, with a sparkling 12 ERA in 2 games played, which he was able to knock back down to 9.64 despite allowing another run scored. And despite another two-run homer by Schwindel in the bottom of the 10th, the game finally ended after 3.5 hours.

The other two games were nothing short of a disaster for the Cubs, to the point where they don’t even deserve individual game wraps because who wants to relive that dreck? They got outscored 13-3, including 9-2 in the first two innings of those games. Most notably, Zach Davies, who sucks in case you didn’t know, gave up seven runs in the first two innings of last night’s game to give the Cubs no chance in the game at all. Had he not given up seven runs it wouldn’t have been a blowout, especially considering our bullpen wasn’t horrific even though they had to start eating innings starting in the 3rd.

Adbert Alzolay, at least, was okay; despite giving up six hits and two runs in his 6.2 innings pitched on Saturday, he also struck out seven batters. The Sox are 16th in the league when it comes to strikeouts, so being able to strike out seven guys against a really good team is a step in the right direction on his part. Had the Cubs made any attempt at trying on offense, it would’ve been a quality start for Alzolay, people — he is likely the future of our pitching rotation.

David Bote had two hits in Saturday’s 4-0 loss, accounting for exactly 40% of the offense for the Cubs that day. Rafael Ortega was the only multi-hit Cub for last night’s game, despite scoring no runs. Instead, it was pinch-hitter Frank Schwindel last night who batted in two of the three Cubs runs to score Patrick Wisdom and Sergio Alcantara. Schwindel, at least, is growing on me. He will likely be the regular starting first baseman going forward. More please, why not?

Jake Jewell continues to develop as well. After getting out of the jam in Friday’s game, he pitched two innings yesterday and was the only pitcher who didn’t allow a hit; he gave up only one walk and had two strikeouts. He is definitely a reliever to watch over the coming weeks as the season begins its downhill stretch.

I’ll be out of state for the next week or so, while the Cubs likely get decimated during a four-game series against the first-place Brewers this week. They then have a three-game weekend series against another bottomfeeding team, the Miami Marlins, after that to recuperate. Enjoy the baseball, and I’ll be back at it with more wraps again soon. Go Cubs go.