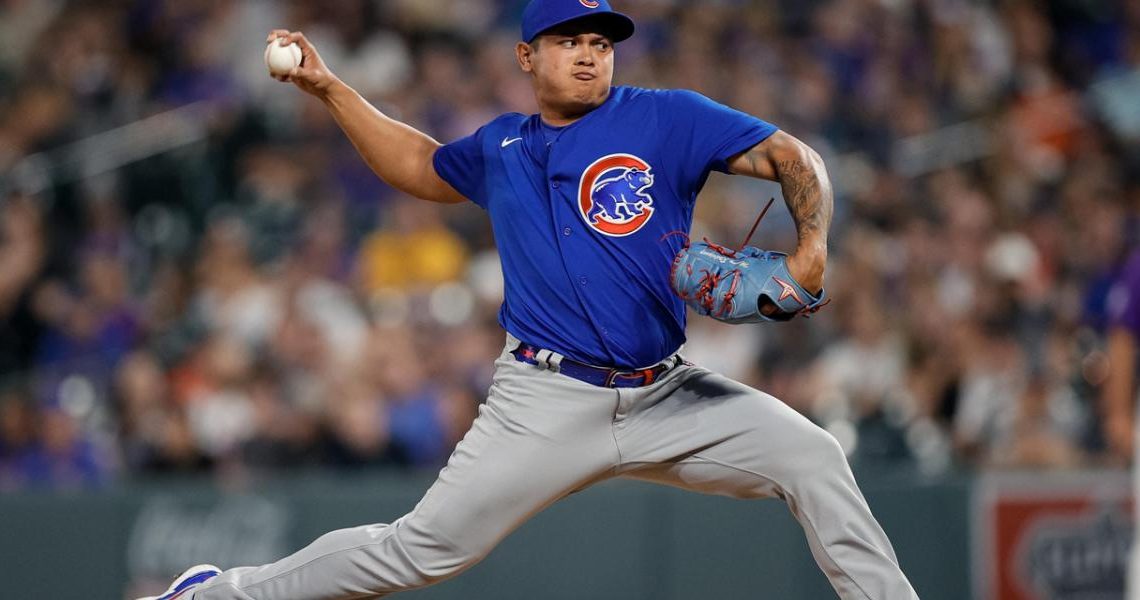 13.5 games back, playoff hopes decimated, and now losing two out of three to the Rockies, a team with a technically-worse record than us. This next month or two of Cubs baseball is going to suck, but let’s try to find the silver lining where we can.

The silverest of all the lining is Patrick Wisdom, who was the OPS leader for the Cubs in today’s game at a .907, despite having no hits. However, he had three in yesterday’s win and another in Tuesday’s loss. His hits are regularly the most interesting part of these games as he becomes the new star of this below average team.

Ian Happ, who struggled with the bat all season, is finally making a bit of contact, or at least putting himself on the god damned bases. Rafael Ortega continues his stint in the leadoff spot with hits in seven straight games. Even David Bote is sorta kinda showing a little bit of offensive promise since his return from injury, although if he could stop striking out so much that would be mighty cool.

The starters are still incredibly unreliable, and the bullpen is a bit unpredictable most of the time, as what feels like an endless stream of guys from the minors are being called up for their shot in the big leagues. It will still take some time to see what exactly we have here, especially since most of our players we traded for are currently injured or not yet big league ready. We shall see.

The game started out on just the foot the Cubs needed, as David Ross very quickly gets himself ejected from the game in the 2nd inning for arguing balls and strikes. Granted, the umpire was making some garbage calls, calling strikes on balls at players’ shins. But whatever.

Despite getting on the board in the 2nd inning shortly after that thanks to a couple of sacrifice plays by Wisdom and Jason Heyward, things very quickly unraveled for starter Zach Davies at the bottom of the 2nd. Why, oh why, does he stay on this team? Trevor Story, who for all intents and purposes shouldn’t even be on the Rockies and yet still is, doubled to start the inning. A single and a walk later and the bases were loaded for the Rockies, just in time for Elias Diaz to hit a grand slam home run to make it 4-1 Rockies. The three outs were made shortly after that, but it was far too late for this club.

Happ hit a solo homer in the 4th as he starts, dare I say it, a little bit of an offensive hot streak? It once again didn’t matter too much, though, as the Rockies hit a three-run homer in the bottom of that inning thanks to Zach Davies once again allowing a double and single to put two runners on base.

We had some DUDES coming out of the bullpen, including Michael Rucker in his second career Cubs game. Rucker pitched 1.2 innings and allowed four hits and four runs for a lovely 12.27 ERA, but Davies had already lost the game at this point so nothing mattered. Trevor Megill made another appearance, and he actually had a solid outing for once, allowing no hits and striking out two in his 1.1 innings pitched, lowering his ERA down to a quaint 13.50. Rex Brothers, in usual fashion, allowed two more runs to end the game.

I guess I should mention the four runs in the last two innings, despite nothing mattering. Rafael Ortega singled, stole second, and Willson Contreras doubled to score him in. David Bote then doubled to score Contreras, but Wisdom struck out to end the inning. Two more runs were scored in the 9th, as Happ walked and scored on a Heyward double, and Heyward scored on a balk.

In other news, Wisdom was moved back to third base this game to make room for Frank Schwindel, also in his second career Cubs game. Schwindel’s only hit of the game was a double in the 1st, but it directly led to the first Cubs run, so it’s okay. At third, Wisdom was…certainly not Kris Bryant by any means, as a hard-hit ground ball in the 6th inning went right past him despite his best efforts trying to dive for the ball.

Amazingly, the Cubs had a come from behind win in what was mostly a sleeper game except for the two total innings where any runs were scored. Led by Alec Mills, who gave up two runs for the Rockies in the 1st inning and then not again, the Cubs’ pitching actually looked, dare I say it, kind of good? Mills DID give up four hits in the 1st, but he gave up only four more over the next five innings in which he pitched, which I guess is progress. (The bar is very low around these parts.)

Both teams generated some hits throughout this game, though they were mostly singles and the occasional double that didn’t amount to anything. The Cubs got struck out the side in the 3rd inning on fifteen pitches, which is certainly not a good thing to be doing. But it was the 5th inning where the Cubs were ready to generate just enough offense to take over the game, with Rafael Ortega, Willson Contreras, and Ian Happ at the head — the new normal for this team.

Happ has been getting on base lately through walks, but it seems like whatever he’s doing is working for the Cubs, because he’s certainly been scoring lately. Today was no different; he walked to load the bases as Patrick Wisdom was able to step up to the plate to hit a double that scored all three runners thanks to some good hustling by all involved. It would give the Cubs the 3-2 lead that would stick for the rest of the game.

Our bullpen that consisted of Adam Morgan, Codi Heuer and Manuel Rodriguez, our new closer I guess, gave up only two hits and had two strikeouts and no walks. Rodriguez garnered up his first career save — a genuine congratulations to him. It was enough to win just one over the Rockies.

Well, the Cubs tried mighty hard to stay in this one, but five runs isn’t enough these days when you have poor ol’ Jake Arrieta on the mound. The Rockies scored once an inning for four straight innings, which included three solo homers given up by Arrieta. The 3rd inning was just three singles that ended up scoring a runner, so again, it was not great here on the pitching front.

However, despite the Cubs being struck out the side again this game and the runs against them piling up and up, a somewhat miraculous 4-run rally in the 5th inning kept them ahead for just a few minutes. It was thanks to a few new guys in Johneshwy Fargas and Andrew Romine who started the singling off, with Ortega and Contreras batting everyone in to the take the lead.

Despite this, Jake Jewell replaced Arrieta for the bottom of this inning and ended up giving up a two-run homer only two batters in that would give the Rockies a lead they wouldn’t surrender. It was only Jewell’s 23rd major league appearance, and at this point nothing matters, so all you can do is shrug and say, “It happens.”

The Cubs scored one more inning in the 6th but it was futile, though it was good to see Bote double and Schwindel bat him in on a single. Since the short-lived attempt of having Wisdom play first base right after Rizzo was traded, Schwindel seems to be The Guy over there. Before this game, Schwindel has had only two hits in his nine plate appearances so far this season, but today he had two hits and an RBI. He’s one to watch, if only because there’s not much else to see.

The Cubs are now slated to very likely get demolished by their cross-town rivals this weekend (sorry, but it’s true). The dichotomy between these two teams can’t get much bigger, as the Sox are legitimate World Series contenders, and we are continuing a freefall down the standings the likes we haven’t seen in a long time. It likely won’t be pretty this weekend, but hey, it’s what happens. At least we’ll get to see old friends Ryan Tepera and Craig Kimbrel back in town, and although time heals all wounds, it’s probably still a bit too soon. I’ll be back after this weekend to cover it all. Go Cubs go.