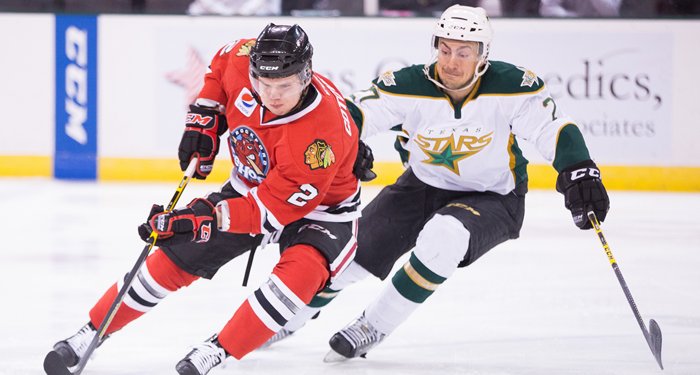 The Rockford IceHogs got their quest for the 2015 Calder Cup off to a bang-beat, bell-ringing start down in Texas over the weekend. The Hogs took the first two games of their AHL Western Conference Quarterfinal from the Stars in games on Friday and Saturday.

As a result, I’ll be heading to the BMO Harris Bank Center Wednesday night to watch the IceHogs try and wrap up the best-of-five series. Now…who’s coming with me?

Well…maybe not as many as management would like. I’m sure the Rockford brass isn’t completely happy with the league schedule makers.

Texas, who averaged just over 5,000 fans this season in their building in Cedar Park, drew 4,375 Friday and 4,978 Saturday. The IceHogs, who set an attendance record this season by packing an average of 4,834 into the BMO and have “home ice” in the series, get to host a weeknight game. The challenge for the Rockford area is clear; can they fill the house without dollar hot dogs?

Rockford, as most places in the AHL, like weekend games because of the obvious drawing power. The IceHogs averaged 5,208 in 28 weekend games compared to 3,492 in the eight Tuesday and Wednesday tilts. (In case you question my math, the two remaining home games were daytime contests for school-aged audiences.)

Most of these mid-week games had attendance totals in the 2,500-3,000 range. Rockford had over 5,000 on December 30 when they handed out youth jerseys. They had an announced crowd of 5,545 on April 15 but they were giving away tickets that night for free to go with dollar hot dogs, soda and beer (perhaps I should have mentioned the beer first).

Season ticket sales inflate the official gate from the size of the actual BMO audience, of course. The point of all this rambling is that Rockford would have no problem putting a full house of screaming Hogs fans in the building on a Friday or Saturday. What stirs my curiosity is whether or not Rockford can jam 6,000-plus into the BMO in what figures to be huge playoff game without being looped on dollar beer or full of dollar hot dogs (and I don’t profess to judge; I’ve had a couple of seven or eight hot dog evenings myself).

Hopefully the team gets at least a couple of weekend match-ups before the end of their playoff run. I just hope they don’t come against the Stars; it would be great if Rockford closes them out in front of Wednesday’s crowd, size be damned.

How The Hogs Got It Done Down Texas Way

Rockford handled the pressure of playing a veteran team who also happens to be the defending league champs. They also bested the Texas special teams over the weekend. Here’s how things shook out in the Lone Star State:

The IceHogs captured Game 1 of their Western Conference quarterfinal with the Stars. The Texas power play was the best in the conference in the regular season. However, it was Rockford that swayed the outcome on special teams as the Hogs rallied after the Stars took a third period advantage.

The Stars Curtis McKenzie was given a timeout for tripping at 6:06 of the opening period and the Rockford power play was quick to capitalize. Spencer Abbott took a pass from Ryan Hartman in the slot and had time to settle the puck before zipping the biscuit past Stars goalie Jussi Rynnas. The Hogs led 1-0 at the 6:23 mark.

The first two periods saw a pattern emerge; Rockford controlled the early going while the Stars exerted control in the latter stages. Texas peppered Michael Leighton with rubber in the last half of the first period and then evened the game in the 17th minute of the second.

The goal came off of the stick of McKenzie, who was involved in a battle with Stephen Johns in front of Leighton. McKenzie knocked Johns off balance and the rookie defenseman lost his cue. The Stars forward collected a rebound of a Greg Rallo shot and flipped it over the leg of Johns to tie the game at a goal apiece 16:37 into the middle frame.

The Texas power play garnered the lead early in the final period after Alex Broadhurst was called for slashing. Julian Honka fired a slap shot that got by Leighton. 4:24 into the third, the IceHogs trailed 2-1.

Rockford began its rally on the power play. Johns saved a potential insurance goal, keeping the puck away from an all alone Texas skater with a diving play. Stars captain Maxime Fortunus wound up in the box a few seconds later to set up 50 seconds of 5-on-3. Abbott, lurking at the bottom of the left circle, sent a pass from Ville Pokka into the back of the net just before the two man advantage expired 8:31 into the third.

Nearly four minutes later, Phillip Danault took a pass from Pierre-Cedric Labrie at the bottom of the right circle and swept around the Stars net. His backhand pass found Kirill Gotovets at the left dot for a one-timer that evaded Rynnas and put Rockford up 3-2 at the 12:19 mark.

The Stars put on a strong push to draw even but Leighton was up to the task. Rynnas was pulled with 1:15 remaining but shortly after that, Viktor Svedberg and Phillip Danault forced a puck away from Jamie Oleksiak on the right half boards. Danault got the puck past Travis Morin and into neutral ice, where Ryan Hartman chased it down. Hartman flipped a backhander down into the open barn door to seal the Rockford victory.

Abbott’s two-goal night earned him first star honors. Leighton wasn’t a top three star but did stop 33 of 35 shots to pick up the win. Gotovets, another rookie defenseman now in the playoff mix, led all skaters with seven shots on goal, including his game-winner.

Mark McNeill left the game in the second period after blocking a shot by Oleksiak. He didn’t return to action Friday.

The IceHogs came up with another strong effort to sweep of the Stars in the opening weekend of Calder Cup Playoff action. Rockford got a pair of goals to take control of the game on the scoreboard in the first period.

Greg Rallo had just come out of the box after being sent there for boarding Alex Broadhurst. Brandon Mashinter was bringing the puck into the Stars zone along the right half boards as Rallo got back into action. Mashinter backhanded a centering attempt that Texas goalie Jack Campbell stopped but the rebound lingered seductively in front of the crease. Garret Ross chopped at the loose puck and managed to get it under Campbell and across the goal line. The Hogs owned a 1-0 advantage 9:28 into the contest.

The final minutes of the first provided the setting for a key sequence in the game. Spencer Abbott was attempting to get a breakout started on the Rockford zone when his pass attempt to Peter Regin failed to connect. The puck wound up in the slot and Texas forward Brett Ritchie pounced on it. Ritchie got to the turnover and fired a shot pass Michael Leighton but drew iron instead of twine. Abbott was then able to finally clear the zone.

The Stars got set up again but Stephen Johns got control of the puck behind the Rockford goal line, backhanding the clearing attempt into neutral ice. Mashinter caught up with the disk and bought it across the Texas blue line. Jamie Oleksiak approached with the check but Mashinter passed to Tanner Kero, who got off a wrist shot from the top of the left circle. Campbell’s leg pads were victimized again and the IceHogs had another score at the 18:01 mark.

The Hogs took that 2-0 lead into the first intermission and held it until the midway point of the third period. Curtis McKenzie got a shot onto Leighton’s pads and Ritchie jammed the rebound far enough under the goalie’s right leg to get it across the line. The desperate Stars had some life and Rockford’s lead was cut in half 11:58 into the third.

With 3:54 remaining in the game, Derek Meech whistled for a high stick on Abbott to provide a late power play opportunity. The Hogs lost the resulting draw but Abbott was able to hold in Rallo’s clearing attempt. He was able to slide the biscuit along the blue line to Johns, who sent a cross-ice pass to Regin near the left post. The one-timer beat Campbell for a 3-1 Rockford lead with 9:43 left.

Mashinter added an empty-netter with 1:50 to go to establish the final score and the IceHogs took full command of the series. Leighton, who stopped 34 of 35 Texas shots, was awarded the third star of the game. Ritchie (second) and Kero (first) were the other stars as voted by the Texas press box.

The action is set for a 7:00 p.m. puck drip at the BMO Wednesday night. If need be, the IceHogs will play Game 4 Friday night and Game 5 on Saturday.