High On The Hog: Touring The Farm 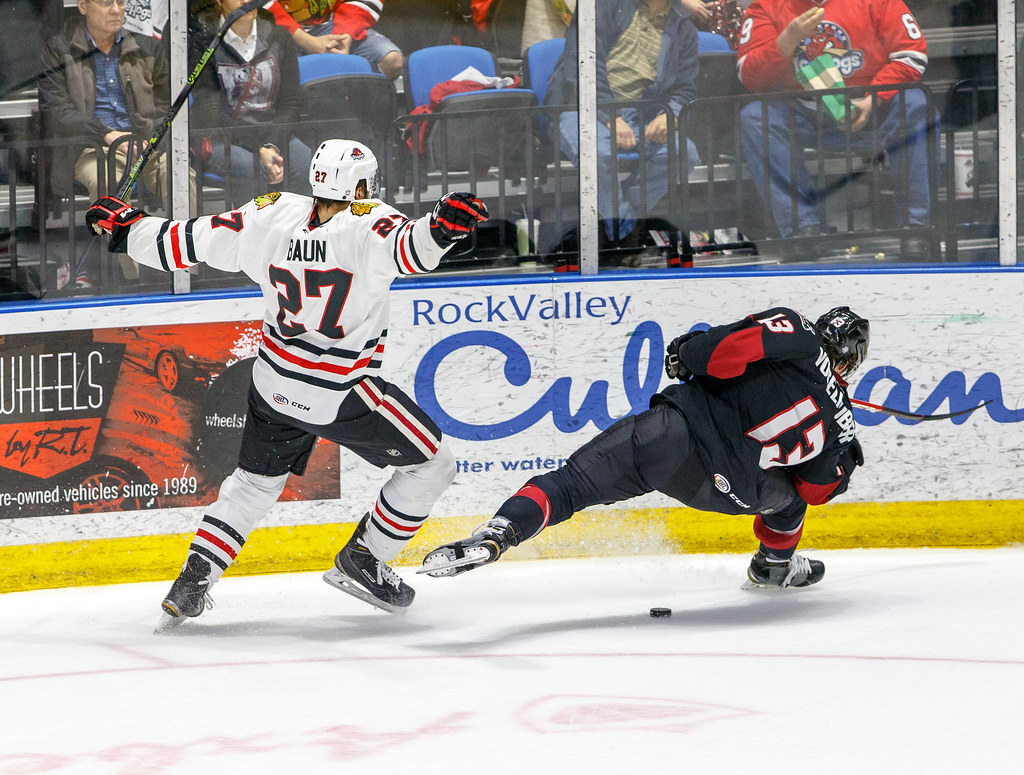 The Rockford IceHogs, Chicago’s affiliate in the American Hockey League, had their share of turnover this summer. Some familiar names depart for other opportunities, to be replaced by the hope of fresh prospects.

I will be sending weekly reports from the jewel of Winnebago County throughout the hockey season. Before the Hogs drop the puck on their regular season, I’ll be back with a more finite look at the roster once everything shakes out at Blackhawks training camp.

For now, though, I thought I’d get my mind back on hockey by taking a look at some of this summer’s activity and how the little piggies could look when things start to get serious here in a few weeks.

Jump on the tractor and let’s tour the old homestead, shall we?

Hey, it happens. Guys get better offers and opt for more dough or a fresh start or a new league or country or whatever. Let’s do this band-aid style so no one gets hurt…

With no interest from Chicago to return and anchor the crease for the IceHogs, Michael Leighton waited around until last Wednesday to sign with the Hurricanes.

Bryan Bickell was traded to those same Hurricanes. Kyle Cumiskey went back to Sweden. Kirill Gotovets signed with Dinamo Minsk of the KHL. Drew MacIntyre is in Germany. Just this past Friday, Matt Fraser signed to play in the SHL.

Mike Liambas signed with Nashville, which means we’ll see him in an Ads sweater more often than not. Garret Ross put his name on a contract and now skates for the Coyotes.

Dane Walters is going to be skating in training camp for the Grand Rapids Griffins, though I believe he’s merely on a tryout deal.

Rockford made several signings over the last few months; those players new to the organization will be in italics as I run down the players who may just be donning Hammy on their chests come October.

These are the players most likely to secure one of the three or four roster spots that could become available during training camp. Take your pick as to who you believe to be the favorites; I don’t see any locks with the possible exception of Schmaltz.

Hinostroza is a player I think we should keep an eye on this season. He didn’t find cord until the middle of December last season and still posted 18 goals for Rockford. More importantly, he picked up confidence and grew bolder by the day over the course of his rookie campaign.

Is Hinostroza another Martin St. Pierre, a little guy who lights it up in the AHL but can’t find that scoring touch at the game’s top level? It’s pretty early in his career to make such a forecast. It should be worth watching to see how he builds off a solid debut with the Hogs.

Like most of the players on the above list, I would expect at least a trip or two to the big city for Hinostroza. I think Hartman has an inside track on a more permanent spot as he can potentially fill a lower-line need. Going into training camp, though, I’d say it’s going to depend on what Q wants in his spice rack.

Mashinter is on a one-way deal and the Hawks may just be stuck with him on the roster. Too bad for the Hogs, as Mash is a productive player in the AHL. If the big forward passed through waivers at the end of training camp and scored 15-20 goals for Rockford, that would be fine with me.

Johnson left North Dakota to ink his entry deal with the Blackhawks. Lundberg is coming in from the Swedish Hockey League. The rest of this group have at least one season of AHL play under his belt.

Carrick spent most of his first four seasons as a pro with the Toronto Marlies. Abbott has time in Toronto and Rockford and returns to the IceHogs after a year in the SHL. These are two players who figure heavily into Rockford’s fortunes.

I suspected that Labrie was looking for a two-way NHL contract after playing on AHL ink last season. To the delight of the IceHogs fanbase, he got that deal from Chicago. Labrie knows his way around a rink, provides experienced leadership and has made himself part of the Rockford community.

I was not overly excited with what little we got to see of the kid last season. In fairness, he spent a lot of time hurt. However, I will point this out to all those who dismiss Hinostroza’s 18, Kero’s 20, and McNeill’s team-high 25 goals when forcasting NHL scoring potential.

Baun did not score in his first 23 AHL games last season. He de-bageled himself March 6, then went on a tear where he scored zero goals in his last 19 contests. To me, Baun has a lot to prove this season. Let’s hope he’s healthy all year and can do just that.

I can’t envision a scenario where a healthy Dowell is not the captain of the IceHogs. I think DeSousa is likely to merit a spot on the fourth line for much of the season. Langois put up 34 points (12 G, 22 A) in San Jose with the Barracuda and could see lots of time in Rockford. From there, it depends on how many prospects stick in Chicago.

Barnes, 26, is a big ECHL scorer who has had little opportunity in the AHL. Mosey is a local product (Downers Grove) who played in England the last two seasons. Chyzyk is fresh out of North Dakota, where he scored a dozen goals in his senior season.

I will operate under the assumption that Gustav Forsling will be remaining in Europe come fall.

If the Blackhawks elect to have an eighth defensemen on the roster, I would expect Svedberg or Gustafsson to be that guy. Otherwise, to see most of these players jostling for playing time.

Pokka, Schilling, Gustafsson and Svedberg (provided they’re in town) will likely comprise the top four. From there, Dahlstrom, Norell and Valleau will compete for the remaining spots.

Is it too early to proclaim Fournier, a second-round pick in 2012, a bust? As he enters the third and final year of his entry contract, Fournier has just 23 AHL games to his name. He played just twice for Rockford in 2015-16 before landing in Indianapolis, where injuries limited Fournier to only seven games.

Giving Fournier the benefit of the doubt in terms of being healthy to begin play this season. However, he still has an uphill battle to claim what has been an elusive home in the Hogs lineup.

I think Carlsson provides solid all-around defense and should be a regular in the lineup. Mattson is likely going to battle Valleau for playing time. His hold in Rockford is tenuous unless an injury or trade alters the landscape.

A lot is going to depend on whether this group remains as is through training camp. The way things stand in my mind, Fournier and Mattson will start the season in Indy.

This is pretty cut and dried and has been for awhile. Mac Carruth and Lars Johansson will tandem in Rockford. Michigan State grad Jake Hildebrand, signed by the Hogs, will play in Indy along with Wheeling, Illinois native Eric Levine, who was inked to an AHL deal August 4.

How even will that tandem be? Carruth was awfully good down the stretch but Johansson was signed by Chicago as a potential NHL backup in the near future.

To jump on the Hogs bandwagon, follow me @JonFromi on twitter. There, I will toss out whatever Rockford-related notions that cross my mind this season.