High On The Hog: Tight Race In The Midwest Division 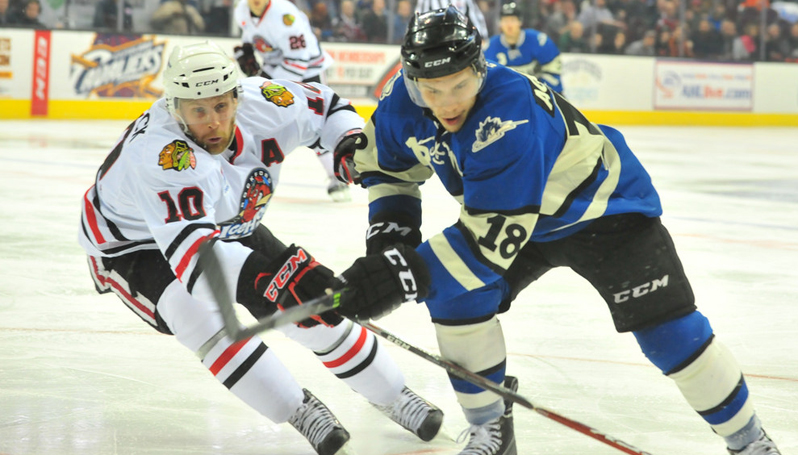 The Rockford IceHogs are locked in a tight battle for the American Hockey League’s Midwest Division. Currently, the IceHogs are even with the Milwaukee Admirals and the Grand Rapids Griffins with 66 points.

As is to be expected, Rockford’s group of prospects has been prone to streaks in the last month or so. The IceHogs have been skating at a .526 winning percentage since the calendar turned to 2015. Since January 22, the Hogs won three, lost three, won three and lost two before beating Lake Erie on Saturday night.

Rockford is slotted in the fifth playoff spot in the Western Conference if the postseason started today. Rockford could easily ride a winning streak to the top of the heap; Oklahoma City paces the loop with 70 points. The Chicago Wolves hold the eighth seed with 60 points.

Will treading water be enough to propel Rockford to its first postseason appearance since 2009-10? Supposing the IceHogs claim 22 out of a possible 44 points in their final 22 games, Rockford would finish the season with 88 points. That would have them on the outside looking in in two of the past four AHL campaigns.

Rockford missed the playoffs with 87 points in 2012-13 when Milwaukee won on the last day of the season. That group won 20 of its last 26 games just to fall two points short. Last season, the IceHogs went 12-11-1-2 in the same span. Such is the roller coaster that we’ll have to endure. Keep your hands and feet inside the car, folks.

IceHogs coach Ted Dent has been using an interesting line since he got Joakim Nordstrom and Teuvo Teravainen back from the Blackhawks last week. The pair was placed on each side of Dennis Rasmussen in Rockford’s lineup. All three of these players arrived in Rockford as centers.

Dent just doesn’t roll out of bed and make decisions like this. This is coming from above. Someone wants a look at Teravainen as a wing and they are going to get it. Sometimes I think this organization would draft Wayne Gretzky and then throw him out on Andrew Shaw’s wing.

Since this line was rolled out February 13, Teravainen has two assists and Rasmussen has one helper. The most prolific of the trio has been Nordstrom, who has a goal and two assists in the last six games.

Saturday night, Teravainen was in the middle with Nordstrom and Brandon Mashinter flanking him. We’ll have to see if the proposed second center of the future is going to get most of his minutes at that position in the coming weeks.

Following the Blackhawks…ahem…game with Boston Sunday, the news came down that Nordstrom and Scott Darling were being recalled to Chicago. Passing them on I-90 are Ryan Hartman and Antti Raanta, who will be reporting to Rockford in corresponding moves.

If this is a way to get Raanta some extra work in net, it seems to come at a strange time. Rockford has just two games coming up this week. It seems like he could have started for the Hawks Tuesday or Thursday night against the Panthers and gotten some time in the crease. Maybe the organization has Darling slated for one of those games instead. Does the fact that Darling signed a two-year extension yesterday tip the organization’s long or short term plans?

As for Nordstrom, his departure once again leaves the IceHogs without their captain. I was surprised Ted Dent named Nordstrom to the post because I figured he’d be up and down so much this season. Since being named Rockford’s captain October 28, Nordstrom has actually donned the “C” in 16 games.

Recapping The Past Week

The best part about this game was that I got to exchange my ticket for this 10:30 a.m. start for two vouchers. I don’t know if the IceHogs apologized to anyone who took off work to watch this one but perhaps they should have.

Mackenzie Weegar hit on a power play goal in the second minute to put Rockford in an early hole. It only got worse from there as the IceHogs were down 2-0 after 20 minutes.

Michael Leighton gave up three goals on 15 shots in the first two periods. Two came on power plays, the second of which was a 5-on-3. Scott Darling came in for the third period and stopped a penalty shot but did give up the fourth Rampage goal.

Rockford threw 32 shots at San Antonio goalie Michael Houser in the second and third periods but were shut out for the fourth time this season.

I’m not going back and watching this mess again and you can’t make me. I’m piecing together the lineup from the boxscore.

The IceHogs were 16-0 when leading after two periods going into the first of a pair of games in Ohio. Now they’re 16-1.

Rockford took a 1-0 lead into the final 20 minutes. In his first game with the IceHogs this season, Kirill Gotovets scored 13:51 into the second period, skating to the right post and one-timing a pass from Peter Regin as Regin came around the Monsters net.

Lake Erie scored twice in the first five minute and change of the third frame to put the Monsters up a goal. Rockford responded midway through the period. Garret Ross took a pass from T.J. Brennan in IceHogs ice, skated all the way into the offensive zone and got off a shot from the right circle that didn’t get through to goalie Calvin Pickard. Ross was persistent, however, and collected the loose puck, firing past Pickard to tie the game.

It appeared that Rockford would be able to salvage at least a point in the contest until Lake Erie was awarded a power play after a Cody Bass holding penalty. Bass had turned the puck over and was trying to defend Reid Petryk, who had a clear path to the net.

Mitchell Heard found a loose puck in the slot and hit Andrew Agozzino at the bottom of the right circle with 32 seconds remaining to send the Hogs back to the hotel plotting revenge on the morrow.

The IceHogs got on the board with their first power play goal in four games. T.J. Brennan took a pass from Joakim Nordstrom at the top of the left circle and sent the kitten over the mitten of Pickard for a 1-0 Rockford lead 2:59 into the first period.

Lake Erie tied the game on a sort of fluky goal created when Darling tried to play a puck along the half boards in the Rockford zone. The puck went past the goal line and Darling had to leave the puck alone. Before he got set up in the crease again, Troy Bourke sent the puck off of the IceHogs goalie and across the goal line for a Monsters equalizer 13:38 into the sandwich stanza.

Rockford’s response was swift. Dane Walters picked up his first goal as a member of the IceHogs on an equally quirky tally. Walters was at the Monsters blue line and threw a shot into the offensive zone. The puck appeared to nick the stick of Lake Erie defenseman Joey Leach and veered to the stick side of Pickard. The shot checked in with both the left post and the crossbar before finding twine but still gave the Rockford a 2-1 advantage just thirteen seconds after the Monsters had tied the score.

Late in the second, Pierre-Cedric Labrie brought a puck out of the corner and may have gotten away with interference in the process), skated to the right circle and sent a shot toward Pickard, who didn’t play it very well. The biscuit got by Pickard and settled into the net for a 3-1 IceHogs lead. At that point, Lake Erie coach Dean Chynoweth made a goalie switch.

Sami Aittokallio was pulled late in the contest and the Monsters scored in the final minute to make it interesting. However, on this night Rockford would hold the lead it brought into the final period.

In addition to breaking his goal maiden, Walters was named first star of the game.

The IceHogs will be in Texas this coming weekend for two games with the Stars Friday and Saturday. If my schedule allows, I may post some updates from one or both matchups. Follow me on Twitter @JonFromi and I’ll let you know.