High On The Hog: That Time Of Year 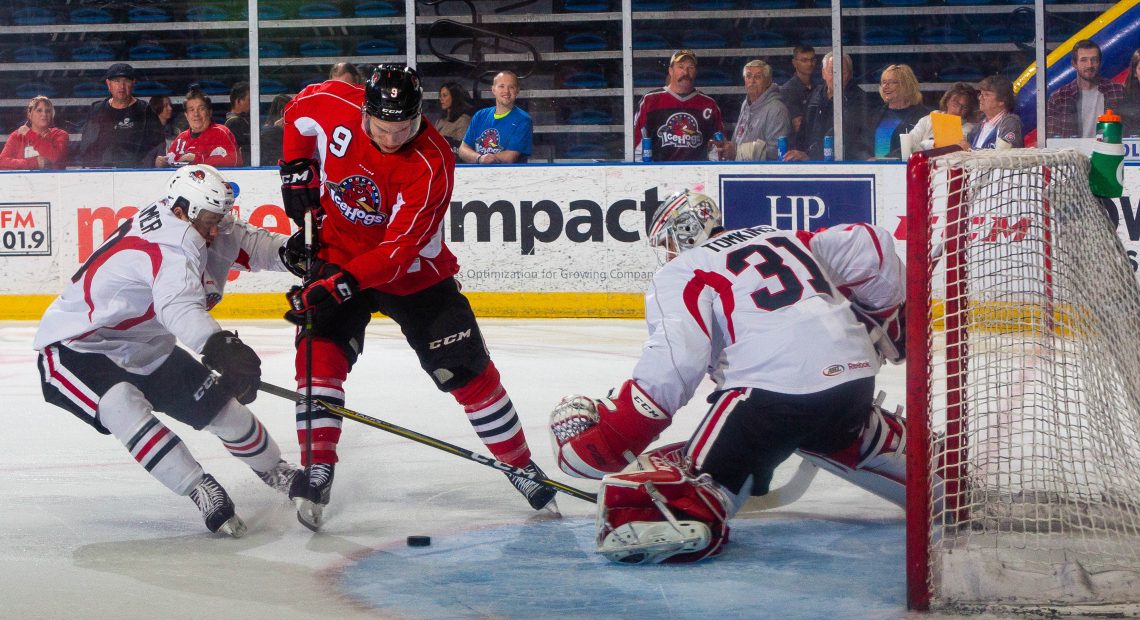 The calendar is telling me that hockey is soon to be underway for the Blackhawks AHL affiliate. That would be the Winnebago County Flying Piglets, known to folks in these parts as the Rockford IceHogs.

Second-year coach Jeremy Colliton will be hard at work this week getting Rockford prepared to open its season. That happens this weekend with a pair of games in Cleveland.

Colliton helmed the Hogs to their deepest foray ever into the Calder Cup Playoffs. Rockford reached the Western Conference Final before being beaten in six games by the Texas Stars.

Four IceHogs who spent a portion of 2017-18 in Rockford (John Hayden, David Kampf, Andreas Martinsen and Luke Johnson) are now on the Blackhawks roster. Colliton is once again charged with pushing more talented skaters through the pipeline to Chicago.

To show just how important the preseason is, Rockford had no exhibition games on its training camp schedule. Fans were treated to an intersquad affair at the BMO Friday night before the Hogs pared down the roster.

The Hogs vs Hogs tilt resulted in a 3-2 win for Team White, following a Gus Macker tally by Darren Raddysh. Regulation goals from the winning squad came from Conner Moynihan (who got sent to Indy for his effort) and Terry Broadhurst, both on AHL contracts with Rockford.

Team Red also got a goal from one of the Hogs AHL signings, courtesy of Henrik Samuelsson. New Hawks prospect Jacob Nilsson got a put back goal to round out the scoring.

After some moves from Chicago, we now have a pretty decent idea of who will begin the 2018-19 season in the Forest City. Here is a look at the roster heading into practice this week.

At 28, Schroeder is the elder statesman in a group otherwise made up of first or second-year players. Most of the forward group is preparing for their second loop around the AHL. Noel is hoping for a healthy go-round and a full campaign in Rockford. Ejdsell saw mostly playoff action last season.

The two rookies in this group are Nilsson, who has several years of pro experience in Europe, and Dylan Sikura, who was assigned to the Hogs after joining the Blackhawks after his college season ended. Both players could make a big impact in Rockford early in the season.

Noel, Iacopelli and Fortin are looking to entrench themselves into Jeremy Colliton’s lineup in 2018-19. Knott will be looking to raise his level of play a notch or two from his rookie season.

Pelletier did not draw an invite to the Hawks NHL training camp. He was also absent from Friday night’s intersquad scrimmage and most (if not all) of the team workouts before that. If he is healthy and ready to play when the puck drops Friday in Cleveland, he should be a steady presence in the Hogs lineup.

Regardless of Pelletier’s availability, Samuelsson and Broadhurst should see a lot of action. Welychka could find himself with the Indy Fuel at times this season but may hold onto a roster spot for now. (UPDATE-Welychka was sent to Indy Monday afternoon.)

As was the case last season, this is a young group that will be more than able to play at the pace Colliton prefers. There would appear to be opportunities to crack the lineup in Chicago for guys like Sikura (pick one), Highmore, Schroeder or Fortin. There are also players who need to prove they belong in the IceHogs lineup, so this should be a motivated group.

Depending on how Colliton pairs up his blueline, Dahlstrom provides a solid option on the top duo. Campbell is this season’s veteran presence; don’t expect too much in the way of offense, but he can sure up a pairing with one of the rookies.

Snuggerud is looking to put some injuries behind him in 2018-19. Raddysh is hoping to build on a solid rookie campaign that earned him his entry contract.

This group lacks the overall experience that was in Rockford to begin last season. Tuulola, Gilbert, Hillman and Carlsson are untested at the AHL level and will need to get up to speed quickly.

McArdle could be destined for Indy before too long (UPDATE-McArdle was assigned to the Fuel Monday afternoon). When all of the Hawks prospects are healthy, there may not be too much ice time for him with Rockford. A native of Rockton, Illinois and a former Junior IceHogs skater, it would be a hoot and a holler if McArdle could get into some action at the BMO.

If last year’s forward group was unproven last season, it’s the defense that offers the most question marks this fall. The development of a young blueline will have a huge impact on Rockford’s fortunes as a team. This is nothing remotely close to the group that played so well in the playoffs last spring. The goalies could be facing a different caliber of shots in the event of a steep drop-off at the defensive end.

Barring any other moves or injury, this is your net tandem this season. It figures to be a solid one, provided Delia builds on the momentum generated by his whirlwind spring in Rockford.

If Delia starts this season the way he finished the last one, he could earn himself some time protecting the crease for Chicago. That depends on how the Hawks goalie situation works out the first few months.

I’d think the organization would like to see Lankinen get around 30 starts in Rockford, though the primary starter’s job should be Delia’s based on his play. Let’s keep in mind that Delia has just 28 AHL games to his name heading into this season. He’s still going to be learning on the job, as will Lankinen, who is making his debut in North America.

Tomkins should get a healthy workload in Indy once he is assigned to the Fuel, which is a move the Hogs will make early this week. He wasn’t particularly impressive at the AHL level in his stints with Rockford last season, so you’d like to see Tomkins perform well with Indy and potentially provide a bit more consistency in any action he sees with the IceHogs in 2018-19.

Last year’s Hogs team limited traffic and high-percentage shots on Delia, giving him time to play his way into a big role in the postseason run. A younger, less-experienced defense will keep all of Rockford’s goalies on their toes.

The Hogs have some new division foes with which to contend in 2018-19. Cleveland slides to the Eastern Conference, while two teams, San Antonio and Texas, move into the Central Division this season.

That makes for an eight-team division consisting of Rockford, Milwaukee, Chicago, Iowa, Grand Rapids and Manitoba in addition to the Stars and Rampage. Of Rockford’s 76-game schedule, 64 will be contested with a Central Division opponent. As always, beating the teams in the Central is key to being in a playoff slot come April.

That includes a dozen games with the Hogs two closest foes, Chicago and Milwaukee. Rockford has ten with both the Wild and Griffins and face both San Antonio and Texas eight times. As was the case a year ago, the IceHogs see the Moose just four times.

The season kicks off in Cleveland, where the piglets are in action Friday and Saturday. Six of Rockford’s first eight games are against non-divisional opponents…then the Hogs settle in for three months and 40 Central matchups.

Rockford has a six-game road trip November 9-20 and a couple of four-game jaunts in the second half of the season. Their longest home stretch is a six-game stand in February. Starting in late March, the Hogs are at the BMO for five straight.

Unlike 2017-18, when Rockford played a home-heavy schedule in the first few months and were frequently out of town the second half, this year sees a more balanced slate. Of the 35 games in the 2018 part of the schedule, the IceHogs play at the BMO 16 times. Starting January 1, 22 of Rockford’s last 41 games are at the big orange box.

Last season, the IceHogs attendance was down to 3915 a night at the BMO, the lowest it’s been since Rockford’s inaugural AHL season in 2007-08. This, despite a exciting brand of hockey and a deep playoff run. It should be said that the crowds were much healthier in the playoffs, eclipsing Hogs postseason attendance records.

Hopefully the trend will reflect the previous season’s success. The Hogs are working hard to get butts in the seats…even puppy butts.

Rockford held Pucks and Paws Night on November 10 last season. The Hogs lost 6-0 to San Antonio, but enough dog lovers had their pets in tow to merit the IceHogs opening the BMO Harris Bank Center to your fur babies for all seven Wednesday home games. And your dog’s ticket is only two bucks!

The Hogs will also have their share of youth jersey, hat, shirt and blanket giveaways throughout the schedule, along with annual events like the Teddy Bear Toss (December 1) and the Pink In The Rink Night. If watching tomorrow’s Blackhawks playing fast-paced hockey isn’t enough for you, maybe some swag will get you heading to the BMO.

Before the Hawks organization sent veteran reinforcements in February, Rockford was a young, exciting team that was fun to watch but was probably going to finish a spot or two out of the playoff picture. Not a one of the veteran catalysts remains from the club that reached the Western Conference Final.

Where does that leave this season’s group? Well, it would be foolish to think that the roster will undergo its share of turnover over 76 games.

Players are going to slide in and out of town at various points in the campaign. A lot of skaters earned looks in Chicago last season and that figures to continue with a lot of youth in the Hawks lineup.

As constructed, a lot of the load will have to be shouldered by returning players like Highmore, Sikura and Louis. Broadhurst and Schroeder getting off to hot starts and being steady, point-producing vets would be more than welcome.

Ultimately, it could come down to how Rockford grows up on the defensive side of the puck that dictates team success. Last spring’s playoff lessons could pay dividends with what is still a very young team. Will it be enough to land the Hogs in the postseason? However Rockford answers that question, the action at the BMO should be worth checking out.

I’m looking forward of another year of covering the IceHogs; follow me @JonFromi on twitter for news and commentary on all things Rockford throughout the 2018-19 season.