It’s Like Looking In A Mirror, Only Not: Hawks at Oilers Preview/Pregame Thread/Eyebrow Threading

THERE WAS A TIME: mc79hockey, The Copper And Blue, The Boys On The Bus

I guess when the Oilers brass are drawing up this reconstruction plan that the Oil have been in for as long as you’d get sentenced for assaulting a cop, they look at the Hawks and try and convince themselves that’s what they’re trying to create. After all, back in the spring of 2008 it looked like the two teams were in the same place.

Except the Hawks bothered to draft and develop actual defensemen and their forwards maxed out. Details, details.

Anyway, if you have to go to Edmonton I suppose last April is as good of a time as any. The Hawks will wind up this mini-west swing at Rexall Place. While we have said the Hawks are just running out the clock here, I’m sure Quenneville will remind them their two trips there last year resulted in 18 goals against and a night Sam Gagner will tell his grandkids about when they keep showing him on highlights on HNIC one night and then they wonder why they had never known he played in the NHL. That should be some motivation to not just serve this one out.

Secondly, after a no-show in Vancouver that even Q said was going in the bin, he’ll probably remind them that you don’t want to close out the season with a sad trombone, no matter how good of a position you’re in. So expect a little more snap to the step tonight.

As for news, Dave Bolland looks to be out in a shock of shocks, which means Q and Hawks fans will get a soft opening to Drew The White. LeBlanc was skating between Kane and Sharp today at the morning skate, and looks all set to try and get himself a contract for next season. It’s certainly worth a look, especially against an Edmonton team that treats defensively responsibility like having warts scraped from sensitive areas and won’t be all that physically engaging. Quick sidenote: the Hawks currently have the NCAA’s and AHL’s leading scorer in the system, and I’m thinking I’m pretty sure I know how the Hawks will try and stop-gap the #2 center role next year until one of Teuvo, Danault, McNeill, or even Kruger stake a claim to it.

Oh, and from that I guess Sharp is a go tonight. Hopefully he’s a little more ready to stick around than he was last time.

As for the Oil, at the beginning of the month they had furiously bought flowers and candy and had the stereo pumped for “In Your Eyes” in a last-ditch wooing of the last playoff spot. And then that went balls-up as they lost five in a row and seven of their last eight. Ryan Nugent-Hopkins went under the knife for a shoulder that was begging for it all year, and they’ll be looking at another top-end pick in the draft which they will assuredly spend on another highly-skilled but light forward. But hey, they’ll look awesome in HD.

The Oilers are always inspired against the Hawks it seems, as it’s an open game they relish. They hung one of the few regulation losses on the Hawks back in March at the UC. They’ll also remember last year. But this is a team that’s out of it, has been getting worked on home ice and everywhere lately the past two weeks, and is probably looking for a reason to spit it. Get up early, shift into 3rd gear, come on home. Simple plan. 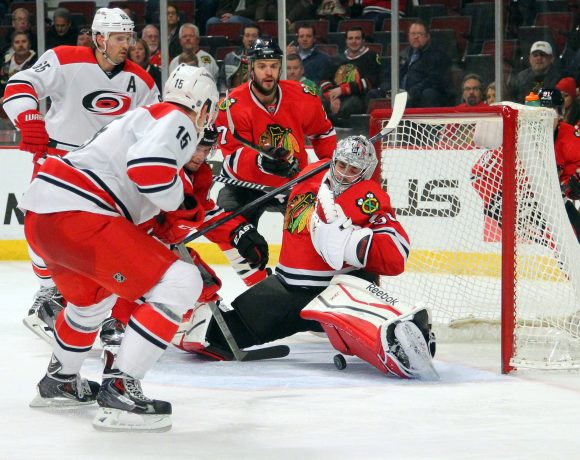