Pigs In Zen: So Close, Yet So Far 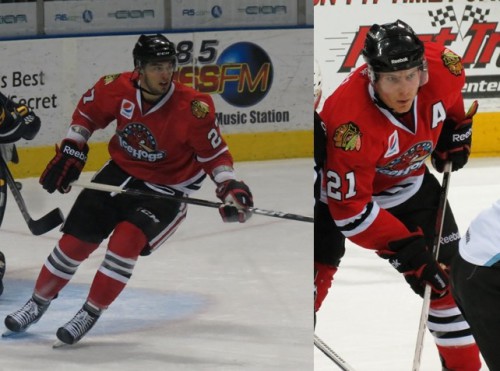 This was it. Week 28 in the AHL schedule. The IceHogs had 2 games left in their schedule and they needed all 4 points to keep their playoff hopes alive. They weren’t in complete control of their own destiny though—they needed the Milwaukee Admirals to lose just one, measly game in order for Rockford to make their first playoff appearance since 2009-10. Only half of the plan worked.

The first game of the final week of the 2012-13 regular season was on Friday, April 19th in San Antonio, Texas as the IceHogs took on the Rampage. The goals came fast and furious in this contest, with the final score ending up as 9-4 in favor of Rockford. Jimmy Hayes and Ben Smith both tallied twice in this contest. The other 5 goals came off the sticks of Brad Mills, Brandon Svendsen (who registered the game winner), Jeremy Morin (his team leading 30th of the season), Brandon Pirri and Maxime Sauve (his goal was his 1st in an IceHogs sweater). Henrik Karlsson was in net for the Hogs and made 28 saves.

The second game of the week was the Hogs’ regular season finale and it came in Cedar Park, Texas against the Texas Stars. The Stars scored the 1st 3 goals of the game; former Chicago Wolves defenseman Kevin Connauton tallied the first one from center ice… Starting at 8:41 of the 2nd period, the IceHogs scored 5 unanswered goals to take the victory 5-3. They received the markers from Adam Clendening, Martin St. Pierre, Brandon Svendsen and got two from Ben Smith (including the game winner) for the second consecutive night. Henrik Karlsson started the game but was yanked after the 3rd goal and Kent Simpson came into replace him. Simpson made 32 saves in his first AHL victory of his career.

The 4 points from this emotional weekend weren’t the only thing that the IceHogs needed in order to make the playoffs. Milwaukee had one game in-hand going into the weekend and needed to lose it in order for the Hogs to make it. The Charlotte Checkers couldn’t beat Milwaukee Friday night. The Chicago Wolves couldn’t beat Milwaukee on Saturday night, so this left it up to the Peoria Rivermen—in their final game of existence—to do the job on the last day of the regular season. Unfortunately, Milwaukee beat the Rivs 3-0, which put them into the 8th spot in the Western Conference standings and left the IceHogs out in the cold in 9th place by 2 points. 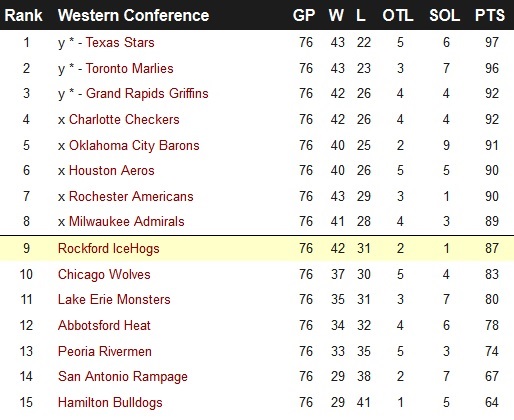 It was heartbreaking to say the least. I’ll be honest, I’m still not over it and probably won’t be for a while. I can’t imagine what it was like for the players when they saw the final score of that game. This IceHogs team had so much more to give and probably could have knocked off the top-seeded Texas Stars in the first round, but now we’ll never know. But this shouldn’t shine a negative light on the season. It was an outstanding and fun one. Fans should be proud of how the boys played all year—and the guys should be proud of themselves. They never gave up (see the fact that they had an AHL leading 11 3rd period come-from behind victories this season) and they played their tails off game in and game out. Each player grew as an individual on and off the ice; the coaching staff and fans couldn’t have asked for much more.

–Henrik Karlsson was not on top of his game this weekend. He gave up a ton of rebounds and it nearly killed the Hogs when they weren’t playing their best defense. The offense essentially saved them this weekend until it was able to buckle down in the 3rd period on Friday and the 2nd period on Saturday.

–Kent Simpson played some outstanding hockey on Saturday when he came in to relieve Henrik Karlsson. He was very calm in net, had solid positioning and made key saves to help the Hogs get the 2 points.

-Before the offense came to life on Saturday, the most noticeable forwards were Brandon Pirri, Rostislav Olesz and Ben Smith. They were working the hardest, getting to the dirty areas and playing great in all 3 zones. Smith didn’t start on that Pirri line with Olesz, but by the time the middle of the 2nd period rolled around, he had slid up onto that line. Even when the pucks started going in for Rockford, they were still the Hogs’ best line.

–Brandon Svendsen always plays solid hockey, but this weekend he was able to chip in offensively and finished the regular season with 2 goals in the last 2 games. They were huge goals as well. His goal on Friday night held up as the game winner and his goal on Saturday night tied the game up at 3 at 8:33 of the 3rd period to give the Hogs more momentum to propel them to their victory.

-When Ben Smith returned to the IceHogs line-up, there were 4 games left in the regular season. In those 4 games, Smith put up 11 points (8 G, 3 A) and was +9. I think that stat speaks for itself.

–Phillip Danault and Mark McNeill were in the line-up for the last game of the season, but they were benched for the majority of the game since the Hogs needed to have all of their big guns rolling to make a comeback on the scoreboard. Joakim Nordstrom was the other part of that 4th line, but he saw a good amount of ice time and was pretty responsible defensively. He saw some time on the penalty kill; the Hogs only had to kill off one Texas power play, which they did.

-IceHogs forward Jimmy Hayes had a chance to score on a penalty shot on Saturday night after he was slashed on a clear-cut breakaway, but on his attempt the puck rolled on him and he never got a shot off.

-I’m sure everyone knows where IceHogs goaltender Carter Hutton was for these last 2 games, but if you don’t know:  he was recalled by the Blackhawks on Wednesday, April 17th.

-Here is what the top 15 in IceHogs scoring looked like for 2012-13. The guys that have X’s by their names means that they’re not on the roster anymore. 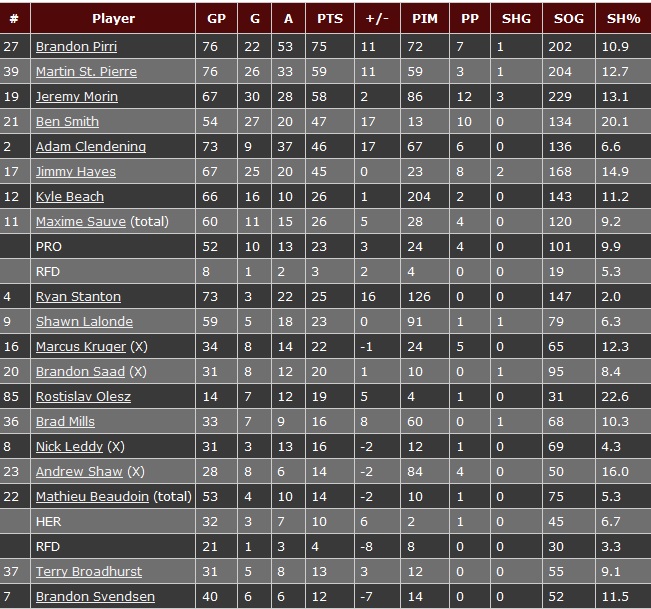 -The IceHogs led the AHL in penalty minutes. They racked up a whopping 1716 of them.

-The AHL has been in operation for 77 years. Never has the league seen a team record 42 wins and not make the playoffs—until now with the IceHogs.

-IceHogs winger Jeremy Morin was 7th—really tied for 6th with Providence’s Jamie Tardif—in the AHL in goals with 30 of them.

-The lines and D pairs on Friday night looked like this:

-On Saturday, the lines and D pairs looked like this:

-Scratched for Rockford during both games were:  Wade Brookbank, Mathieu Beaudoin, Kenndal McArdle and Terry Broadhurst (all healthy).

-A great article that had some key tidbits of information from the 2012-13 season was posted on the IceHogs website. Check it out.