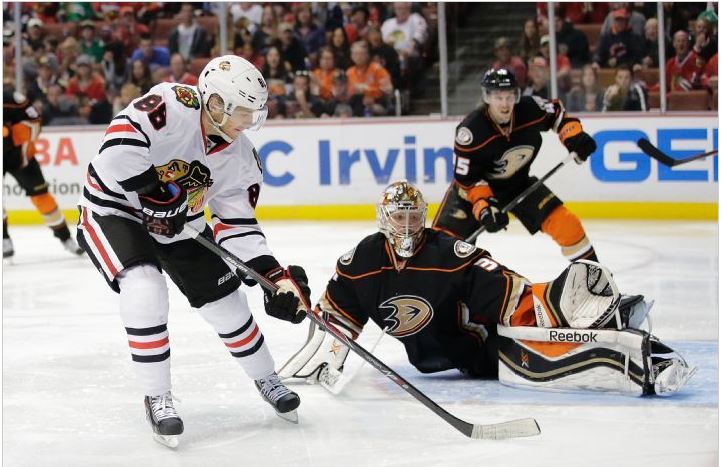 In what has become something of a tradition, the Hawks once again took on the Ducks in Orange Country for a Black Friday matinee. However, the Hawks bucked tradition by basically taking control of this from the word “go” in what could arguably be their most definitive victory of the year, and would be the most enjoyable were it not marred by predictable Ducks asshattery.

The Hawks carried nearly all the play in the early going, and the first sustained bit of Ducks pressure resulted in a wonderful 150 foot pass from Brent Seabrook to Brad Richards that at first looked like a reckless icing attempt. But the replays showed Seabrook spotting Richards alone at neutral ice and he exhibited the passing ability that had previously made him so dangerous from the back end. Andrew Shaw would make it 2-0 finishing off a nice passing play from the de-facto fourth line, which not only included a completed Duncan Keith slap pass, but also a twisting backhand pass from Gorilla Salad. Strange days, indeed.

Hampus Lindholm bunted a fluttering mid air puck that everyone else had lost sight of past Crawford to bring the Ducks within one, but that would be as close as they would get. Patrick Kane capped off another multi-point effort with the insurance goal in the second off a beautiful pass from Kris Versteeg, and the empty netter to ice it. Hawks 4, Ducks 1, Mumps (hopefully) zero.