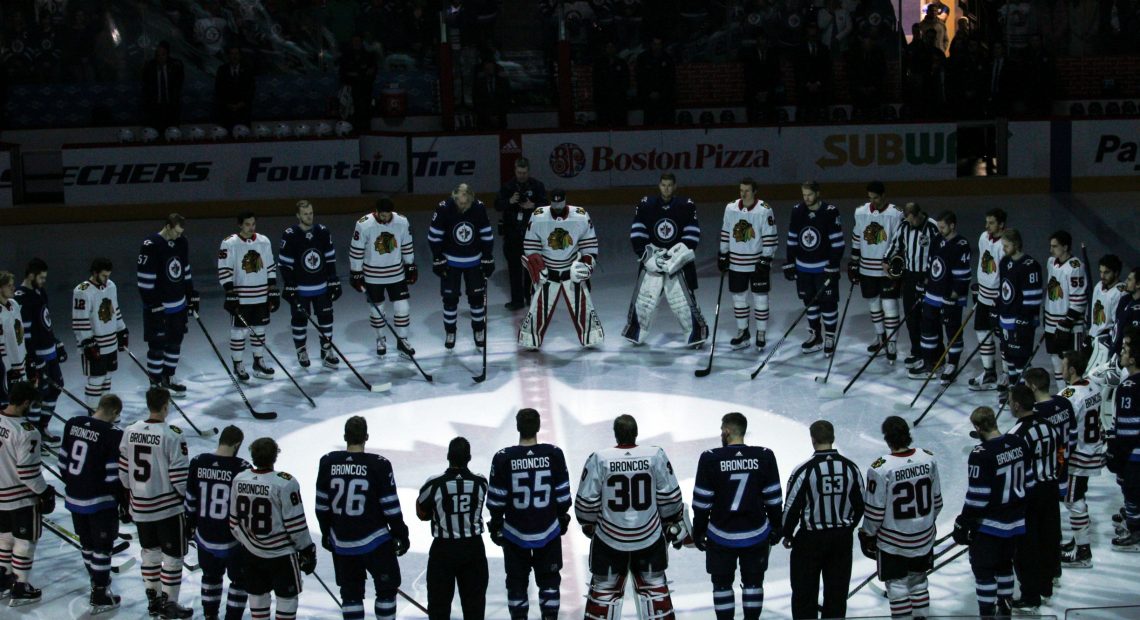 It’s over. It’s finally over. The Blackhawks season has come to an end, with a significantly less exciting outcome than it started with. Let us all store vow to never speak of this season again (until this coming week when you will read several eulogy-esque posts on this site). Gonna take a slightly different approach with this wrap, because at this point there is nothing more to take from the game itself. So if you don’t mind, I’m gonna give you a quick rundown of how the game went, and then touch base on a few of my takeaways and favorite moments from the season:

– First things first, I want to tip my cap to the way these two teams paid tribute to horrible tragedy of the Humboldt Broncos hockey team. From the vigil in the picture above, to the wearing of the word “Broncos” on every player’s jersey, and the donations made by the teams and league, they did a wonderful job of paying respect to the tragedy and offering their support. Good on them.

– The first period was pretty boring. Both teams had a few chances but couldn’t capitalize, but Jets controlled most of the play and didn’t seem particularly inspired to do anything drastic on offense. The Blackhawks, meanwhile, didn’t seem to have much interest in doing anything at all. Dustin Byfuglien opened the scoring with a power play bomb in the first, Winnipeg scored again in the second period when Kyle Connor beat Jeff GL Ass on a breakaway, and that was basically game over. The Jets added two more in that frame, and Seabrook saved face for the Hawks a bit by notching a goal about midway through the middle frame, but that was all. Nothing of major note happened after.

– Let’s address the elephant in the room – the biggest takeaway from this season is that Corey Crawford is really freakin’ good, and beyond a shadow of any doubt, the most important player on this Blackhawks team. We all knew this team’s biggest issue was that they didn’t have adequate goaltending before it became a talking point, and all of the Blackhawks himming and hawing about it NOT being the goaltending only proved that point further. They were pointing a big arrow to the secret treasure with that said “DEFINITELY DON’T LOOK HERE.” There’s no reason to think he won’t be able to come back at 100% next year, but we as fans just have to hope that he does, because if he doesn’t, next year might even be worse than this one.

– The next most obvious takeaway from this year is that the Hawks need help on the blueline. This is a conversation that’s been had countless times already. No obvious hope is coming in this regard, unless a miracle happens and the Hawks win the Dahlin sweepstakes. Hope and pray for that one as well.

– My favorite moment of this season was Alex DeBrincat’s first hat trick, with his second and third Hat Tricks coming at number 2 and 3. I was thrilled when the Hawks landed him at number 39 a few years ago, and I can’t wait to see more of him moving forward. He is the future of this time, along with Schamltz, up front.

– Thank you to all you guys who read this website and these wraps. I think I can speak for everyone when I say that we truly appreciate all of you and all of your support. We quite literally can’t do this without you guys to listen, read, share, etc. Here’s hoping we can produce some good content for you this summer, and that there will be some big additions to talk about (lookin’ at you, Rasmus Dahlin and John Tavares).