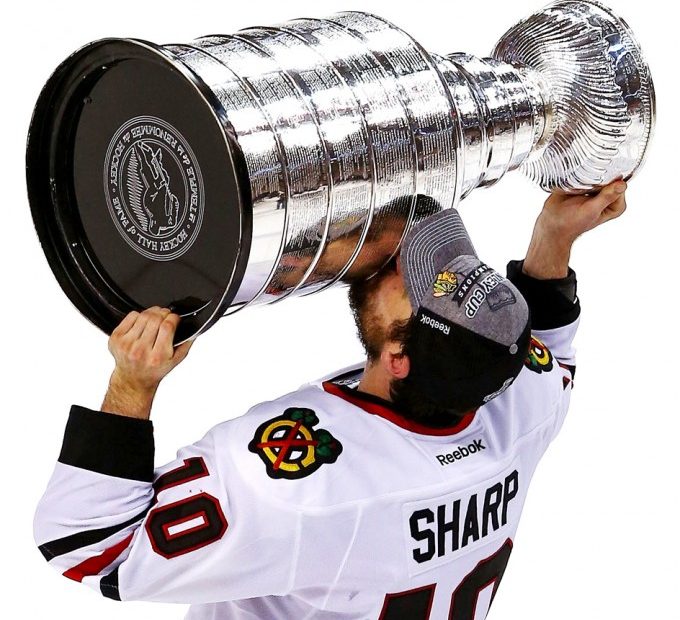 The quick and obvious preface to what’s about to come is that nothing is announced, guaranteed, or set in stone yet. However, given the events at the end of last night’s loss to the Blues, the comments in the media, and the fact that he maybe should’ve done it last year, it appears as though Patrick Sharp is going to be retiring after tonight’s game. And I am genuinely, terribly sad about it.

I don’t know if Patrick Sharp will have his number hung in the rafters, but that’s more because of the era in which he was a Blackhawk – I’m just not sure this team is gonna hang up six numbers, and it seems like a given that 2, 7, 19, and 88 are gonna go up, and 50 probably should too. Had he played in any other era of this team’s history, he’d be an easy no-doubter to hang that number high.

Fifteenth in team history for points. Twelfth in team history in goals. One of the best two-way players this team had seen in a long time when he arrived, and a shot as devastating as his looks. A leader on three Cup winning teams, chased out of town because he got old and still carried an expensive cap hit. Another unfortunate casualty of the NHL salary cap and Canada’s once free-falling currency. Imagine were he’d rank all time on this franchise if he hadn’t been forced out.

Sure, there were some personality issues. His refusal to continue playing center created the 2C gap that this team suffered from for a while, but it didn’t really bite them that bad, seeing as they still won two Cups without one. He might’ve ruined Duncan Keith’s marriage. He was known to be cocky toward fans.

But his play was incredible for so long, he slaved away in a bottom six role in 2015 to give that team the depth they had. The impact of his presence on that line with Vermette and Teuvo cannot be understated. He is an all-time great Blackhawk, a true team legend, and his was the first Blackhawks jersey I ever bought with my own money, when I was 14 years old. If this is the end, allow me to say it: Thank you for everything Sharpy. Good luck in retirement. And please stay away from my wife.