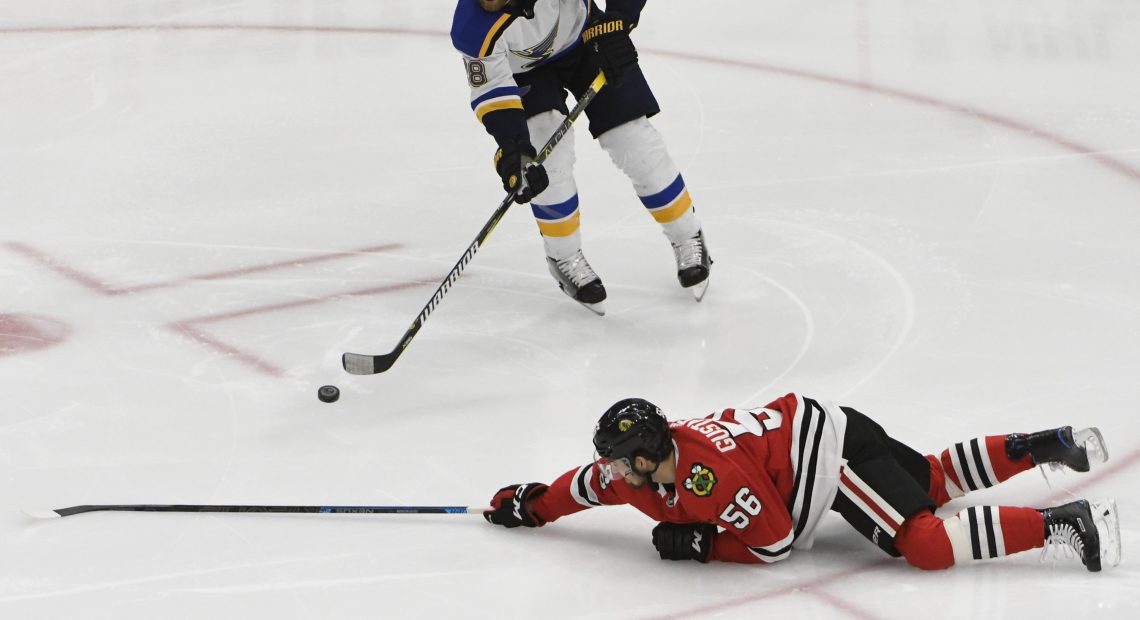 Like a day at the Robert Crown Center, this game leaves us cold, bored, and completely disenfranchised about things that are supposed to be fun. The good news is that none of it mattered, and it’s now almost over. To the bullets.

– This was less a hockey game and more a farewell to one of the most important Blackhawks of this era, Patrick Sharp. He got a nice video montage both before the game and in the third, and was slotted on the top line next to Kane, in hopes that he’d be able to recreate some of the magic of his younger years. While it’s no surprise that nothing really happened, it was a nice gesture from the organization. It hardly matters that Sharp was the worst possession player for the Hawks by far. Given that Colorado lost last night, the outcome of this game was window dressing, so giving Sharp a good sendoff was about as good as it was going to get.

It might be easy to forget just how good Sharp was for the Hawks in his prime, but I’m not going to take that away from whoever does his year-end wrap. All I’ll say is I’ll miss what Sharp once was and am glad to see him retire as a Hawk, which I assume is what he’ll do following tomorrow’s game.

– J-F Berube looked good until he didn’t, which is about par for the course. Crawford can’t come back quickly enough.

– One positive from this game was the chemistry between DeBrincat and Sikura. Sikura fed DeBrincat a few nice opportunities tonight, the best of which coming in the first period. Sikura took advantage of a Carter Hutton turnover behind the net and fed DeBrincat for a high-danger zone shot that Hutton managed to stuff. Then, in the second, DeBrincat returned the favor with a crisp pass through the Royal Road to Sikura, who also got stuffed by Hutton. The only real question is who’s going to center these two, because Ejdsell looks like a sore thumb out there with them. He’s going to need to progress by leaps and bounds if he wants to be the guy for these two.

– Duncan Keith had one of his worst games in recent memory tonight. He had three turnovers by the second period, and never looked comfortable on the ice. Again, this was a meaningless game, but watching Keith struggle as badly as he did is never fun. Like most of us, he’s obviously ready for this year to end.

– Connor Murphy also had a bad game, which makes two stinkers in a row for him. Only Duncan Keith had a worse possession night for Hawks defenseman, and what was worst about Murphy’s night was his regression into balloon hands in his own zone. He’s got a lot of potential as a defensive defenseman I think, but his struggles to exit his own zone are going to need to improve if he wants to stake his claim as the Top 4 guy we all think he can be.

– Outside of the Sharp farewell tour, this game was drudgery. The Hawks had 13 shots about midway through the third, and never looked alive at all out there. They finished with 20 shots, but I’d be hard pressed to describe any more than two. The highlight of the game was the two free chalupas and one cheesy gordita crunch I got in my Taco Bell order, which are currently calling my name from the microwave, the disgusting animal I am.

That’s it for the home games this year. In a game against a desperate rival, the Hawks rolled over, which doesn’t really deserve anything more than a shoulder shrug at this point. The last one’s tomorrow, and you should join Adam Hess for that one.

It’s been a pleasure writing for you all about this Hawks this year, despite the performances on the ice. We’ll be back at it for the playoffs and postmortems soon enough.

Line of the Night: I didn’t catch the actual quote, but Brian Campbell suggested that the Hawks need a “character guy” like Andrew Shaw or Danny Carcillo during one of the intermissions. The perfect summary of this brat-fart season.