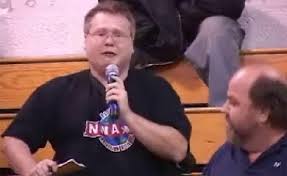 Now that the Hawks games mean nothing, it’s hard to imagine getting worked up about these games in any way, and yet seeing them play their asses off and outplaying the Blues, I found myself sitting on my couch feeling like this guy. As a wrestling fan myself, I can empathize with feeling emotionally invested in something you know isn’t what it’s presented as, and tonight that was me, constantly battling this desire for the Hawks to not drop themselves farther down the draft lottery (which, they can’t climb much higher anyway, so that’s dumb too) and rooting like hell for them to beat the Blues. Some things are bigger than logic. Fuck you St. Louis. Let’s do this:

– Just about everyone at this here site was unavailable to some extent tonight, so I took up the sword but still missed the first period. When I got the game on with about 17 left in the second, I was pretty surprised by how competitive and hard the Hawks were playing in this game despite the games now being meaningless as I said before. It was clear from the quotes from Jonathan Toews and Patrick Kane today that these guys are pissed off about missing the playoffs again, and they definitely channeled that into a desire to fuck over the Blues and their playoff seeding hopes. There were still plenty of gaffes in here on the Hawks end, and we will talk about a few of them, but seeing them respond was at least notable, I think. If only they had cared about this season a few months ago. Maybe they can actually carry this piss and vinegar into next year.

– It’s still hilarious to me that the Hawks got Dylan Strome for Nick Schmaltz. Not that Schmaltz wasn’t and isn’t a fine player (though now one that is WAY overpaid), but we definitely knew what he was by the time the Hawks sent him to the desert for Strome, who had barely gotten enough of a sniff of the NHL to have any conclusion that he couldn’t hit the ceiling that was once considered very high. And yeah, his shortcomings are there, and have been all year. But dammit if he doesn’t make up for it enough with the vision and hands, and the pass he made to Kane tonight on the third Hawks goal was just another example of that. The Hawks are definitely coming out on top of this one.

– Let’s talk about some gaffes. Firstly, Seabrook and Forsling were out there together again tonight. Not for long, but any shifts of those two together is too many. That’s the whole gaffe. Please stop that. EDIT– Forsling didn’t play tonight, I just stink at paying attention to who’s out there. I guess I’ve just been traumatized by 7-42 so often that I just expect it even when it isn’t happening.

– Now the elephant in the room, which at this point has now sat on and destroyed your couch, coffee table, recliner, and television: Duncan Keith could not give less of a fuck about playing hockey for Jeremy Colliton. Truthfully, I wish I could show the level of contempt and disinterest in my job that this guy does and still have the level of job security he does. We know the give a shit meter was already on zero, but he just about sent it negative tonight, particularly on the Blues third goal. To have little interest in playing well at this point can be understood, given that the Hawks are fucked, but to just have no intent to even feign effort at this point is almost impressive.

– And that brings us to an important thought – the Hawks might have to pick between the wife and the dog this summer. It’s clear that the wife (Keith, because he’s made our lives better for years and we never appreciate him enough) does not want the dog (Colliton, because he’s smelly and keeps shitting himself everywhere) around any longer. But as can happen, we may see this summer that the Hawks have overcommitted themselves to the dog. Perhaps these two will come to an agreement over the summer. Maybe an addition of a real defenseman that can partner with him will turn Keith’s give-a-shit meter back up. Maybe Colliton really will get motherfucked into becoming a good coach by this blog. Maybe neither happen and we’re stuck in a bad marriage with a stupid dog (I don’t hate dogs, I love them, but this one is stupid) and we will be miserable again for another year. Who knows! Eat at Arby’s.

– We almost made it, folks. Two more.