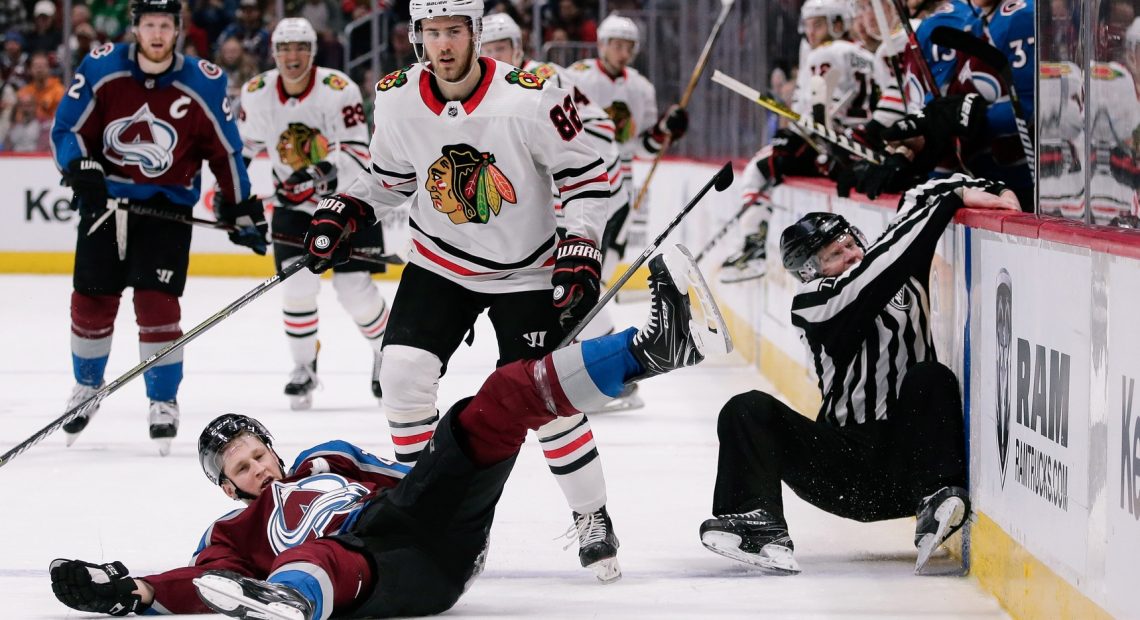 When the site staff originally discussed which game wraps we would be able to write in these final weeks of the season, I had signed up for yesterday and Rose had tonight. She asked me to swap because she had something to do this evening, and I obliged because I am the world’s best co-worker (please don’t ask my co-workers if this is true, just take my word for it). I want to trade back. Yes I know I can’t. Whatever. BULLETS:

– Maybe I am just not interested enough given the season is more-or-less over, or maybe I just keep getting the library quality games to wrap, but I was very bored by this game. The Hawks really didn’t even play all that poorly – they dominated the first period, in fact, and ended the night with a slight edge in shot attempts – but it was just a snoozer of a game. There were some exciting chances both ways early in the first, but I wasn’t that impressed with the play of either team, save for whenever Nathan MacKinnon was on the ice for the Avs.

– Until the third period, this was a scoreless game at evens that the Hawks were only losing because of their putrid penalty kill. I wrote about this last year when I was still at Second City Hockey, but the Hawks biggest problem on the PK remains that they are entirely too passive, and pretty much let the opponent dictate the play and do whatever they want. I think it’s fair to blame some of it on the fact that they don’t have the most reliable netminders, and in tonight’s case a rookie, but they get in such a tight box and don’t even flirt with pressuring puck carriers anywhere on the boundaries of the zone. The end result is Mikko Rantanen having plenty of time to tee one up for Tyson Barrie in the second, or MacKinnon having the time to do so for Rantanen in the third. It’s just embarrassing, really, and I don’t quite understand what thee Hawks’ plan is with that strategy on the PK, if there even is one.

– Blake Hillman made his NHL debut tonight. That is definitely something that he did tonight, I can assure you. That is all I have to say about Blaine Hillard on his NHL debut night. I guess him not being noticeably awful is a good sign for now. I hope Blaze Hilltop has a good NHL career and can fix the Blackhawks blue line. Who were we talking about again?

– I’ve made it known I am “team tank,” but at this point that’s about done cuz the Hawks can’t really get much lower down the standings without some miraculous efforts from those below them. I say that so you can know how truly difficult it is to watch them lose 5-0 on a Friday night and not root for it to just get continuously worse. This is the darkest timeline.

– HEY! We only have to do this three more times. And you and I only have to do it once more, and not for a whole week – I will see you next after the season finale. Try to enjoy your week, and have a Happy Easter if you’re celebrating!