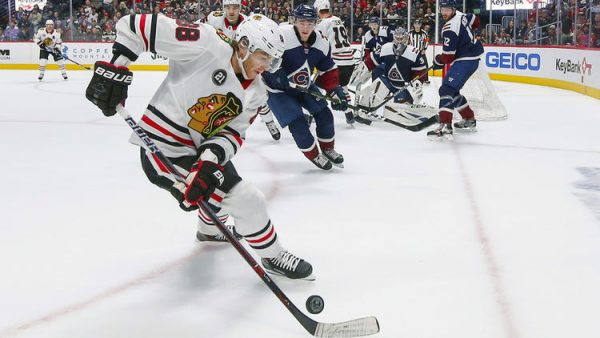 It’s over, isn’t it? I know it’s not technically over, i.e., not mathematically over, but it feels like it might as well be, right? This was yet another framed portrait in the gallery of shame that is the Hawks’ “must-win” moments this season. So tomorrow’s re-match is probably the real, final must-win (I dunno, math is hard guys) but it almost feels like it’s too late already. Let’s get to the bullets:

– As cheesy as it sounds, this did end up being a game of inches. Dylan Strome shooting just wide on their first power play, Dominik Kahun also in the first missing an open net as puck took a funny bounce over his stick, Alex DeBrincat‘s one-timer in the second going just wide…had any of those chance (or Kane’s breakaway in the first or Saad and Kahun’s 2-on-1 in the third) gone other than how they did, this would have been a different game. Neither team had a huge number of chances and the Avs just took better advantage of theirs than the Hawks did. Sven Andrighetto‘s goal maybe-maybe-wasn’t a high stick (I don’t think it was) and maybe-maybe-wasn’t goalie interference (a little more likely), but neither potential offense was so egregious as to nullify the goal. And that was the right call. It was just the wrong team was the beneficiary of that luck.

– To add to that point, the Hawks only gave up 25 shots, which is, well, a normal number of shots for a team to give up, as opposed to the 752 they usually surrender. So at the time they needed to hold it together, they managed to not give up an insane amount but they did give up more high-danger chances, and you saw what Colorado did with them. And that’s with the Hawks even getting a bit of good luck with the Avs hitting the post a couple times, so it could have been worse.

– That doesn’t mean the defense was necessarily great today. Erik Gustafsson took a stupid-ass holding penalty in the second period that started the PK that ended up being a 2-man advantage. I realize that Kampf’s high-sticking penalty is what directly led to the 5-on-3, but that was at least in the heat of the play, as opposed to Gus who lost his stick and just decided to bear hug a guy like no one was going to notice. It was just silly. And that sequence led to the go-ahead goal. Forsling and Seabrook also had their moments, including Foreskin getting burned by Andrighetto for the third goal. It wasn’t a total defensive dumpster fire today (everyone was above 50% in possession at evens, so there’s that) but in total it wasn’t enough. If this were a different time of the season I may say it’s a good sign or at least an improvement that Crawford didn’t have to be absolutely otherworldly to even keep it close. But it really doesn’t matter now, does it?

– Also sort of fitting is how it was Patrick Kane making a lazy play that put the nail in the coffin. This guy’s been CCYP’s workhorse, and as Sam noted recently, he’s been slowing down and likely tiring out, and whether it was that his give-a-shit meter was too low or the mileage just piled up too quickly today, when he had to maintain possession as Crawford went to the bench, Kane’s half-ass passing attempt was picked off and led to the empty-netter. Yes, the Hawks would probably have lost anyway but that was quite the punctuation mark.

– Brandon Saad had a really interesting game—I don’t know what else to call it. Sometimes he was fucking up left and right, such as bookending the first period with tripping penalties that luckily Colorado didn’t convert on but that were damn nerve-wracking. He maybe-probably should have shot on the 2-on-1 with Kahun in the third period but at full speed with the laid-out defenseman coming towards him it’s hard to pass that judgement. And then other times he was fantastic, getting an assist on Gustafsson’s goal, out-muscling Nathan MacKinnon for a takeaway in the second, and doing the little things right. No one can accuse him of not trying, and he was all over the ice and finished with a 63 CF%. The sad thing is, like everything else today, it just wasn’t enough.

– In addition to not giving up a million shots, the Hawks led in possession the whole game (64, 62, 56 CF% at evens, respectively). And they seemed to genuinely have their hearts in it (Kane’s lazy pass notwithstanding). It was downright frenetic for most of the game, and even when they fell behind they didn’t pack it in. It was the damn 5-on-3 and a collection of their own missed opportunities that screwed them over.

– Stupid Alexander Kerfoot was all over the place and managed two assists. Philipp Grubauer was predictably good today, as was Nathan MacKinnon who had five shots. I was genuinely surprised he didn’t score.

Well, we’re at the absolute last of the last chances now. The Hawks did a lot of things right and conceivably could have won this game, so maybe that means tomorrow they’ll get the bounces and breaks that they didn’t today. It’s possible? But would it matter? Onward I suppose…