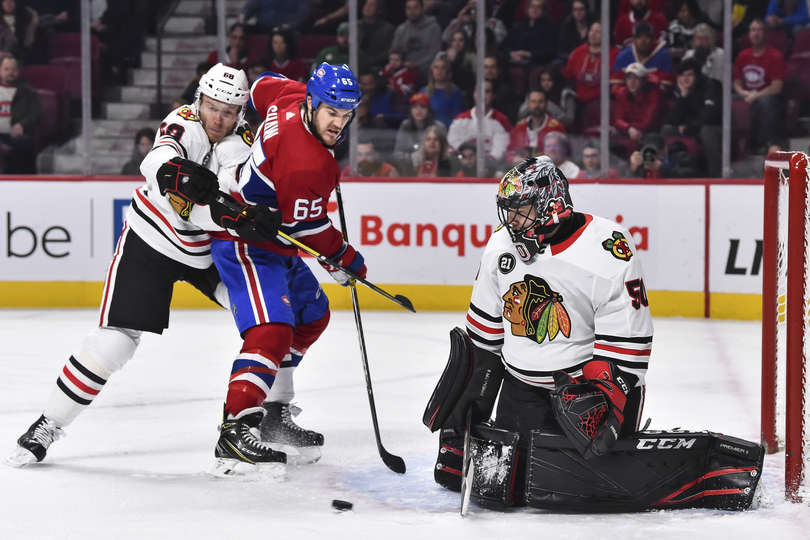 Tonight was a goalie win and this is why I love Corey Crawford. There were some other bright spots but the Hawks yet again gave up a ridiculous number of shots and Crow pulled not just his usual headstand in Montreal but a season-high and even a career-high in saves. Let’s get to the bullets!

– Crawford definitely recovered from his illness the other day, and he’s the reason the Hawks won this game. He stopped 48 shots tonight, and his saves ranged from the flashy highlight reel ones to workaday solid positioning. His rebound control was excellent. And while the Hawks defense was relatively decent through two periods and the start of the third (including a key penalty kill), by the second half of the third they crumbled and basically tried to do a performance art interpretation of their Wednesday night debacle. Even before that, Crawford repeatedly kept them in the game when they were scoreless or then clinging to a one-goal lead. Overall the number of shots he faced was absurd and a return to the bad old days like what  we saw the other night, after a few games of the Hawks giving up under 30 SOG which apparently was a lucky fluke. After the injuries and all the bullshit (and literal shits), Crawford is still god.

– The lines got shuffled at the end, but for the majority of the game the top line of Saad-Toews-Sikura was dominant. Together these three had a 65 CF%, and between them nine shots. Sikura continued to not score…and it’s becoming laughable and sad at the same time. He was excellent tonight overall, with four shots including one goalpost that missed by maybe a couple millimeters, and a give-and-go with Perlini at the end of the third where Perlini was trying SO HARD to get him the puck and passed it into Sikura’s skates instead of putting it on his stick. The kid had a 58 CF% on the night and was all over the ice. Either he’ll score 10 goals in one game, or he will never score one ever in his life (with the Hawks at least).

– Also impressive from the top line was Brandon Saad. Right at the start he had some nice takeaways and also straight-up burned Shea Weber, which is always enjoyable. He wasn’t as noticeable offensively after the first period but he was fast and smart with the puck all night. Jonathan Toews, on the other hand, must have run over the ref’s dog or banged his daughter or something because he got called for two bullshit penalties. Toews was fine for the most part but definitely not happy with the officiating. It was the second silly call that led to the penalty kill right at the start of the third, which luckily they got through, and then Perlini scored and they got some breathing room.

– On that note, Perlini scored again, so thumbs up to him hitting a hot streak at exactly the right time. And in the most festive aspect of the game on this St. Patrick’s Day weekend, our Large Irish Son scored the first goal! Connor Murphy played really well the entire night so it’s fitting that he got the go-ahead goal. Now, he and Slater Koekkoek didn’t exactly light up the possession numbers (a wretched 33 CF% for the pair and Murphy individually was no better). But in yet another case of the eye test and the numbers not matching up, Murphy’s positioning around the net was great and he had multiple clears that at least helped Crawford, which is more than can be said for some of the other jamokes. The possession leader on the defense tonight was Nachos with a whopping 45 CF%, so don’t let Murphy’s numbers fool you. He was good tonight.

– The power play has continued to go cold, which in a way is a course correction? Maybe? If I say it like that will I stop worrying so much? After being so terrible for so long and then so unstoppable for a stretch I guess it stands to reason that it would cool off a little. But I won’t lie—it would be encouraging if they could at least get one goal on the man advantage if they’re going to cosplay that they’re a playoff team. Did you know it’s been since the Anaheim game on February 27th that they got a power play goal? If you did, I’m sorry. If you didn’t, I’m even sorrier.

Two points are two points and they need every single one right now. Also lol Montreal, it’s great when we’re not the only ones who fuck it up when it matters. If the Hawks are really going to steal the last wild card they have to keep this going on Monday. Can they? At this point it’s anyone’s guess who shows up, but at least we know what Crawford is still capable of. Onward and upward…