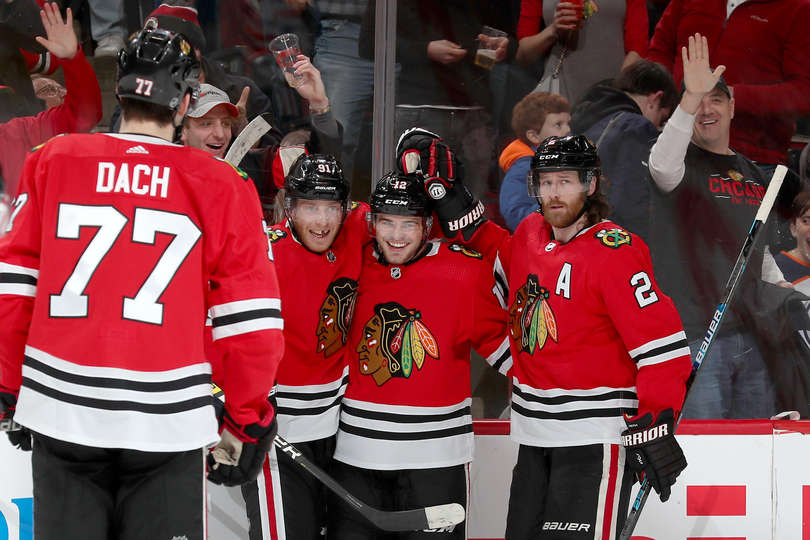 It got a little more itchy than it needed to, but the Hawks were ultimately able to hang onto what was a comfortable lead tonight against the Oilers, and grab their fourth win a row to keep their minuscule-but-still-existent playoff chances alive. Let’s discuss:

– The first period was an encouraging and entertaining frame, as the Hawks did a nice job trading possession and chances with the Oilers, and ultimately netting the first goal of the game. While I loathe agreeing with anything Pat Foley ever has to say at this point, he was correct in pointing out after that period that the shot total from the two teams was a lot lower than it felt it should have been. But with that said, the Hawks were able to escape with a lead after a beautiful play by Dylan Strome set up Patrick Kane for a great scoring chance that he converted after showing some nice patience.

– The second period was all Blackhawks, as they notched a 76.67 (!!!) CF% in the middle frame and out-chanced the Oilers 12-4. It all started right away when Drake Caggiula went into full on hustle-play mode to win a rush and gain possession before a little kerfuffle in front of the net led to a Jonathan Toews wraparound chance that went in off a skate. Later on, Alex DeBrincat was able to cash in on two excellent chances with a little help from Caggiula parking his husky ass in front of Mike Smith, who was promptly pulled from the game after DeBrincat’s second and the Hawks fourth, only to throw a huge pissbaby tantrum while his paraded down the tunnel. In other news, I will be uploading the video of that tantrum to every adult video site known to man for your pleasure. I am a man of the people, after all.

– Let’s talk a bit about DeBrincat’s two goals, as I don’t have much to say about it but do want to touch on it specifically. Mostly I just want to say, damn it felt good to see the man get a pair tonight. It’s been a rough season for Top Cat due to getting hockey BABIP’d to high hell all year, but having those two go in had to feel good for the kid. If the Hawks do have any chance of going on a miracle run and making the playoffs, he is gonna have to get off his shnide a bit, so hopefully this was just the start to that.

– Staying with Top Cat but for a different reason, I cannot figure out for the life of me why he is still standing in front of the net on the PP1 unit. There is no way that is effective in the way it is intended to be, if Coach Smooth Brain is hoping that a few pucks bouncing off his legs and into the net are going to unlock his scoring touch, well that just confirms that his brain is smooth like a half melted piece of ice.

However, I have done Colliton’s job for him (someone has to) and developed a solution to this that is quite simple – swap Top Cat and Kirby Dach‘s respective roles on the PP1 and PP2 units. Put Dach on PP1 with Kane, Toews, Kubbly, and Keith, and let him park his big ass in front of the net where his size is actually useful but he still has the skill to actually make something of it. Then put DeBrincat on PP2 with Saad, Strome, Boqvist and whoever else, and let him work a half wall where is actually a legitimate threat with his quick release. Yes, I know this is too logical for Coach Gemstone, but that doesn’t mean it isn’t brilliant. You know it is.

– Overall, despite the itchiness of the third period, this was an encouraging performance from the Hawks against a team that is more than likely to be in the playoffs. Now all they have to do is string 10-12 more performances like this over their final 15 games. Easy enough, right?

– Hawks go next tomorrow night in Detroit, which should be a layup win. In some ways, that could be the real litmus test here – if they lose that one, you know they’re pretenders and should just pack it in for the draft pick. But winning, while it should be expected, would still mean they can be in because they are at least completing the bare minimum task of actually beating the teams they should. Until then.