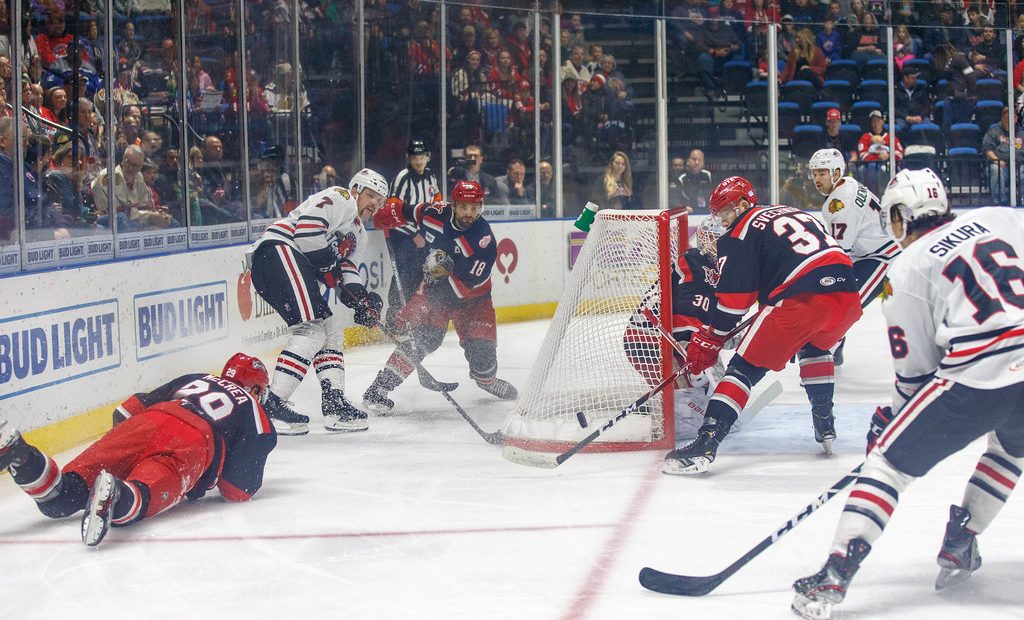 The Rockford IceHogs are about to begin a three-game weekend with big-time playoff implications. Chicago’s AHL affiliate kicks things off with a home-and-home with Grand Rapids before paying a visit to Rosemont and the Chicago Wolves.

Here’s a quick look at what’s waiting for the IceHogs this weekend.

Both the Griffins and Wolves are ahead of Rockford in the Central Division standings. The Hogs have split the season series with Grand Rapids. Their rivals from Michigan have taken ten points out of the first eight games between the teams, compared to Rockford’s eight.

Both teams have won twice on the road in the season series, though in recent years the trend has favored the home team in the rivalry. Over the last five seasons, Rockford is 15-8 against the Griffins at the BMO Harris Bank Center. Grand Rapids owns a 15-4-2-2 mark against the Hogs at Van Andel Arena.

Things get started in Rockford Friday night. A split just isn’t going to be good enough with the Griffins. The piglets need points in regulation, especially against a team battling with them for the postseason.

Back on February 18, Grand Rapids beat the Hogs 2-1 in Rockford. Three of this season’s tilts have been decided by that score. The next two games should also be hotly contested.

Veteran Chris Terry is pacing the Griffins in scoring, with 20 goals and 30 assists on the season. Grand Rapids also gets offense from familiar faces like Matthew Ford (10 G, 16 A) and Matt Puempel (15 G, 22 A). Goalies Calvin Pickard and Pat Nagle have been excellent against Rockford, giving up just seven goals in five games between them.

Rockford enters the weekend with John Quenneville (13 G, 9 A) still out with a strained neck. Joseph Cramarossa’s phyiscal game would be a welcome addition to the Hogs lineup. However, he also may not be ready to play this weekend.

The big injury news comes with Rockford’s announcement Thursday that goalie Kevin Lankinen is finished for the season after undergoing shoulder surgery. Things may not have ended like Lankinen had hoped this year, but the net is still in the capable hands of Collin Delia and Matt Tomkins.

Could Delia play in three straight games this weekend? He’s been the primary man in goal since Lankinen left a February 13 game after the first period. It would probably make sense to use Tomkins on Saturday in Grand Rapids and give the net to Delia Friday and Sunday, when Rockford visits the Wolves.

Chicago has lost four straight, including Thursday’s 4-2 decision to Tucson. The Roadrunners are at Allstate Arena Saturday night before Rockford comes a calling on Sunday.

The Wolves have been a little undermanned of late. They did, however, knock off the Hogs 5-1 in Rosemont on February 23 and made the piglets look pretty bad in doing so. Rockford is 6-2 against Chicago this season. They can wrap up the vaunted Illinois Lottery Cup for the first time in three years with a win in any of the last four meetings with the Wolves.

What’s really important, of course, is overtaking Chicago in the standings. That means getting the job done Sunday afternoon.