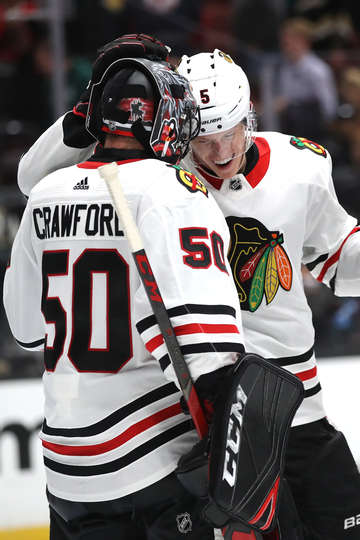 The last four minutes were a speedball that saw the four best players the Hawks have decide, “Enough of this bullshit.” But everything up to that point was a one-too-many-Vicodin full-body dry heave. The Ducks have won just five games in the last 10 weeks, and it took divine intervention for the Hawks to come away with two points. The Hawks looked like horseshit for 56 minutes, but because the Ducks are the living embodiment of a botched C-section, they got away with it. Let’s try to tidy this up.

– Corey Crawford is back, and he looked mostly good behind a blue line dead set on putting him back in the dark room. Twenty-nine saves on 32 shots in his first game back is something you’ll take, especially since, save for one bad play, he looked pretty good throughout. That one mistake was egregious, as he misplayed the puck behind the net, allowing Derek Grant (who?) to make a blind between-the-legs pass to Troy Terry (WHO?), who had a wide-open net to shoot on. Still, Crawford looked confident and spry, and he kept the Hawks in it despite their best efforts to throw it away. Plus he had an assist on Artie’s shorty.

– This might have been the worst game Duncan Keith has played since before the lockout. He was constantly out of position, and it was no more evident than on Anaheim’s second goal. With Seabrook covering Rowney on the near boards (which is questionable in itself), Keith—for no good reason—meandered into the same area. Rowney outmaneuvered Seabrook, causing a turnover on the boards. While the puck was loose, Ritchie laid a clean check on Seabrook, giving Rowney room to leak out Seabrook’s backside. Rather than sagging back down in front of the net where he should have been in the first place, Keith weakly stuck his stick into the Seabrook–Ritchie scrum, leaving both Rowney down low and Kessler up top plenty of room to embarrass him. You can blame Crawford for being overzealous on the poke check attempt, but you would be wrong. Keith’s miserable positioning left Rowney all alone for a slick redirect.

Things only got worse in the third. Keith got walked by Troy Terry, leading to a good chance that Seabrook had to break up with a slide. He had an awful clearing attempt, under very little pressure, that led to another great scoring chance for the Ducks. He was fortunate that Crow was up to the task, because if the Ducks weren’t a team that couldn’t successfully piss in the ocean, we could have been looking at a 5–2 final.

– Though Keith looked exceptionally bad, no one on the defense looked good at all. Dahlstrom and Murphy both had a CF% above 56, but it never really looked like that. Everyone was everywhere except where they were supposed to be, which makes Colliton’s claim that “These seven defensemen give us the best chance to win” even more maddening. Harju won’t solve everything, but after the last three games, and especially tonight, anyone who tells you Harju wouldn’t be a top-4 D-man on this team is a fucking cop.

– Artem Anisimov was noticeable tonight. On his shorthanded goal, he managed to outskate Cam Fowler, which should result in mandatory retirement for Fowler. He led all Hawks on the possession ledger (besides John Hayden, who had a better share but with fewer than 10 minutes played), because fuck all of us.

– Top Cat is a treasure. His power play snipe was a clinic. He took a pass from Gus between the blue line and top of the far-side circle. He took his time moving into the far-side circle, because the Ducks blow and didn’t even try to cover him, and picked his spot high stick side. His second goal was him being in the right place for a Toews pass, which he’s shown a penchant for since forever.

– Toews’s pass to Top Cat was special. He curled around from behind the net and threaded the puck between HAMPUS! HAMPUS! and Josh “Don’t Call Me Charlie” Manson. There are few people who can dominate the area behind the net like Toews.

– Perhaps the only Hawk better than Toews on and behind the goal line is Saad, when he wants to be. He’s been doing that thing where he puts his shoulder down, walks the goal line, and tries to stuff the puck in more often recently, and I’d like to subscribe to that newsletter. And of course, his pantsing of HAMPUS! HAMPUS! on Kane’s game-winning goal is the kind of stuff that made us all think he could be Hossa Jr. He’s having a nice year, and until the last four minutes, looked like the only Hawk who wasn’t exploring the vast reaches of space on the third hour of a boomers binge.

– Caggiula left the game with a concussion. Hopefully, he gets better fast.

The win was nice, as were the last four minutes. But this might have been the worst game the Hawks have played since the Old Man died. It was a sloppy sluice of slippery shit, even if the outcome was good (ALL PROCESS, NO PLAN). The defensive scheme is a zoo without cages, and the Hawks have proven that they can’t outscore those woes against real teams. Enjoy the comeback, but this isn’t sustainable. This is a shitty team that just has a few Hall of Famers on it, so they’ll tread water for a little while. But tonight reinforces the refrain we’ve been singing all year: Whether in free agency or by trade, the Hawks need real defensemen to supplement Murphy and Harju next year. Anything less is malfeasance.

Line of the Night: “Fans might get impatient with him, but Seabrook is underpaid for all the things he brings to the dressing room.” –Patrick Kane, future NHL GM, according to whichever bozo was doing the national broadcast