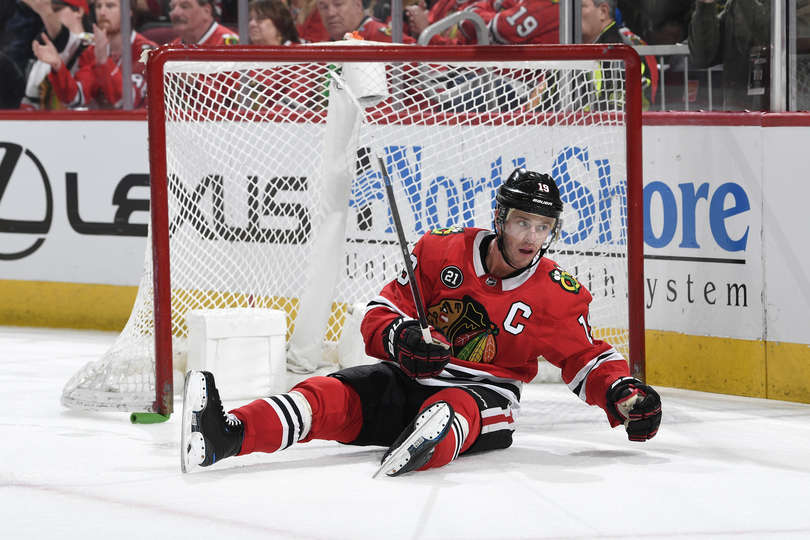 The Hawks controlled play almost all game. They had the Avs on their heels for most of it. They had one player below 50% in the possession share (Sikura). It was one of the better games they’ve played recently, and that stupid goddamn motherfucking woman-beating piece of shit asshole goalie the Avs had made it worth nothing. Goddamnit. Let’s do this fucking thing.

– Let’s start with the play that changed it all. Slater Koekkoek channeled his inner Fernando Pisani and handed the game away. The Hawks had managed to maintain pressure in the zone and force a turnover to keep the pressure on, and Koekkoek, under no pressure, just threw the pass away. The idea wasn’t bad: He had Kahun open across the ice, and if he hadn’t passed it directly to Patrik Nemeth, Kahun might have had a shot at a wide-open net. But Koekkoek couldn’t execute, despite having no pressure on him whatsoever.

There’s no excuse for what happened. Yeah, the idea was fine, but when you’ve got enough time to watch two drops of pitch fall to make a pass, you just can’t miss it by as much as Koekkoek did. It was a terrible, terrible excuse for a pass from a guy who’s paid to be an NHL-caliber D-man. I seriously hope Seabrook gets healthy soon, because that’s how done I am with this guy.

– Despite the outcome, this was one of the best games the Hawks played. They were aggressive and controlled the pace throughout. They had a 58+ CF%, and only Sikura was on the negative side of the ledger, which is weird, because he looked good early. After taking the lead in the first, the Avs were happy to pack it in as much as possible, and it ended up working. If you’re a believer in karma, this is it, because the Hawks have won a few games they probably shouldn’t have recently. But once again, their defense let them down.

– Delia’s first two goals weren’t on him. They were on Duncan Keith. On the first, Keith skated out way too far to cover Kerfoot, which left the middle of the ice wide open for Soderberg’s first goal. It didn’t help that Gus got hypnotized by Andrighetto on what was a developing 4-on-2, but Keith’s angle was the main culprit. On the second goal, which was on the PK, Keith somehow ended up outside of the far-side dot for reasons unknown to anyone. That left Murphy alone in front against three skaters, including Compher, who potted the shot no problem.

The third goal was on Delia. Toews did turn the puck over, but he and Jokiharju recovered well enough on Landeskog. Delia found himself angled way too tightly on the near post (relative to Landeskog), and Landeskog went over his shoulder on the far side. I want to be mad at him, but Landeskog is an excellent shooter and Delia is still a rookie. That’s one he has to have though. And you would have liked to see him stuff Soderberg on the backbreaker.

– With Seabrook and Dahlstrom out, Colliton had no choice but to start Jokiharju. Harju only had about nine minutes at 5v5, but he still posted a 62.5 CF%. I’m not sure what it is that Colliton doesn’t like about him yet, but it’s getting old fast. It’s not quite the bullshit that Quenneville pulled on Murphy last year, but it’s getting there. Harju didn’t look out of place out there, even if he didn’t really stand out either. But he sure as shit didn’t make any plays like the one Koekkoek made, so what’s it gonna take to give the guy who deserves the spot that fucking spot already?

– Garbage Dick had himself another game, pushing his scoring streak to 20 games. That creep really can roll, but I can’t help but wonder whether the Hawks leaned on him too much late in this one. I know that sounds stupid, given how good he’s been, but hear me out. Early in the third, the Hawks had two almost-consecutive power plays. On the first and for half of the second, the Hawks stepped back and waited for Kane to try to enter the zone just about every time. The Avs would collapse on him early, forcing a pass, and leading to a clear.

Late in the second power play in the third period, instead of taking it himself, Kane passed to Top Cat before hitting the blue line, which jostled the Avs’s PK. Within 15 seconds, the Hawks had tied the game. By using his release value, Kane managed to open up more space than he could Carmelo’ing. Kane may want to do it all, but he’s got enough offensive talent around him that he doesn’t have to do literally everything. Still, he’s the best player on the Hawks right now by far, so I get it.

– Dylan Strome was excellent tonight. The metrics were great (63+ CF%, 8.64 CF% Rel). He scored a game-tying goal off an end-board bank shot from Gus (who sucked out loud most of the night). He would have had two had he not janked a shot off the post while shooting at a yawning net in the first. He nearly had a highlight reel assist in the second, laying out for a DeBrincat pass and sweeping it, from his belly, to a crashing Kahun, who got stuffed by that ovarian cyst that is Semyon Varlamov. He is without a doubt the #2 center the Hawks have been looking for since Sharp decided he was too pretty to play center anymore.

– The Hawks’s second goal at the end of the second might be the best one I’ve seen all year, and it was all because Jonathan Toews simply decided it was time to fuck. After gathering the puck in the corner, Toews powered from the near boards to the slot with overwhelming power puck handling. His initial shot was blocked, but he recovered and beamed a pass through the slot to a waiting Kane, who could have written a dissertation on Karl Hungus’s role in Logjammin’ with all the time he had to take the shot. This year has been a relief to watch in one sense, as Toews is certainly back to being Toews.

This is a heartbreaking loss, because it’s a game they should have won. It’s also a game that shows how desperately the Hawks need to pursue Karlsson, Dougie, or HAMPUS! HAMPUS! this offseason. If they can scratch one out against the Stars, we’ll be right back to where we were before this game started: anxious and far too sober to handle it.

Oh, and fuck Jimmy Buffett and his stupid goddamn boomer music. Whoever decided to make a night out of celebrating the aural horror he calls a career should be caned.

Line of the Night: “Matt Calvert’s legs and heart made that happen.” –Marc Moser, doing his best Mike Milbury impression.