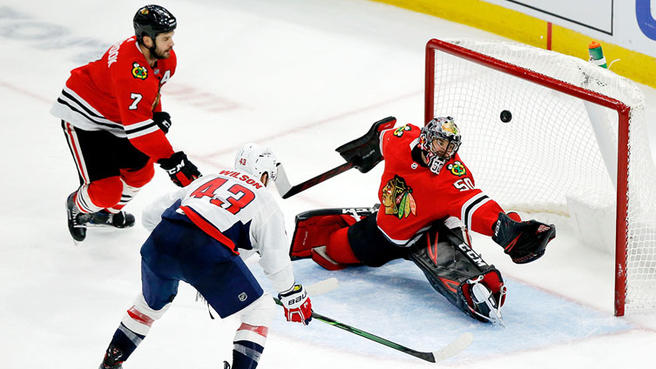 My biggest concern for the Hawks going into this season was that they might end up having a good forward group and good goaltending undone by a terrible blue line. Tonight, that was absolutely the case, with a little help from Braden Holtby playing well for the first time this year. The Hawks pretty much dominated this game to the tune of a 59.81 CF% and a 44-30 shot on goal advantage, and yet it still came down to a few key saves by Holtby and a few terrible plays from the Hawks blue line. It’s my first time this year, so let’s get back it in style:

– Brace yourself for this one: Alex Nylander was quite good tonight. In fact, two of the Hawks’ three goals were the direct results of him making some kind of very good play. One of them was even a very good play in his defensive zone! I KNOW! I was shocked too! On the Hawks first goal, Nylander did a nice job getting to the front of the net where the puck found him before he made a beautiful no-look, backhand pass to a wide open Drake Caggiula who was waiting in the slot with a fucking soccer net to shoot at, and accordingly did not miss.

The second great play from Nyland led to the Hawks’ third goal, as he stepped up very nicely onto a cross-ice pass near the Hawks’ blue line and intercepted it, then quickly got it to Kane and transitioned them into a two-on-one. Nylander caught up quickly and opened himself up, but Kane decided to shoot (Feather talked about this having been a thing a few times last week even, and it continued here) and found the net to draw the Hawks even. Overall, Nylander finished the night with a 53.57 CF%, which was well below team rate, but when the Hawks dominate possession like they did tonight it feels like splitting hairs to pick on that part and ignore that 53.57% is very good.

– On the other end of the spectrum, I am truly not sure what it is that Erik Gustafsson is still doing on this roster. We’ve talked about it time and time again, but the Hawks really should have traded him either at the trade deadline last year or certainly at the draft. At this point, he isn’t even good at the things he is supposed to be good at. The Hawks gave up a shorthanded goal tonight (more on that in a moment) that only game together because Gus tossed Kane a hand-grenade pass across the ice – Kane literally had to settle it with his hands – which forced him to flounder with the puck and turned into a 2-on-1 for Washington, which Gus defended like absolute shit and the Caps scored.

Then in the final minute, Colliton called his timeout to draw up a play after an icing, and he had to literally draw up a a faceoff play that did not involve Gustafsson because he can’t even receive the puck off the draws. And then after that play, when Gus did get the puck, he lost it and shortly after the puck went 200-feet the other way for the Caps final goal.

At this point, there is no excuse to not have Adam Boqvist here playing the Gustafsson role. Boqvist almost undeniably does the offensive part of “offensive defenseman” better than Gus, is probably a wash at worst in the defensive zone, and at least if he played like this you could understand it given that he’s 19. Gustafsson is 27. Get him gone.

– Not sure what happened over the summer, perhaps the Magic Training Camp undid it, but the Hawks power play is back to sucking big time, and it looks mysteriously a lot like how it looked when Q was here. Fixing the PP was one of the few things Colliton really had to hang his hat on last year, so to have it fall apart like this is not exactly good for him.

– Speaking of the power play, and circling back to that shorthanded goal, it is impressively bad that the Hawks went into a four-minute double-minor power play in a 1-1 tie and came out of it down 2-1. I would like someone to find out how many times a team has gone into a 4-min PP tied and come out of it losing. It cannot be that many.

– Yes he got knocked over, but Brent Seabrook watching the Caps score a goal from the goalmouth while he is sitting on his ass in front was a work of art sculpted by the hockey gods themsevles. It was truly impressive.

– I am a big fan of the Saad-Kampf-Kubalik line. Keep them going.

– Kirby Dach did not jump off the ice tonight, but he played well. In the first period he won a really nice battle in the corner before setting Kane up with a beautiful scoring chance. He didn’t do a whole lot else in the game honestly, but at least he wasn’t awful. I will keep coming back for more.

Also, to #18 of Washington whose name I choose not to look up, if you ever hook that boy by the face again I will hunt you down, find you, and kill you. Thanks.

– Hawks go next on Tuesday against Vegas. Until then.