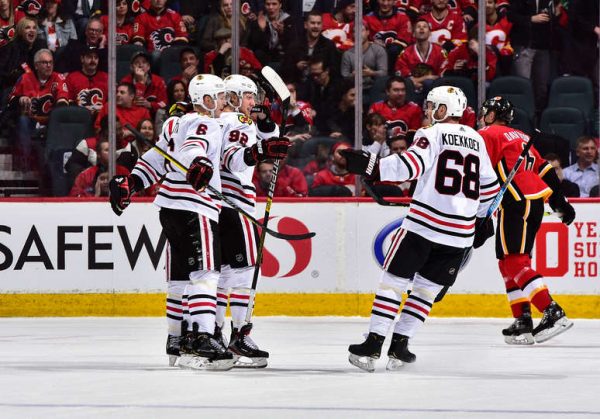 You may have been surprised when you woke up and saw the Hawks score from last night (because I’m fairly confident you weren’t staying up late to see it–only losers like myself, Sam, Matt, and about four other cretins would actually spend a Saturday night that way). And you probably thought, wow, maybe some shaky defense but that’s a dominant offensive performance. The thing is, though, it wasn’t. The score doesn’t really reflect the game itself, but please understand I’m not complaining. I’m just scratching my head, and have been for over 12 hours now. I suppose that after getting shut out on a bazillion shots by Vancouver, a correction was due and boy did it happen. But it didn’t inspire the confidence that you would think an 8-goal performance would. Let’s break it down:

–The first period was all Jonathan Toews, and honestly I’m here for it. He scored 30 seconds into the game, on the first shot on goal, which should tell you how the night went for David Rittich. Not long after that, Toews made smart plays behind the net to hold onto the puck on the power play, and fired a perfect pass to Dominik Kubalik for the second goal. The captain was even busting out the Patrick Kane spin-o-rama move. And that was all fine and good. The bizarro nature of the game was already happening early on, though, with the Hawks ending the period up in shots (12-8) and possession (52 CF% at evens), and yet tied in goals and it felt downright shaky at times. Also strange (well, it’s kind of normal now but it SHOULD be strange) is their special teams–in the first period they were dominant on the penalty kill, and thank christ for that. However just moments later when the Flames pulled a Hawks and took a too many men penalty, the Hawks couldn’t even get out of their own zone, much less get INTO the offensive zone to do anything. It was, as I kept calling it on Twitter, confounding.

–And then the second period happened and I’m still confused. The Hawks were not good, not by any stretch. Calgary lapped them in shots (14-7 in favor of the Flames), and the Hawks managed just a 38 CF%, but they scored 4 goals in the period. Two of those were from Alex Nylander so what the fuck is that about? The first one from Brandon Saad was off a gorgeous no-look pass from Patrick Kane, so it was lucky in that the Hawks finally got control of the puck for a few seconds, and since Kane and Saad are both good, they took advantage. That’s sort of how the rest could be explained too, I guess. The few moments when the Hawks could hang onto the puck, they scored. There ya go, people, there’s some quality analysis for you. But in all seriousness, Nylander’s first goal was off a steal, perfectly executed in the middle of the ice, Alex DeBrincat‘s (yay for this guy finally!) was thanks to Dach’s work behind the net and a quick passing sequence from Dach to Strome to DeBrincat, and Nylander’s other one…whatever. They just exploded with a handful of really good plays, while otherwise they were chasing and running around like rabid raccoons and getting skulled in possession.

–So all that offensive production is great, but they also conceded a few, right? Unfortunately 50% of the goals given up can be laid squarely on Adam Boqvist, who did not have a good night at all. On both Sam Bennett s and Elias Lindholm‘s first goals, Boqvist just didn’t pick up his man and left Lehner totally exposed. The offense made up for the shitty defense so it was fine, and as we’ve said, Boqvist is going to have mistakes, but it still wasn’t a confidence builder.

–And then, to top it all off, the Hawks still sucked in the third and yet piled on more goals. The weirdness just didn’t stop. In fact, when Lindholm scored his second goal, on the power play about five minutes into the third, everyone was palpably nervous that the Hawks were going to blow it. I think the team themselves expected to blow it, given the fact they got outplayed in every way except the one that counts. The Flames outshot the Hawks 20-9 in the third. Please think about that–it’s more than double the amount of shots the Hawks had, and mind you, that’s following the second where they were equally terrible. The difference of course was Robin Lehner, who, up until the third didn’t actually look that great but he turned it on when he had to. As mentioned, his defense wasn’t doing him a lot of favors, but he was giving up a lot of rebounds and his positioning wasn’t too solid through two. He figured it out for the third, though, and definitely bailed the Hawks, until Kane’s empty netter put the game away.

–The Flames really should be kicking themselves in the ass for this one, because not only did they totally outshoot the Hawks on a night when our goalie wasn’t actually lights-out the whole time, the Flames also had three power plays in the third period and still managed to lose. Also Matthew Tkachuk is awful and made about 50 bad turnovers, so that was entertaining. Rittich got pulled in the second and rightfully so, but Cam Talbot wasn’t any good either (a .692 SV%, lmao).

So it was all very strange, but it wasn’t boring. And if the Air Raid Offense is the best we can muster because our defense sucks, so be it. (Let it also be known that Erik Gustafsson still sucks and Boqvist is not the only defenseman who wasn’t at the top of his game.) Onto Winnipeg tonight, where it’s once again a “must-win” if you’re still deluding yourself that this team has a chance at the playoffs. Onward and upward!