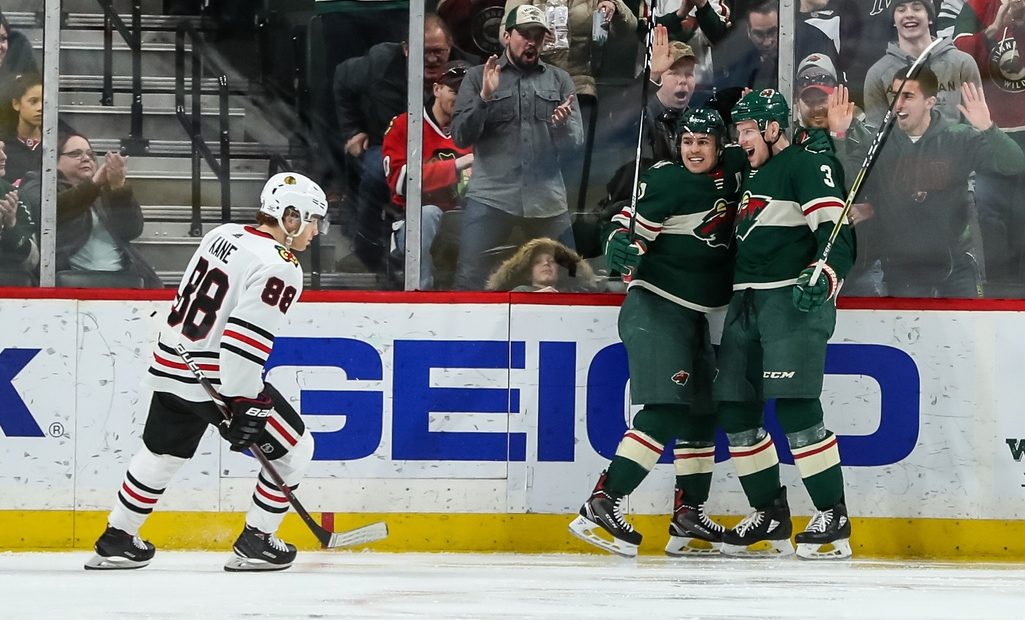 Hey, the bottom-feeding Coyotes came back against the Wild and erased a 3-goal lead, maybe the Hawks could do it too? Hahaha, that’s adorable. To the bullets:

–It’s a familiar tune, but tonight the Hawks could. not. finish. They destroyed the Wild in shots (in just the first they led 17-5), ending the game with a mind-numbing 44 to the Wild’s 19. If only this were the number that mattered. Whether it was Toews in the first fumbling a point-blank shot, Our Cousin Vinny missing on a one-timer off a Kampf faceoff win in the second, or Kampf later that same period whiffing on a backhand on an open net, none of the Hawks could capitalize on any of the chances they had. In the third period they had a 91.7 CF% and yet did not score. They finished with eight high-danger chances, which isn’t a crazy high number, but it’s still a decently sized handful of good chances they choked on.

–Which leads to a related point: Devan Dubnyk had a damn good game. A lot of the Hawks’ mistakes were missing the net or just plain fucking up, but when a guy faces 44 shots and gets a shutout, you gotta tip your cap.

–Foley and Konroyd worked REALLY hard to convince us and themselves that the Hawks played well in the first, but that’s not exactly accurate. Yes, they led in shots and they were well ahead in possession, but they did jack shit with two minutes of a 5-on-3, after Marcus Foligno picked a fight with Lance Bouma in a show of sheer uselessness and stupidity. We all know the power play sucks, but at that point the game was still, well, a game, and a goal would have tied it at one. Blowing those types of opportunities is what this season has been all about, and while of course we don’t know what would have transpired even if the Hawks had scored there, they could at the very least have ended the first down by one instead of two. It may have ended tied. Either way, their incompetence on special teams was extra egregious tonight. Another example (in case you needed one): in the second while on the power play for Cullen’s hook on Kampf, the Wild started a 2-on-1 against Oesterle and Nick Schmaltz busted his ass in a sort-of backcheck which broke up the developing disaster. That was literally the best play they had on that man advantage.

–Oh, and Glass Jeff sucked. I get it that after Forsberg let in that Pitlick goal that Q was all too happy to bench his ass, but Glass gave up three goals on 19 shots. That equals out to a stellar .842 SV%. But tell me again about what a great story he is, and also let’s destroy any remaining confidence Forsberg may have had by punishing him for a stupid mistake.

–So Carl Dahlstrom started in his first NHL game, and at this point I’m all for getting a young defenseman some experience. But not at the expense of Michal Kempny for fuck’s sake. With Rutta being out they could have played Murphy with Keith, or Kempny with Keith and let Murphy babysit Oesterle, or they could have sat Oesterle all together and replaced him with Dahlstrom; there were so many other options! Dahlstrom ended the night with a 54.5 CF% and wasn’t particularly good or bad either way (understandable), but Oesterle was generally worthless. He truly can’t do shit QB’ing a power play. Q’s infatuation with and confidence in this guy—as opposed to his disdain for both Kempny and Murphy—is reaching TVR status. It’s not quite there yet, but it’s close.

–At one point Lance Bouma was on a line with Kane. That should tell you all you need to know about the misplaced priorities of this coaching staff and the quality of play right now. Bouma proved he could be a punching bag for a moron and since he didn’t start crying he gets to play on the second line? Yeah, that’s what this team needs to turn things around.

I’m not gonna tell you that NOW IS THE TIME that the Hawks have to start winning if they’re going to have a shot at the playoffs, because we all know that time has passed and where this season is going. It was a frustrating night just on its own—we don’t need to pile on unrealistic expectations too and decry how it didn’t meet them. It wasn’t going to in the first place.