Game #55: Hawks 2, Jets 5 – Despite There Being No Airport in Winnipeg, The Blackhawks Crashed 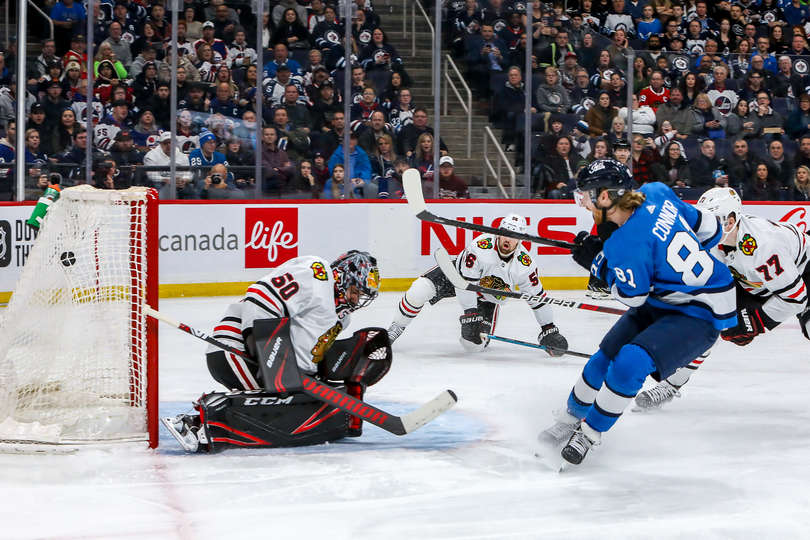 You guys, I’m telling you, I keep trying not to be too cynical/skeptical about this Blackhawks team. I keep wanting their little runs of success to be legitimate, wanting Coach Cool Youth Pastor’s system to finally be effective, wanting the blue line to overperform their on-paper skill, wanting Erik Gustafsson to just do one thing right in his own zone. And yet every time I think I may be getting what I want, the other shoe drops. Well tonight, that other shoe crashed down from the sky and landed hard in Winnipeg, though obviously not at an airport, because they don’t have one of those there. Let’s just get this over with:

– First and foremost, my biggest takeaway from tonight is this – I cannot remember the last time I saw Alex DeBrincat have a game this bad. There just were very few moments where he really stood out for doing anything extremely well, and he had far too many there he stood out for doing something extremely bad. Two of those in particular led to really dangerous scoring chances for the Jets, one of which resulted in them scoring a shorthanded goal. In a season full of bad luck and disappointment that hasn’t always been his fault, a night like this from Top Cat was tough to watch.

– Moving on, this was something of a wild ride to watch, because it almost felt like two different hockey games. The Blackhawks absolutely dominated the first period, to the tun of a 70.59 CF% at 5v5!!! That is NOT a typo! Things were looking up after that period, folks! And then that period ended, and then second period started, and then the Hawks got absolutely shellacked in possession in the second period, with a pathetic 41.67 CF%, and then again in the third with a 45.45%. They were getting overwhelmed constantly, and while they were able to generate 15 scoring chances in those two periods, only 5 of those were considered high danger. Otherwise, it just felt like the Jets were completely dominating the Hawks in the final 40, and the results obviously reflect that.

– On top of the lackluster performances in the final 40 minutes, the Hawks gave the Jets entirely too many power plays tonight. You simply cannot give an opponent 6 tries with the extra man and expect to win a game, especially on the road. And *especially* when your own power play is running around with its pants around its ankles.

– Yet again, we remind you that Corey Crawford is not appreciated nearly enough. While the Hawks really only lost this one by one goal (the Jets added two empty netters) they could’ve easily been down by three or four if not for the play of Crow, particularly in the second period. This man deserves to be treated as a legend by this organization and this fanbase.

– One more thing I am repeating for the umpteenth time: launch Erik Gustafsson into the sun!

– Hawks go next on Tuesday, against Connor McDavid and the Oilers, and guess what folks you have to deal with me for that one too. See ya then.