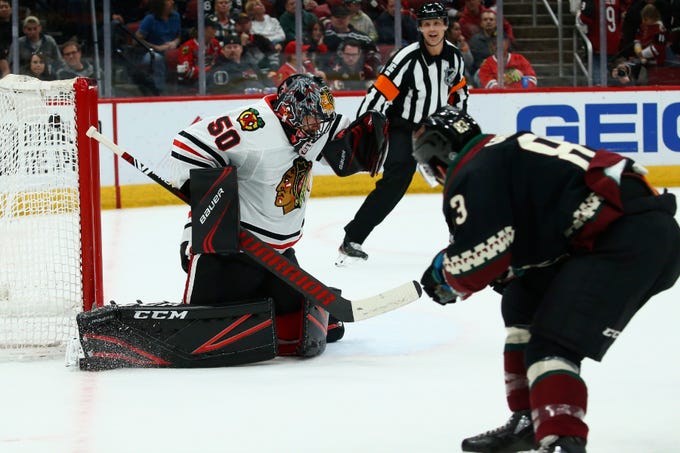 The urge is be disappointed that the Hawks couldn’t get this one in regulation. They worked through the rust pretty quickly, certainly created enough to win easily in regulation (though gave up enough to lose it too), had a two-goal lead, but still needed the carnival game to get the second point. But you can’t legislate for Antti Raanta playing like it was last year instead of this one. This is how the Hawks have to do it. Get it open, trade chances, and bank on their goalie outplaying the one at the other end. Most nights, pretty much every night, Crow’s performance would have been more than enough. He was matched tonight by Raanta, so you get a split decision win. It happens.

Considering where they stand and the tiebreaker being just regulation wins, the Hawks aren’t as bad as I thought so winning in extra time isn’t as disadvantageous as I thought, either. They’re within one or tied or up on reg. wins with just about everyone around them, which is a sad state of affairs in the West. Three points back of Arizona, with two games in hand. Can’t take their foot off the pedal, but at least it’s interesting.

-As you would expect, it took the Hawks five or 10 minutes to find their sea legs again, as they gave up way too many good chances and didn’t let Crawford breathe much. The xG for the period being .94 to .26 tells you pretty much everything. They were sloppy with the puck and couldn’t quite get that extra foot as they adjusted back to game pace. But hey, they survived it.

-The season isn’t totally about development, but there were big moments from both Dach and Boqvist tonight. The latter clowned Taylor Hall twice when one-on-one with him. He out the Hawks in trouble in the second by turning into trouble and just handing the puck over, but you take the good with the bad. On the power play just once I’d like to see him fake the drop pass and just steam into the zone and see what he can do with only three back there, but he’s probably under specific instructions. The important thing is the defensive game isn’t nearly as helpless as some would have you believe.

Dach created the second goal with more good work on the boards (which he’s been excellent at all season) and then the vision to find Kane who found Saad. That line was a threat all night and clearly Dach was relishing finally getting to play with some real talent. Let’s see a whole lot more of this.

-Drake Caggiula continues to be useful. You’ll know the Hawks are ready to do things that matter again when he’s on the third line permanently.

-On the flip side, it was something of a rough one for Toews. 40% Corsi, 41% xG, and haphazard with the puck all night. Capped it off with a lazy penalty late in the third which the Hawks can’t have.

-So, when we get down to 15 games left or so, or the end of the month, and if Crow continues to outplay Lehner as he has of late here, what will they do? We’ll save this question for later because we’re nowhere near there yet. Let’s just enjoy how good Crow has been of late.

-Maatta and Koekkoek were to blame for the second goal, as Fetch got absolutely done in by speed and then just kind of went out walkin’ after midnight somewhere else and Maatta wasn’t quick enough to come over. But then how could he be expecting Koekkoek to just wander off like Layne Staley used to do offstage? Anyway, they’ve been a solid enough third pairing, and sometimes your third pairing is going to fuck up. You live with it. It’s why they’re a third pairing. It was cute that it came right as Konroyd was extolling their play of late. That’s a motherfuck this whole blog can be proud of.

-God, Top Cat just can’t buy one right now, can he? He’ll binge soon, and you just have to hope the rest of the Hawks game doesn’t fall around it so it can result in more points.

-It’s fun to be in the race, but the Hawks have had to be this hot just to get within hailing distance. Which means they can’t stop.