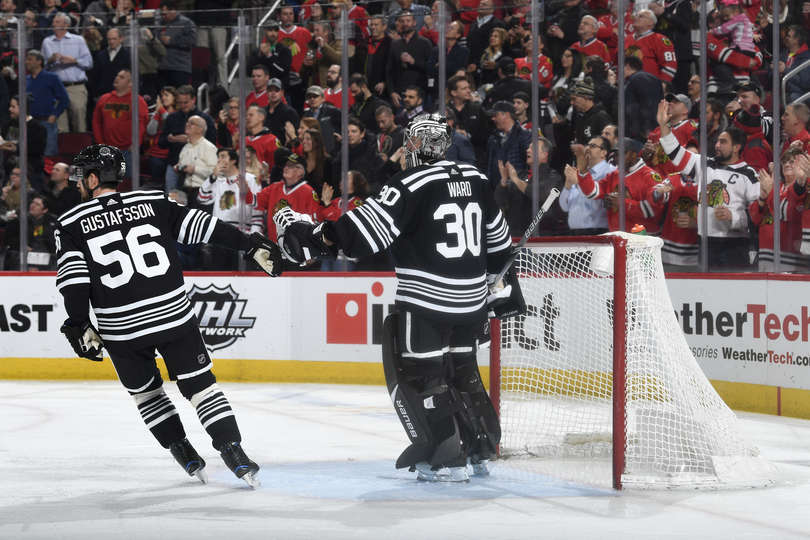 The Hawks get pantsed in the nerd stats but come away with a shootout win on the backs of the power play and Cam Ward. Just like we all predicted. To the bullets!

– Cam Ward had a mostly good game tonight. He let in his embarrassingly soft goal early but looked like an NHL-caliber goalie for the rest of the game. You’d be hard pressed to blame him for Barzal’s breakaway goal, given how obscenely good he is. You’d be forgiven for assuming he’d have his ass stuffed and mounted in the shootout—which continues to be both the dumbest and most exciting way to end a game around—but he did what he was supposed to do. And 33 saves on 35 shots, 15 of which were the high-danger variety, is a strong performance. The Fels Motherfuck is consistent and indiscriminate.

– The Islanders’s first goal was one of the strangest I’ve seen in a while. In the moment, it was like watching that big fucking fish eat you World 3 in Mario Bros. 3: It was slow and shouldn’t have happened, and yet. While Jokiharju took the initial blame for it, the whole fucking play was bananas. Just look:

This is a set play gone wrong. Anisimov wins the draw and Hayden starts to break out. The idea is for Jokiharju to retrieve the puck and pass it out to Hayden if possible, with Gustafsson as a release value. But Anisimov doesn’t win the puck cleanly, as it knocks off his left skate, slowing the puck down. Flippula then overpowers Anisimov, who manages to fail at getting in Filppula’s way. Watch Anisimov lean into Filppula in a way that allows Flippula to get around him. Anisimov’s only job after winning the faceoff is to keep Flippula away from the puck, and he doesn’t. With one fucking hand, Filppula gets around Artie, throws Harju off track, then stickhandles around Anisimov to backhand a soft goal.

Ward should have had it, but the main culprit on this play was Anisimov, not Harju. Harju was a bit slow on the uptake, but if Artie keeps Filppula off the puck and doesn’t get manhandled by a guy with one hand on his stick, none of that happens.

– The power play has scored in nine straight games, including two tonight. On the first, Kane magicked his way from the mid to high slot, feeding Strome on the goal line. Strome then did that thing that Toews used to do four years ago, crashing from the goal line and stuffing a shot past that standup-save chud Robin Lehner.

Kane didn’t get a point on the second PP goal, but he set that one up too. He hit Strome with a pass just below the goal line. Strome then belched it out to a waiting DeBrincat, who settled down the not-so-great pass, went backhand–forehand, and gave Toews a shot to bat the rebound out of mid-air.

– The Saad–Kampf–Kruger line was nails in possession tonight, with a respective 66.67, 61.54, and 57.69. Although I had stupid, stupid dreams about Saad scoring 90 this year (because I am stupid, you see), if Saad is going to carve out a strong 2nd/3rd wing spot, I won’t be terribly upset. Kampf is interesting, given his speed, defensive ability, and seemingly utter lack of scoring touch. He’s likely a faster version of Kruger 1.0, which is nice to have.

– On the other end, Keith–Seabrook looked putrid tonight. Each sported a 35+ CF% and CF% Rels of -17.87. Colliton can talk all day about how he wants to rotate younger guys to keep them from burning out or whatever other horseshit he wants to shovel to protect the apparently fragile egos of Keith and Seabrook. But until he scratches one or both of them after games like this, it’s going to be hard to take him seriously. I get that it’s not something he wants to broach, but be the fucking coach. If they’re going to suck together, break them up or give them less time. If they’re just going to suck regardless, fucking scratch them. It might be them who’s getting burned out.

– Erik Gustafsson was a snuff film in his own end. He had at least three unforced turnovers. But you know what? As long as he keeps putting up points and QB’ing the most dangerous power play in the league since mid-December, I do not give a fuck at all.

– Outside of the turnover that led to Barzal’s breakaway, which was admittedly bad, our Large Irish Son looked good tonight. He was much better away from Koekkoek, as I assume most defensemen are, but even dragging Koekkoek around, Murphy posted a 56+ CF%, best among Hawks defensemen by far. I’ll never understand people who says he sucks. I get being mad that Hjalmarsson is gone, but that doesn’t make Murphy shitty.

– Drake Caggiula isn’t a first liner, but Toews and Kane sure make him look like one. You can sort of see how he kinda fits as a fast puck retriever, and he looked especially good for a sequence in the first. But a lot of that is just the residue of Toews’s Renaissance and Kane’s Hart-worthy otherworldliness.

Not a bad way to go into the break here. We’re going to post a whole bunch of stuff that looks like the result of a boomers-and-blow binge during the bye, so we’ll see you there.

Line of the Night: “Pat, listen up because this is right up your alley: The Hawks are hosting a margarita night.” –Konroyd