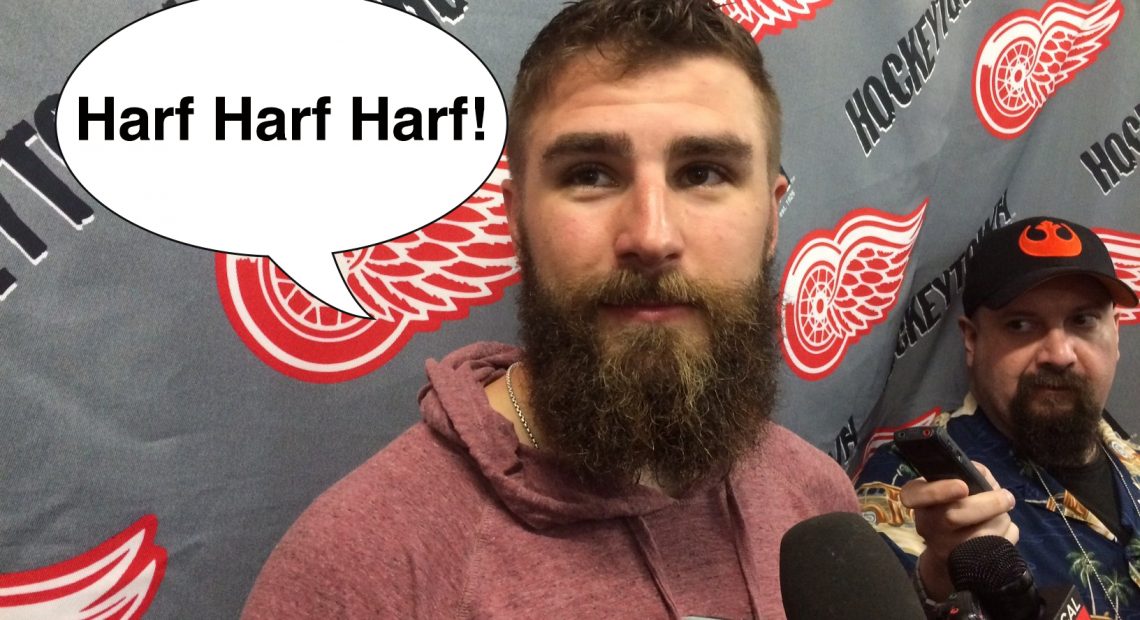 We couldn’t pick him out of a lineup. We had to check how to spell his name a couple times. Apparently, the Red Wings have some shaved ape they called up to play wing on occasion and his name is Luke Witkowski. He has 50 penalty minutes in 18 games. That makes him fourth in the league in penalty minutes per game, behind three real Aristotles in Derek Dorsett, Cody McLeod, and Michael Haley and just ahead another bridge troll Tom Wilson.

We’re trying to figure out why. We get it, you have to live in Detroit and and play on this terrible team and maybe you’re angry. But of course that’s never the story in hockey.

Witkowski has played parts of four seasons in the NHL, three in Tampa and this one in Motor City. And clearly he’s under the impression if he goes around measuring himself in a way that only truly stupid men measure themselves that’s the way he’ll stick. And it sure is doing the Red Wings a lot of good. They might have finished last instead of 6th without this kind of SANDPAPER.

Are Larkin and Mantha more protected because this dolt is on the bench? We’re guessing not because he’s played more than 10 minutes in a game exactly once out of his 18. And normally he’s in the three-minute range. So who does the help? Certainly not the other wingers who soak up his time and then jumble the lines.

Where else but this dumbass world would a player gain the outlook, and usually rightly so, that if he just takes enough fists to the face that he can stick in the top league? Would baseball let a reliever stick around because he threw at hitters who like, bat flipped one too many times? Maybe the NFL needs a gunner on a punt unit that also likes to try and rip guys heads off in the pile and after a whistle, but it’s unlikely. Guys like this get laughed out of the NBA.

What makes it funny is how counter it is to what used to be the Red Wings philosophy, who left this all behind when they were good. But now they suck, so they resort to this, we guess because they have nothing to lose. Remember when Don Cherry claimed that the Wings’ attendance woes was because they didn’t have a Kocur or Probert anymore? How we and they laughed. Was he right?

While it’s sad when someone’s dream dies, Witkowski clearly isn’t good enough to be in the NHL. That makes him like millions of others. So cast him out. This does no one any good.