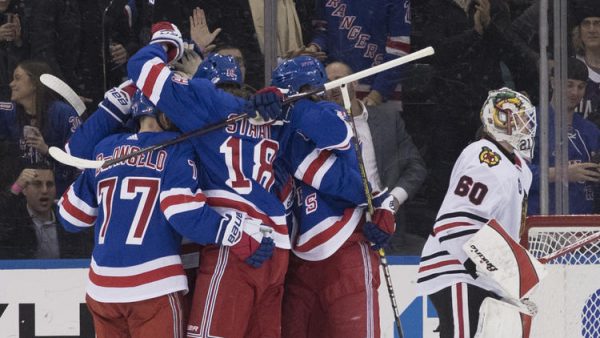 There’s really no denying it after this game: the Hawks are definitively the league’s bottom feeders. Yes, the Kings technically have fewer points (by one) but they also have two games in hand on the Hawks. Don’t kid yourself–they’re awful. Let’s just get to it:

– The Hawks played well for about the first four minutes of the game. After that, it was pretty much straight downhill. By the time that Brandon Saad scored the first goal on the power play around five minutes in, the Hawks had been dominating possession and showed good speed. That power play came just as they were losing their grip on things, and Saad took advantage of Henrik Lundqvist being too twitchy and leaving a wide open goal. But it was all Rangers after that, and even though the Hawks finished that period leading in possession (58.6 CF%), they still gave up goals to both Chytil and Zuccarello, and managed to be losing at the end of the period despite leading not only in possession but shots too.

– Did I mention it got worse after that? In the second period the Hawks were basically useless, with the low point coming when Duncan Keith carelessly handled a shitty pass from Saad, and moved the puck not away from the goal, not into the corner or to the boards, but directly into the middle of the slot where Chris Kreider calmly scored point blank on Delia. It was equal parts lazy and stupid. Technically the goal was unassisted—if only that were true. Keith should have had the primary assist on that one.

– In general it was a rough night for the defense (SHOCKING). Keith’s fuck-up was the worst example, but the Gustafsson-Jokiharju pairing had its problems too. They ended above water in possession but in the first period Gustafsson got squashed like a bug and with the resulting turnover, Filip Chytil de-pantsed Jokiharju for the first goal. Joker was on his off side at that point, basically out of necessity, but that should say something to Coach Cool Youth Pastor next time he thinks about flipping Jokiharju as he did when he paired him with Nachos the other night. Murphy and Dahlstrom were also chasing and watching as Zuccarello scored a few minutes later. It was team effort to suck tonight.

– On that note, Jonathan Toews took a leadership role at sucking. He had a wide open net at the end of the third when they had the extra attacker out, could have tied the game, and didn’t even hit the net. It made Kahun’s literal last-second goal even more painful since it would have been a game-winner.

– They got two more power play goals tonight, so yes it’s a relief that’s still happening. But unfortunately the movement wasn’t what we’ve been seeing lately, and had the Hawks been playing a good team, they probably wouldn’t have scored at least one of those goals.

– After coming out of the first period behind, and losing whatever momentum or give-a-shit-ness that they had, the Hawks were basically out of fucks to give entirely. They were bad in the second period but even worse in the third, managing only six shots and a 40 CF%. In a way I can’t blame them because it’s demoralizing to suck all the time. But even when they’ve sucked before they’ve at least been entertaining (the Flames game, the Predators game). Getting beat by a fellow crap team really took it out of them I guess.

There are 33 games left to go guys…wow, that sounds depressing when I say it out loud. Fortunately just a couple more until the All-Star break? Onward and upward?