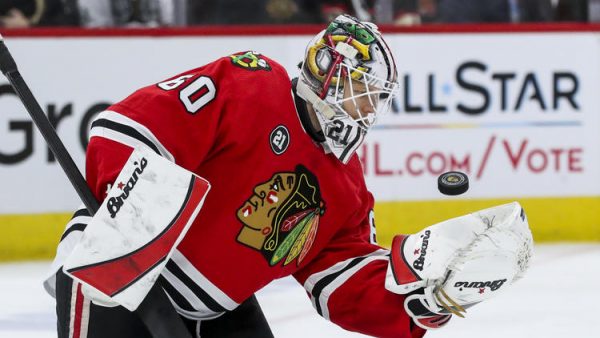 If you looked at the score and thought, “Four goals? DEY GOTTA START WARD MY FRENTS” let me just tell you to shove it right up your ass. Collin Delia played an exceptional game against one of the best teams in the league right now, and oh yeah one of those was an empty netter so I don’t want to hear any shit. To the bullets:

– This game was fast and entertaining. The first period had a combined 28 shots, and both goals were beauties. Gaudreau’s was the result of a defensive breakdown (SHOCKING) as Dahlstrom got mesmerized by a scrum in the crease and left Gaudreau alone with a wide open net. He made it look easy. So too did Patrick Kane near the end of the period. A quick pass from Anisimov at the blue line, Kane skated it in alone, and David Rittich let the backhand by him with barely even a wave of his arm. Both goals would have been prevented by better defensive play but both were damn enjoyable to watch.

– In the second, the Flames came out a little flat and the Hawks actually took advantage of this with yet another beautiful Kane-to-DeBrincat scoring play. Watching this, hell, writing this, makes me want to curl up in the fetal position while thinking of how Top Cat and Kane could be a permanent second line with Dylan Strome, but I’ve done enough agonizing over the decisions of Chicago coaches for one week, thank you very much.

– In addition to that goal in the second, the Hawks were leading in possession with a 67 CF% at the halfway mark of the period (I’m referring to the second period only; they actually were underwater in possession in the first). Delia made some solid saves and the Hawks were driving the play, until Dylan Strome took a penalty during the very power play he caused by drawing a penalty. Cosmic, no? Anyway, the 4-on-4 seemed to ignite the Flames (SEE WHAT I DID THERE) and Monahan tied it up a few minutes later on yet another penalty, this one by Gustafsson.

– Despite that penalty, Erik “Scoring Machine” Gustafsson continued his point streak tonight with two assists, bringing it to six games with at least a point. He had a 56.8 CF% to boot, so if it weren’t for that dumb penalty I’d have actual nice things to say about him.

– OK, let’s talk about Collin Delia. He finished with a .929 SV% and he faced 42 shots, 18 of which came in the third. The first goal was, as already mentioned, the result of his defenders leaving one of the best players in the league with the entire net to himself and about 15 minutes to sit there thinking about scoring. The second goal was a power play goal, and it took multiple tries for Tkachuk and Monahan to elevate it past Delia, because when they tried their point-blank passing play and shot, Delia was in the perfect position and made the save. The third goal was the result of the shittiest change possible when three Hawks just ignored Gaudreau AGAIN and left him literally at center ice, alone, with the puck. None of these can be pinned on Delia because to get it past him the Flames had to be at their very best. And had it not been for Delia, this easily could have been 7-3. I’m happy to see Delia look calm under pressure and clearly be able to handle a barrage of shots thanks to this Swiss cheese they call a defense. But listening to Jamal Mayers and Steve Konroyd in the pre-game talk about how the “hot hand” should play, and how it really should be Ward if this weren’t the second night of a back-to-back, is just mind-numbingly infuriating.

– OK, enough of that. God damn the Flames’ top line is dominant. Not only did Johnny Gaudreau score twice, and seemingly at will because for some reason the Blackhawks kept ignoring him or pretending he wasn’t real, but he, Monahan and Lindholm had an 81 CF%. This isn’t news; I just had to say it.

– Brandon Saad was nearly having a minor resurgence of the bad old days where he couldn’t score to save his life. How he didn’t score on the open net in the second I’ll never understand, although credit to Sam Bennett who poked the puck away from Saad, and Rasmus Andersson who tied him up just long enough to deny him the rebound opportunity. He got the third goal with seconds to spare in the game, which unfortunately was pointless, but there is nothing to panic about with Saad.

– David Kampf hit the god damn post. Sometimes I marvel at the synchronicity of the universe but in this case I’ve had just about enough.

– The Hawks’ resurgent power play? Nonexistent tonight. It in fact did revert to the bad old days. I’ll leave it at that.

– Brandon Davidson had a couple nice plays tonight, including a nice stretch pass to Kane and preventing yet another shot on goal as Delia was getting pummeled in the third. It almost made me feel bad that we’ll never see him again once Jokiharju gets back from partying with the Juniors team.

It’s annoying that the Hawks blew a lead and couldn’t even salvage one point, but the Flames are a genuinely good team so that’s just the world we live in. We got another one in just 48 hours…onward and upward.