Game #44 – Jets vs. Hawks: Spotlight – Hellebuyck, Carry This Baggage Out 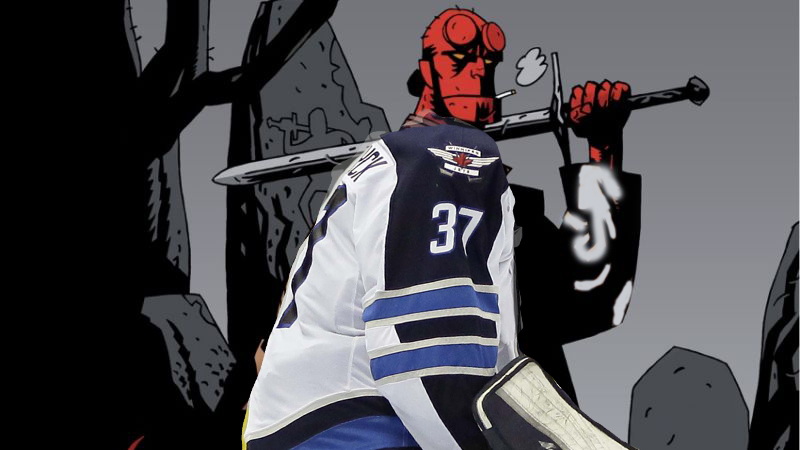 You may feel like you’ve heard Connor Hellebuyck’s name forever now. Some of that is the bloated coverage that Canadian teams get, combined with the vision that Hellebuyck was going to be the final piece to get the Jets over after years of falling short. It didn’t work out that way until this season, with Hellebuyck top 10 in wins, save-percentage, and goals-against. There might be a feeling of, “IT’S ABOUT TIME” with Hellebuyck. But when you look at it, he’s actually come to the fore much quicker than most goalies do.

One of the more perplexing aspects of watching the NHL and how teams are run these days is how it’s pretty clear that no team really understands goalies at the point. There doesn’t seem to be a common theory or process on developing them like there are in other positions. Of the current top goalies by save-percentage, five came from Europe (Vasilevskiy, Bobrovsky, Lundqvist, Rinne, and Andersen). three came up through college teams (Hellebuyck, Quick, and Gibson) and two from juniors (Crawford and Mike Smith). And generally, that’s how it goes. Most from Europe, some from here but no tried and true factory.

We can kind of conclude that coming through college is probably the least likely way to produce a goalie. Starting in 2010, here are the goalies who finished top ten in the nation in save-percentage in an NCAA season and played an NHL game: Ben Scrivens, Carter Hutton, Cam Talbot, Hellebuyck, Aaron Dell. That’s it. Real murderers row, huh?

The list expands beyond that. Tuukka Rask had two seasons in the AHL and three seasons either backing up or splitting starts with Tim Thomas. Cary Price needed three to five seasons in Montreal before he became CAREY PRICE, as you may remember there were a good deal of Habs fans that wanted him shipped out instead of Jaroslav Halak (never let it be said that Habs fans know any more than your average lamppost about hockey, even if they speak French). Price is just about as pedigreed as you can get coming into the league as well.  Only Jonathan Quick took less than the five years as a pro before becoming a bonafide starter, and we can have the how-good-actually-is-Quick debate all day.

It may just be that goalies take longer to become ready for the rigors of starting in the NHL than anywhere else. After all, they’re the only players out there for 60 minutes, and they’re the only ones whose mistakes or brilliance decide the outcomes of games alone. Teams that draft goalies, whatever round, probably should know they’re going to have to spend four to five years with their minor league team or backing up an incumbent before they can turn things over to them. You might be seeing that with Malcolm Subban in Vegas now.

Goalies are probably the closest to baseball pitching prospects. Other than the truly special, you better be patient and hope nothing goes wrong.