Game #42 – Starch and Parchment Laid the Laws When Bishops Took the Ride Only to Deceive – Bruins 4, Hawks 2 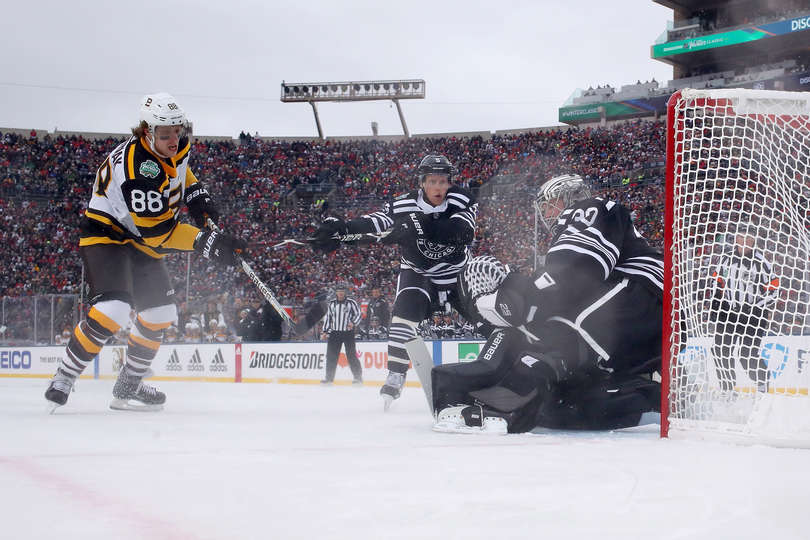 Another Winter Classic, another loss for the Hawks. The Hawks played decently for the most part, which makes this loss a bit more frustrating than usual, but you can’t put Boston on the power play and expect them not to score. Still, there’s some good to take from this game. Let’s do the bullets.

– After my total psychotic breakdown about Cam Ward starting, Cam Ward was probably the best Hawk on the ice today. None of the goals he gave up were goals he had a chance on. The first was the result of a bad clearing attempt by Kruger after a weak and off-balance pass from Dahlstrom. Bergeron just picked Kruger’s pocket at the point and swept a pass to a wide open Pastrnak, past an off-kilter Dahlstrom. The second came off an unfortunate deflection off Seabrook’s skate on the PK. With Pastrnak trying to thread a pass to DeBrusk in the blue paint, the puck ricocheted off Seabrook’s skate and directly to Bergeron in the slot. The third was a result of Gustav Forsling being a giant bag of ass. It’s clear that the predictive success of Fels Motherfuck is directly proportional to how red and nude we get toward the person we’re motherfucking, because Ward was really, really good today.

– Brendan Perlini and Dylan “Stop Fucking Calling Me Tyler, Eddie” Sikura looked great early on. Perlini’s goal while open in the slot was a relief, and the way it got set up was really fun to watch. Dahlstrom was on the far boards with the puck and fell down, only to recover and tip the puck to Kampf. Kampf pushed it to Sikura who shot it wide left. Krejci tried to corral it behind the net, only to run into Kampf, who stole it away and fed a perfect pass to Perlini. Perlini saw a whole lot less time later in the game, and it’s hard to understand why, given how noticeable he was early.

– Jonathan Toews had himself a nice game. You can trace Kahun’s goal in the second to Toews’s effort behind the net. After getting tripped, Toews recovered quickly and shoved a strong pass from behind the net to Gus at the point. Gus’s point shot ended up behind Rask thanks to Kahun’s high-slot tip, but none of it happens without Toews showing off some Old Man Strength. He also hit the post late in the third, coming just inches away from tying it up.

– David Kampf had a good game throughout as well. His steal and pass to Perlini in the first was high art, and he had an exceptional break up at center ice with the Bruins on a 5-on-3 PP in the third. The fancy stats don’t flesh it out, but Kampf looked to be in all the right places at all the right times.

– You could not say the same about Gustav Forsling. The game-winning goal was a clinic in why we think Forsling sucks. First, he failed to clear the puck because he was busy getting smashed into the glass by Chris Wagner. He struggled to recover, which put the Blackhawks way out of position up top, forcing Martinsen to try to traverse the length of the ice to cover the far side. Once Forsling finally got to the area code where he should have been, Kuraly simply beat him to the rebound.

You’d be less upset about this if Forsling were delivering the puck movement and offense he’s supposed to provide, but he doesn’t even do that. He was directly responsible for suffocating two Hawks drives because of poor shot choices. If he’s not delivering offense and he clearly sucks on defense, what is it he does here?

– We’ve all had enough of Artie, whether on the second line or in general. His trip led to Boston’s first PP goal, and he couldn’t keep up with play at all. He and Keith brought up the rear with a 41+ CF% in a game in which the Hawks controlled possession with a 55% share.

– That Weezer song about ride-sharing is worse than I could have imagined.

The Hawks put together a decent effort, but they couldn’t overcome the Marchand–Bergeron–Pastrnak line. It’s hard to be mad about this loss, considering how much worse it could have been. It’s over now, and God willing we’ll never have to do another Notre Dame tilt again.

Booze du Jour: Cruse champagne (they were out of Andre)

Line of the Night: “Anisimov, not moving his feet.” – Pierre, stating the obvious