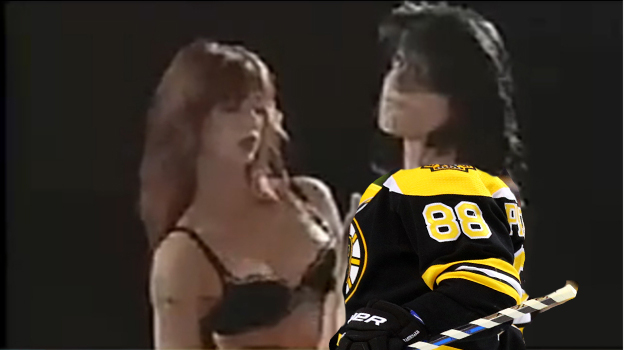 We have a working theory around the lab, we’ve kicked it around for years. While some will tell you that Brad Marchand in the best left wing in the game, we tend to think he’s pretty much a product of getting to play with the best two-way center in the game in Patrice Bergeron his entire career. Before this season, Marchand had spent all of four minutes away from Bergeron in his entire career. It would be impossible to separate the two, let’s say. Thanks to Bergeron’s early-season injury, we got a glimpse (and Don Cheadle didn’t even arrive!) of what Marchand is like without #37. It wasn’t pretty.

Pastrnak’s 92 goals the past three seasons rank him fifth in the league in that time. It’s more than McDavid, or Tavares, or Crosby. His 198 points rank 13th, ahead of names like Draisaitl, Panarin, and Gaudreau. He doesn’t seem to get nearly the pub that others in the highest-echelon of scorers get, but that’s what he is.

And what’s more is that he hasn’t always needed Bergeron to produce. Whereas Marchand’s metrics crater without his center, Pastrnak’s hold steady. While together they produce a nearly 60% CF%–and over three years that’s just stupid–Pastrnak’s away from Bergeron’s hold at 50%. This season that difference is smaller at 57% to 53%. Over his career, the scoring-chance percentage difference for Pastrnak with and without Bergeron is 60%-50%. It’s the same this year, though Bergeron has the same spilts without #88. The high-danger chances are the closest marks, both at 55%-53% split over Pasta’s career and this year. For comparison’s sake, Marchand’s numbers dip into the 40% ranger without Bergeron.

Pastrnak isn’t the deadliest shooter you’ll find, as his 14% or thereabouts shooting-percentage doesn’t have him anywhere near the top marksmen. He’s 11th in total shots, so he gets there through volume, averaging over three shots per game. And when you’re skating with Bergeron most of the time, you’ll be in the right end enough. Pastrnak should probably be shooting even more, but defers to his linemates.

That does leave this Bruins team in something of a conundrum. They clearly lack scoring beyond the top line, and that’s if David Backes is in the lineup as he can’t do much anymore. It’s clear that Marchand needs Bergeron, but would slotting Pastrnak with David Krejci on the second line give opponents more to think about? The Bruins can one-line-ending-the-world their way through the regular season, and that’ll probably see them easily gain the third playoff spot in the Atlantic, though they’re still tangled up with Montreal and Boston for that and the wild card spots.

But when the spring rolls around, can you beat Tampa or Toronto with just one line? The Leafs might not have a defense, but they can throw Matthews or Tavares and Bergeron and at least hope to break even, and then watch their greater depth run the Bruins over. That’s basically what happened against the Lightning last year. Would Pastrnak-Krejci at least be a different question to ask teams? The Bruins might have to think about it.

Considering the numbers he puts up, Pastrnak’s $6.6M hit is a borderline steal. Which is good, because the Bs are clearly going to need to bring in another winger or two in the summer if they want another run with Bergeron and Chara still around. At only 22, it’s a little frightening to think where Pastrnak could go from here. If the Bruins have to move on from this era to the next one soon, it’s clear whom they are going to do that around.

Tags: Boston Bruins Brad Marchand David Pastrnak not like the other Patrice Bergeron