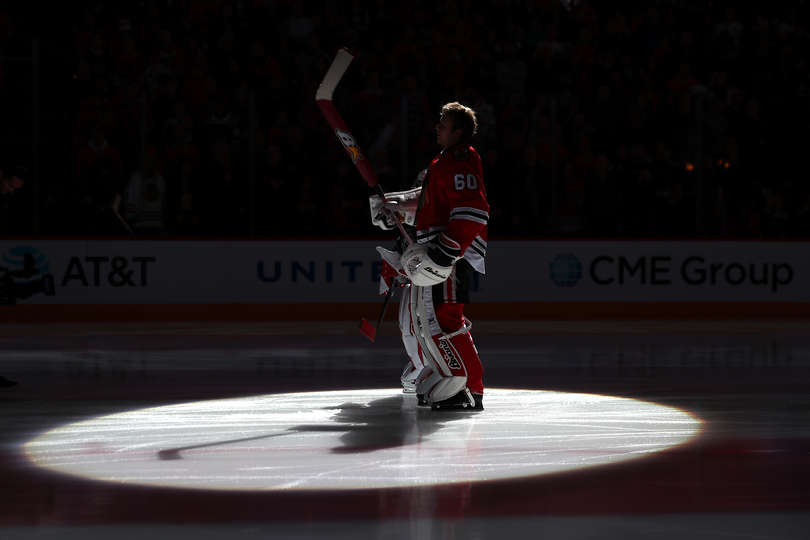 After a piss-poor first, the Hawks piled on the offensively anemic Wild in the final 40. By all the metrics except the score and the save percentage, the Hawks had no business winning this game. Good thing they don’t let us fuckin’ nerds make the rules. To the bullets!

– Forty-six saves on 48 shots. Collin Delia had himself a hell of a night tonight. The Wild needed a man advantage to score both of their goals, and neither of them were his fault (they were Seabrook’s. More on that later.). The only real knock against him was his rebound control, especially early on, but he kept it clean when it mattered most. There’s no reason outside of injury or diarrhea that should keep Delia from starting Saturday, and unless he gets completely domed, he should also start the Winter Classic, if not for performance than because it would be a sin against God and the Irish not to start a guy who spells his name the brogueish “Collin” at Notre Dame. Again, 46 saves on 48 shots, and both goals required a man advantage.

– Kane got his hat trick, and man, that creep can roll. No one has evangelized for the Gustafsson–Kane connection harder than I have, and the reason was clear on Kane’s PP goal. It was a simple play—Toews wins the faceoff, Gus walks the line, Kane fires a one-timer short side—but it’s on the power play, which all of a sudden looks deadly.

Kane’s first goal was all him. When Gustafsson took the shot fake and skated around Kunin, I thought he had given himself a nice lane to take a decent shot. Then he fucking passed it. Normally, this would have been a bad pass and a missed opportunity. But Kane kicked the puck to his stick in traffic and flicked it by a porous and soon-to-be-pulled Devan Dubnyk. There are a handful of players who could have gotten a shot off on that pass, let alone scored, and Gus should thank his stars that Kane’s one of them.

– Brandon Saad did a good deal of fucking tonight. His first goal took a bit of luck from Toews behind the net. After receiving a pass from Kahun—who himself was feisty tonight—Toews tried to thread one to Saad, and it ended up bouncing off of Zucker and straight to Saad. After last year’s unlucky debacle, it’s about time Saad got one to bounce his way here. His second goal came off a brilliant DeBrincat steal. With Stalock coming out of the goal to play the puck forward, DeBrincat batted his pass out of mid-air and swept it to a wide-open Saad, who sneezed it over the goal line. His 11+ CF% Rel was also best for third on the Hawks, behind Sikura and DeBrincat.

– Dylan Strome had a ton of opportunities tonight that he just couldn’t cash in, but he was in all the right places. He’s got five points in his last two games, and one can only wonder how much more it could be if he had DeBrincat flanking him rather than Artie the Obelisk.

– It’s been a while since we’ve had to gripe about Brent Seabrook, mostly because Coach Cool Youth Pastor has hidden him as far away from meaningful time as possible. But tonight was different, though not necessarily by choice.

Seabrook was on the ice and out of position on both goals. On the first, the PK2 unit found itself stranded on the ice for 1:30. With about 15 seconds left, Granlund moved in on Seabrook at the far circle, forcing Seabrook to step up, which is not a phrase you want to hear outside of “Seabrook stepped up to cheer on Henri Jokiharju (FINLAND POINT) from the press box and got jalapeño stains on his suit.” Granlund then floated toward the top of the circle, opening up Seabrook on the inside, and hit Staal with a pass. Staal’s shot was blocked by Delia, but it allowed Staal and Parise time to set up behind the net. After playing catch, Staal swung behind the net for a wraparound, and Seabrook got caught between playing Staal behind the net and Parise in front. Seems like you’d want to cover the guy who’s in front of the net rather than behind it, but Seabrook’s hesitation allowed Staal to take the wraparound and Parise to sweep in the rebound.

On the second, Seabrook managed to screen his own goaltender and vacate the spot from which Staal scored. This one was a bit more excusable, given how quickly the play developed, but still not great. There’s not much we can do about it other than grumble, but when Seabrook and Keith were together, they got overwhelmed. No more of that.

– Dominik Kahun was active all night, even though the stats show paltry evidence of it, aside from his secondary assist on Saad’s first goal. His best play of the night came about halfway through the second. Carl Dahlstrom broke on a rush, only to have the Hawks turn it over in the neutral zone. Murphy gummed up a 2-on-1, giving Kahun time to get back and lift Staal’s stick as he wound up for a pass from Zucker. It would have been a hard shot for Delia to stop, and Kahun prevented it all with strong stick work.

– David Kampf was good on the PK tonight, logging just over four minutes. He was on the ice for the Wild’s not-really-a PP goal, but aside from that, he battened down the hatches. If he had just a bit of scoring touch, he probably would have had a goal too, as Kane hit him with a smooth drop pass (the good kind) and left him with a wide-open shot that Stalock denied.

– Though it’s a minor gripe, I’d like to see Sikura and Perlini switch back up. Neither was particularly noticeable tonight in their respective spots. It didn’t hurt, but it also didn’t help.

– Toews got his 400th assist tonight. Good on him. If anyone deserves a statue, it’s Toews.

In the first time in about 10,000 days, the Hawks had the tools to win a post-Christmas-break game. They’ll travel back to my backyard on Saturday, where the only excuse Colliton will have for not starting Delia will be because he ate the fattest edible known to man and took advice from drunk Patrick Roy. The Hawks are on a bit of a roll now, and if the shit fits, wear it.

Line of the Night: “Have to get Forsling and Seabrook off the ice. They’re out of gas.” Eddie O., saying what we’re all saying.