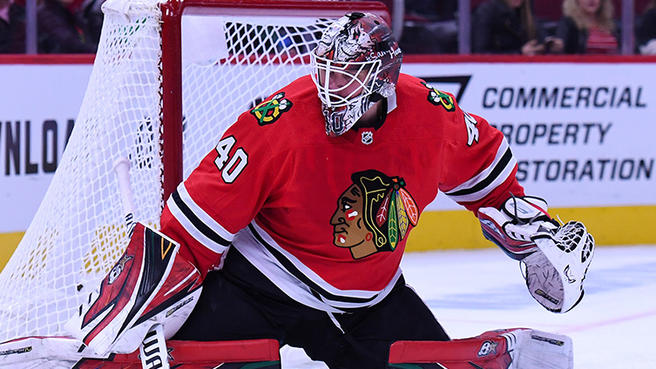 So the Hawks managed to come back and win against a good team the other night, only to turn around and get their asses handed to them by a bad team. Such is life these days with this team. Let’s get through it:

–The first period was the Devils personifying why their state has a reputation for trashiness. They took a grand total of seven penalties in the first, including a nasty boarding on Kirby Dach, Wayne Simmonds slashing Crawford, and that’s just what got called. There was another dangerous hit on Connor Murphy that went apparently unnoticed by the officials. The Hawks should have come out of the first with a commanding lead, but instead they were tied at 1. Why? Mostly because our power play was clown shoes, and the Hawks were just as messy as the Devils were malicious. Dennis Gilbert made a STATEMENT with a useless fight against John Hayden (who would have the last laugh with a goal that made it clear the game was getting out of reach). And of course, the broadcast was ejaculating all over the fight but it did absolutely nothing to help the Hawks win a period they should have owned.

–And Adam Boqvist got hurt, so there’s that. I’m honestly not even sure which play it was but given the Devils’ physicality it could have been a few different ones. That doesn’t matter at this point; what matters is that our co-top prospect now has a bum shoulder, which is the same issue as Calvin de Haan is dealing with so the timing really couldn’t be worse. Hopefully it’s not that bad, and given Boqvist’s tender age he has a chance at healing quickly, but it’s literally the last thing the Hawks needed to deal with tonight.

–Just when you thought the first period was bad…then the second period happened. The Hawks were just completely outplayed, and yes, by the New Jersey fucking Devils. They gave up 23 shots in the second (not a typo). After leading in possession with a 62 CF% in all situations in the first, the Hawks plummeted to a 37 CF% in the second (using all situations because of the rampant power plays and 4-on-4’s). Oh and they gave up four goals, leading to Crawford getting pulled (when it was 4-1, and Lehner gave up one more for good measure). The numbers will tell you the story, but for those of us watching it in real time it was painfully clear the Devils were in control the whole time. Dumb shit like Alex Nylander making a blind backwards pass that was nearly a goal, Gustafsson nearly giving up an own goal, the defense screening Crawford leaving him helpless—it was a completely lopsided performance.

–And about all those power plays, can we just agree that Erik Gustafsson is terrible as the QB? He really shouldn’t be on the top unit, but now with Boqvist (the natural replacement) injured, the Hawks are truly fucked. Anyway, Gus was either too slow with a shot or making a bad pass or turning it over, as is his way. Never forget—they could have traded him last year.

–Hearing the crowd cheering as Robin Lehner came out to replace Corey Crawford just broke my heart. I don’t even know what else to say. Yes Lehner has been great lately but Crawford kept them in this game as long as was humanly possible. The Severson goal he should have had, I’ll give you that. It was a fairly soft five-hole goal. But that came after a crazy sequence where he made about four highlight-reel saves while the rest of the team stood around holding their dicks looking confused. His own defense screened him on the goal prior to that (I believe it was the one prior, if not, it was the prior prior one). I know Crawford is the least appreciated player by the press and the general hockey world, but it kills me when our own fans don’t know better.

–And besides, Lehner gave up a goal on the first play of the third period, so everyone cheering for him can fuck off. The shorthanded goal he gave up late in the second wasn’t really his fault…this team is really, really bad at defense.

Alright, this one was ugly. It was the counterpoint to what was probably their best game, and definitely their best third period, against Colorado the game before. But inconsistency is par for the course right now, so let’s all take a moment, enjoy Christmas if you celebrate it, and find out which Hawks team is showing up on Friday against the Islanders. Onward and upward…

Line of the night: “Give me a soft serve swirl and you’ve got a happy Irishman.” —Pat Foley, with the best possible phrasing to make birthday treats sound incredibly X-rated.