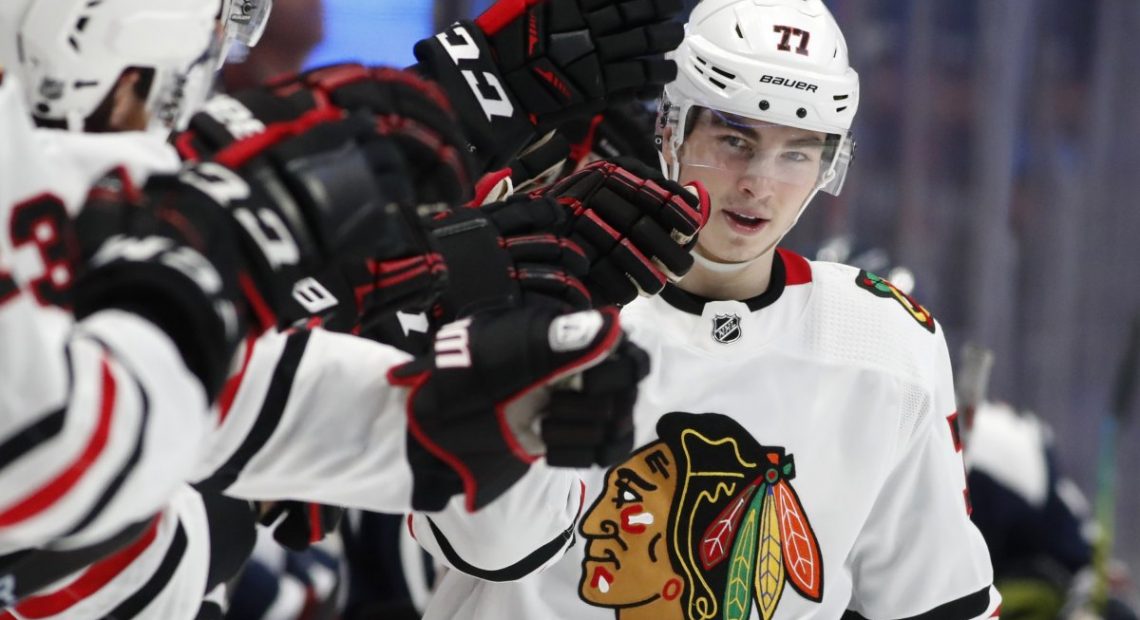 Your delayed recap! And it’s for a win! And a fun one! Let’s not wait around, shall we?

-There’s been a tenet around here for the entire time we’ve been doing this. Which makes it mesmerizing, and a little sobering, that it’s still true after all these years. But…when Duncan Keith is good, the Hawks are good. It’s really been that simple. Toews and Kane steal the headlines, which Keith is only too pleased to let them do, and they certainly are a large part of it. But no player has been a bigger barometer to the Hawks’ fortunes, nor more responsible. He can’t do it every game at 36, and that’s not on him that the Hawks haven’t found another solution. But on the nights he can, the Hawks actually look like a representative team.

Keith was everywhere last night, in a good way, in the way that it used to be. And he did it nursing along Adam Boqvist (more on him in a sec) and behind this still very fractured lineup. He didn’t end up on the scoresheet, but his influence would have been hard to miss. It even included kicking off the Hawks’ “hit or die” attitude on the night. The broadcast wanted you to think it was Gilbert’s fight. No, it was Keith laying Donskoi on his ass that everyone followed. It’s not a huge part of his game, but sometimes you forget that Keith is still about as sturdy as a fire hydrant and has that in his locker when needed.

We haven’t seen this Keith much over the past couple seasons, Some of it is age, some of it is thinking the coach is a moron and the team is headed in the wrong direction. He still thinks the coach is an idiot, and the team is still headed in the wrong direction, and he’s still old, but maybe through just professional pride or wanting to help the young players or whatever, we’re seeing this Keith more often. We should enjoy it. How much longer will it be around?

-The other tenet is “names on the sheet.” When the scoresheet has a lot of Kane and Toews on it (used to be Hossa and Sharp too, and the hope is Top Cat and Dach Holiday will take that role soon), the Hawks win. This is pretty simple stuff of course, as every team needs their best players to be their best players. The Hawks need it now especially, as they don’t have the cast of thousands to chip in. Toews wasn’t possessionally (it’s now a word fuck you) dominant, but got the goal that got the Hawks back in it and then kicked off the plays for their second and winning goals. Kane did Kane stuff.

Toews is also on a point-per-game pace his last 25, after that initial worry.

-The season still remains about what Dach and Boqvist become. It’s unfortunate for Dach that the only thing we really have to compare him to developmentally is Toews, because he’s the last center the Hawks took this high in the draft. Toews had a year of college before showing up, which probably makes a bigger difference than we think. At least as a freshman, you’re playing against other players your age or above. Dach wouldn’t have got that in Saskatoon, so he’s here. So there’s a higher learning curve, as he figures out what works now and what will work later.

You got a glimpse last night, as not only was Dach making things happen he was also not afraid to power through physically. As Fifth Feather pointed out on the podcast, we don’t know what Dach will be physically, because he’s got 20-25 pounds of muscle to put on yet. Which is kind of scary for everyone else.

Dach was put behind the eight-ball lately a bit, saddles with Zack Smith and Matthew Highmore or the like. Not only are they unskilled, they’re slow. So Dach could charge through the neutral zone and look around and see the world has abandoned him. With DeBrincat and a mobile space-opener in Carpenter, he’s got options to play off of. His goal showed off his hands and reach, because that was hardly an easy pass to catch and a chance to finish.

-To Boqvist. It feels, so far and there’s such a long way to go, that the Hawks are going about developing him the opposite way of how they should. Instead of just letting him be Adam Boqvist and figuring out where to shave off, they’re stripping him down and figuring out where to be Adam Boqvist. Compare that to how Duncan Keith came up. The stakes weren’t as high of course, and he had a full season in the AHL. But one thing you could say about Trent Yawney and Denis Savard is they let Keith be Keith and run around everywhere like he’d gotten into the pixie sticks. And then in time he figured out how to mold that into an NHL game.

Boqvist seems to want to move the puck along as quickly as possible, even if it isn’t to anyone. He is tentative to skate with it in his own zone. When the Hawks were trailing in the 3rd and they had to let him off the leash, you got a couple views of what he can do. Not only does he pinch but he’s so quick he’s getting to the puck at the circle instead of at the line, which gives him space to make a play. But he shouldn’t be trying to be Connor Murphy the rest of the time, and trying to spot when to be Adam Boqvist. It should be the opposite.

-The Hawks were intent on finishing checks last night, which is a good way to keep a much-faster team from getting away from you, especially if they’re not totally locked in. And without Makar, the Avs don’t really have another d-man to start transition so putting them all under pressure is going to cause turnovers and mistakes. I don’t know if the Hawks can play this way all the time, but it wouldn’t hurt to try.

-We occasionally get people asking us why we still do this, because our writing has gotten morose and despondent at times lately. And I understand the question, because it can seem like we’re not enjoying ourselves at all. I shouldn’t speak for everyone else here, but games like last night are why I’m still here. Because it’s still fun when they win a game like that. It’s still fun to watch Toews force his way into chances because he feels like it, or Keith to be an ice-wide blanket, or Kane to conjure something out of nothing or making a finish look that simple. It’s fun to get a vision of what Dach can do and might be one day. It’s fun to watch Connor Murphy drag Gustafsson by the dick into competence. We hope that we see more of it of course, and it’s that hope that keeps me around, I guess.