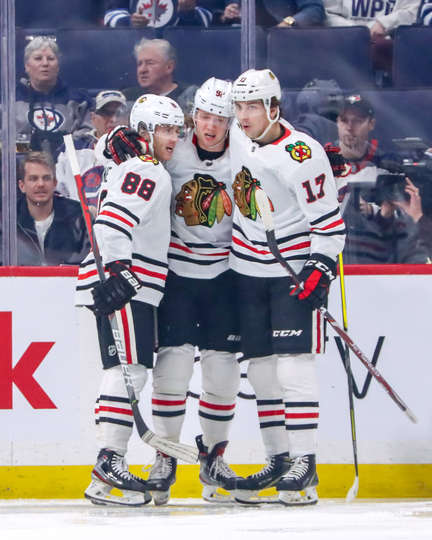 Sometimes, all you need are a couple of individually brilliant performances. The Hawks had all the consistency and cleanliness of a Taco Bell–hosted afterparty toilet bowl, but came away with a decently dominant victory. Let’s wrap it.

– Patrick Kane gave as many fucks as he could tonight. When that creep gives a fuck, it’s breathtaking what he can do. He directly contributed on all four Hawks goals and managed to make Alex Nylander look like a smart trade not once but twice. On the first goal, Kane took a chip pass from Strome up the far boards, took his time scanning for options, and fired a Royal Road pass that Nylander just had to run into for a goal.

On Kubalik’s goal, it was Kane’s aggressive and outstanding backchecking (what the fuck?) that led to a steal from Scheifele and an easy pass to a totally uncovered Kubalik. If you needed any evidence that Kane was entirely locked in tonight, this is the best example.

And what do you know? When Gus and Kane cycle even a little bit on the power play, it opens up a ton of space. Rather than having Gus pick his ass at the point while Kane puckhandled on the near boards, the two simply switched spots, which drew defenders toward Kane at the point, giving Gus a wide-open lane for a one-timer. It was 366 days ago that the Hawks’s power play woke up last year doing exactly this kind of thing.

And for the coup de grace, Kane took a cross-ice pass from Nylander and wristed a laser by Hellebuyck, getting Adam Boqvist the secondary assist in the process.

Kane made everyone look good out there. That creep can roll.

– It took Kane’s Atlasian effort to push Robin Lehner out of the top spot for tonight. Another 37 shots on goal and just one goal allowed for the 1B goalie, including a few remarkable saves in the second. The Hawks got pantsed bad in the second frame, which is turning into a trend when they play the Jets, but Lehner navigated them through it. It’s definitely fun to watch Lehner make heroic saves, but you still have to hope that Stan is at least thinking about making or taking some calls on him, especially if he can get a for-sure prospect for him. This team is clearly in rebuild mode, and after Saad’s injury, Lehner is likely the best trade piece they have now. Something to consider.

– We’re still waiting for Adam Boqvist to really flash the flair we were all promised, but tonight was at least encouraging. He had a couple of decent break ups in his own zone and led all Hawks D-men in CF% (53+) and xGF% (70+) with Keith as his partner. This is exactly the kind of play Boqvist should be shooting for, for now. You’d still like to see him quarterbacking the power play at some point, but tonight was a step in the right direction. Credit to Jeremy Colliton for having the stones to put him on the top pairing.

– Kirby Dach was the only other Blackhawk beside Lehner to have a decent second period. He’s still in the good-idea-not-so-good-execution stage of his offensive development, but you can see the vision on display most of the time. Once he stops baby giraffeing with the puck near the net, he’s going to be a dangerous centerman.

– Alex Nylander had two points tonight. Though he sort of fell into his goal, that he was in the right spot is seriously encouraging. And his cross-ice pass on Kane’s goal is what you imagine Bowman traded for in the first place. For now, it’s a flash in the pan, but it’s at least encouraging.

– Dominik Kubalik led all Blackhawks in CF% (58+) and xGF% (82+). Though he might not be a top-tier player, he’s got potential to be another Brandon Saad, which is a good thing to be.

– Saad’s injury was to his ankle tonight, rather than the knee injury we assumed it was. It wasn’t pretty, but there might be hope that it’s not a season ender.

– It was a fun victory, but it’s still concerning to see shit like this: 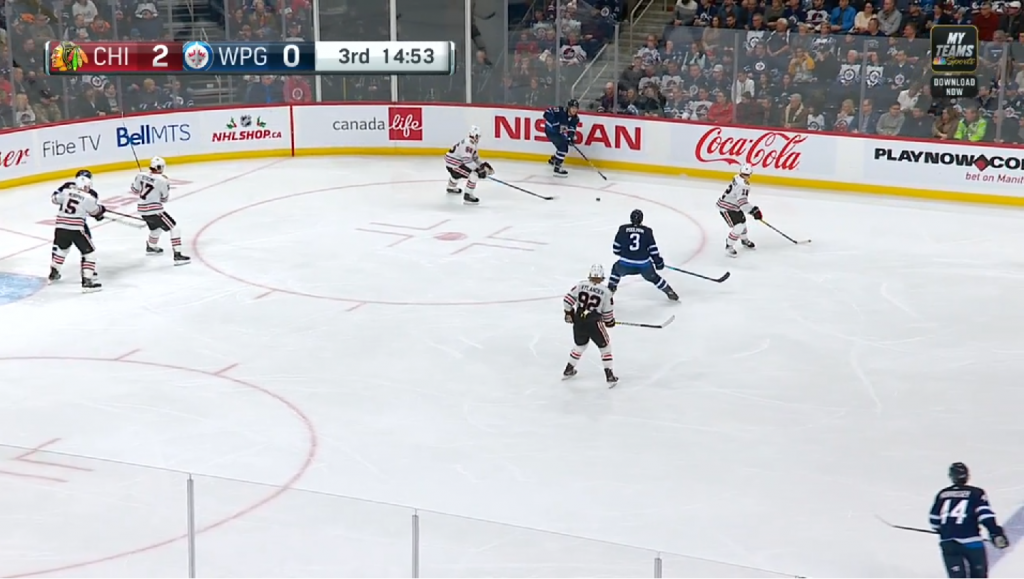 This is the setup for Poolman’s goal. There’s no reason for Dylan Strome to be that low, especially with Murphy covering his man. With DeBrincat eying the point, Nylander needs to be able to read the play and at least make an effort to cover Poolman here. Again, this is Strome’s fault for being that far out of position, but if Nylander’s only going to score once every 16 games, he’s got to up his awareness on plays like these.

It wasn’t entirely pretty, but it doesn’t need to be. On to Colorado Saturday.

Line of the Night: “We were short and hard.” –Dennis Gilbert describing things during an intermission interview.